The $5 Billion Crypto-Loan Market Bubble Is Bound To Pop 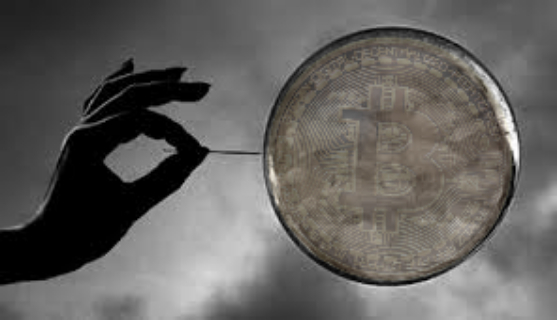 The laws of finance still apply in cryptocurrency’s parallel universe.

Crypto credit has expanded too quickly and is headed for a blow-up, says a group of former Wall Street traders who are now seeking riches in digital assets. A near $5 billion industry has emerged from nothing just two years ago and the number of loan platforms is rapidly proliferating, according to blockchain data company Graychain Ltd.

The picture they paint sounds all too familiar to traditional finance pros: lax lending standards, too much money chasing too few borrowers and increased risk taking. While the volume of loans outstanding is too small to shake the wider world, the worries serve as a cautionary reminder of how new technologies can’t do away with finance’s boom and bust cycles.

Read more: How Bitcoin’s crash paved the way for a derivatives market

“What keeps me up at night is not adoption, or even regulatory uncertainty: it’s credit risk,” said Jason Urban, a former trader at DRW Holdings LLC and Goldman Sachs Group Inc. who is now chief executive officer of DrawBridge Lending in Chicago, which extends crypto credit. “The torpedo below the waterline is an MF Global-Lehman Brothers type event.”

The world’s newest credit market grew out of the ashes of the 2018 collapse in digital assets. Holders who didn’t want to sell their virtual coins at depressed prices either loaned them out to earn interest or posted them as collateral to raise cash. The business also allowed traders to borrow coins for short selling.

That’s how Michael Moro’s lending business at his New York-based firm, Genesis, began — financing bets against Bitcoin. Genesis is among the biggest providers of digital credit, having extended more than $2 billion of loans to institutions since March 2018.

In a standard Bitcoin loan, a Genesis client posts $1.2 million of collateral for every $1 million of Bitcoin borrowed, paying annual interest of about 5%. The rate has declined from about 11% at the outset. If the price of Bitcoin increases during the term of the loan, the borrower must post additional dollars or else face liquidation; if the price declines, borrowers could reclaim some collateral.

“Whether folks understand risk is where the scariness comes in,” said Moro. “I see more competition and that leads to prices that don’t make sense relative to the risk and collateralization.”

Still, while some worry the market has grown too fast, others say there is no build-up of risk. Alex Mashinsky, founder of lending platform Celsius Network, said loans are made almost entirely to institutions that have strong compliance and risk management procedures. The real risk facing crypto is highly leveraged crypto derivatives sold to unsophisticated individual investors, he says.

Zac Prince, CEO of lending business BlockFi, said his firm which is backed by investors including Michael Novogratz’s Galaxy Digital Holdings Ltd., has stringent standards and has never experienced a late payment or loss. Meanwhile, Antoni Trenchev, a former legislator from Bulgaria who co-founded lending company Nexo, says his firm encourages “under-leveraged borrowing,” meaning loan-to-value ratios of no more than 50%.

It’s hard to gauge how great the damage might be from a credit event: it could go unnoticed in the wider economy, while possibly causing a decline in the value of crypto assets if a wave of liquidations results in forced sales, said Genesis’ Moro.

If nothing else, crypto lending could serve as a cautionary tale of how new technology does not obfuscate the need to pay attention to foundational concepts like credit risk.

“Crypto is still a small market relative to traditional asset classes, however, the feeling of deja-vu is there: lack of regulation, cheap credit available with minimal due-diligence, and broad optimism,” said Matthieu Jobbe Duval, who is currently designing a crypto-lending business for CoinList, a fundraising platform for blockchain companies.