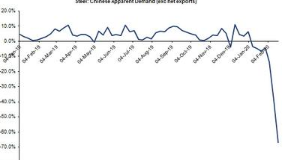 In our ongoing attempts to glean some objective insight into what is actually happening “on the ground” in the notoriously opaque China, whose economy has been hammered by the Coronavirus epidemic, last week we showed several “alternative” economic indicators such as real-time measurements of air pollution (a proxy for industrial output), daily coal consumption (a proxy for electricity usage and manufacturing) and traffic congestion levels (a proxy for commerce and mobility), before concluding that China’s economy appears to have ground to a halt.

These observations were subsequently reaffirmed when we showed that steel demand, property sales, and passenger traffic had all failed to rebound from the “dead zone” hit during China’s Lunar New Year hibernation.

Meanwhile, as every investor scrambles for clues to find the upward inflection point in China’s economic output which would at least partially validated the unbridled euphoria in the stock – and, ironically, the bond market – we have some unpleasant news: more than one week after our initial report on “alternative” high-frequency (read daily) indicators in China’s economy, any tangible improvement in China’s economy has yet to be observed.

We start with some base commodity market observations courtesy of Goldman Sachs, which when looking at preliminary weekly demand data, finds that:

According to Goldman’s Adam Gillard, the above implies full country apparent demand is down a massive -66% y/y.

Picking up where Goldman (and we) left off, UBS writes that while there are official announcements for each province or cities to end the extended Chinese New Year (CNY) holidays, “the actual work resumption faces many constraints and is hard to track.” And so, piggybacking on what Capital Economics did previously, UBS constructed a China Daily Activity Tracker to assess real time development, which covers many of the same indicators we have already noted previously including:

Alas, as we have noted previously and as Goldman shows above, UBS’ indicators show that “China’s activities remain very subdued vs the same time after previous CNYs.”

Here are some of the Swiss bank’s key observations:

UBS also constructs a Heat Map by province in Fig 5 to show each province’s index change compared with their previous low on Jan 25-26 (CNY day). As one would expect, there has been virtually no rebound for the vast majority of cities.

Passenger volume: Latest daily passenger volume is only 19% of that in the same period during CNY travel season in 2019 (Fig 12). Overall, total numbers of passengers carried has been around 18%, or 82% below, the 2019 level!

Accumulated passenger volume since the CNY day is 308mn person*time, 18% of 1.7bn person*time one year ago. While the drop is partly due to cancelled trips, a big part is likely due to delayed returns of workers, who will eventually come back over the coming weeks, assuming of course China manages to contain the coronavirus and the population believes the communist government.

We then move to a similar daily-activity tracker, this time from Goldman which confirmed the terrifying paralysis China’s economy finds itself in:

Daily coal consumption of major electricity producers was still 33% weaker in the first 18 days of February this year than normal seasonality would suggest. Needless to say, one can’t claim there is even a remote possibility of a return to normal if electricity output (and demand) is running almost half compared to where it was this time last year.

The real estate market remains frozen. As Goldman notes, daily property sales volume in 30 major cities over the past week has climbed up to 13% of the average level in the previous 5 years. It was better than the 0% it was for much of the previous week.

Last but not least, while hardly coming as a surprise, movie box office revenues have been unchanged for the past three weeks, and remain frozen… at zero!

And, as we noted previously, one can argue that the most ominous chart is not what is frozen in China right now – which is almost everything – but what is soaring. Thanks to Capital Economics we know what that is: food prices.

As we warned previously, a paralyzed economy, with 750 million people in some form of lock down, where the people are becoming increasingly angry at Beijing’s now openly over propaganda, where countless workers will soon be fired as companies run out of funds, and even more companies will soon be bankrupt due to lack of ongoing operations, and where the price of food is surging makes for the most volatile combination possible, one which if not arrested soon could lead to a very violent climax.

Putting it all together, one may ask why are global stocks not only not falling but are in fact soaring to record highs? The answer, as Goldman accurately puts it, is that “rightly or wrong, it just doesn’t matter because investors continue to price policy support.“

Market sentiment is still on. Most clients have priced in that more loosening in liquidity and property will come. Tomorrow the Feb LPR data will be out and consensus is 10bps cut as MLF rate cut. Treasury futures may see some correction unless the rate cuts is greater in magnitude. But my survey shows that the short term sentiment will not be hurt. From retail wise, we have seen craze from retail subscription of mutual funds recently and Foresight, an all-star PFM, has raised Rmb12bn within 8hours which made the new record high in history.

In short, don’t worry about a thing, the Fed’s got this.

Once upon a time we used to joke that if the world is facing an apocalyptic situation, stocks may hit “limit up” because all traders would ask is when the Fed will start buying stocks, as Janet Yellen said last week the central bank will probably do in the next crisis. Unfortunately, it is no longer a joke.