Subprime Auto Loans Are Defaulting At Fastest Rate Since 2008 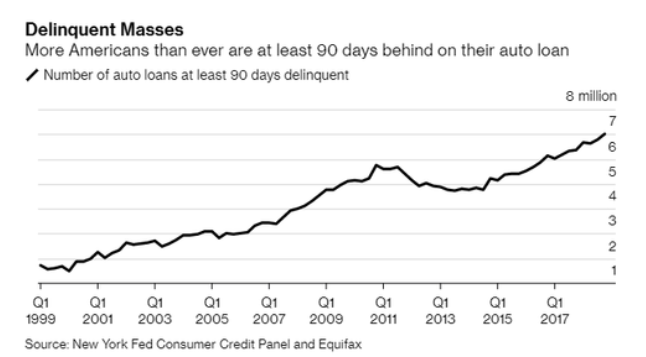 A growing portion of Santander’s subprime auto loans are starting to sour sooner – and at an accelerating rate, according to Bloomberg.

Now, loans made as recently as last year are going bad at the fastest rate since 2008, with “more consumers than usual” defaulting within the first few months of borrowing. Many of these loans had been packaged into bonds after being consummated.

Santander is one of the largest subprime auto lenders in the market and the quick failure of its loans could be an indicator that some of its borrowers are getting loans based on fraudulent application information, a problem that the company has grappled with in the past. It also shows that weaker consumers are struggling.

During the housing crisis last decade, one of the indicators of application fraud was when mortgages started to fall behind within months of being made.

Santander’s issue comes as delinquencies for auto loans across the industry are at the highest levels since 2011.

Many of the bonds that are going bad have been sold by Santander to bond investors, but the company is often obligated to buy these bonds back when the debt sours too soon after being sold. This shifts the losses back on to Santander.

Kevin Barker, an equity analyst at Piper Jaffray said: “This could eventually be a problem for the company and impact its actual performance. Souring loans can cut into profitability. The company can raise its lending standards to reduce losses on new financing it provides.”

Santander “does repurchase loans from its securitizations for various reasons, which have been consistent over time and in line with the requirements of our transactions,” a spokesperson for the firm said. She also claims that the firm’s asset-backed securities performance has been “consistent over time”.

The firm has said on recent conference calls that it is less likely to cut deals with borrowers that fall behind on their obligations now, which results in the lender writing off more bad loans.

As of June 30, Santander had $26.3 billion in subprime auto loans that it either owned or had bundled into bonds. This sum represents nearly half of the company’s total managed loans. Meanwhile, borrowers who were behind on their loans ticked up to 14.5% from 13.8% a year earlier.

The uptick could be tied to the company’s efforts to win more business from Fiat Chrysler, after tightening its partnership with the automaker in July. The agreement came after Fiat said it was considering starting its own financing arm in the U.S.

But, on the other hand, the uptick could also just be a sign that the weakest borrowers are slipping further into financial trouble as the global economy continues to grind to a slowdown. The number of borrowers 90 days late on their car loans is growing and, at the end of 2018, the number of delinquent loans exceeded 7 million, the highest in two decades.

And lenders don’t seem to be tightening standards in response. Roughly 21% of new auto loans made in 1H19 went to subprime borrowers, which is an increase from last year’s pace. These subprime loans amounted to about $61 billion.

Instead, as we have pointed out here on Zero Hedge, banks are making increasingly longer-term loans for cars, which is actually a sign that they are willing to take on more risk by waiting longer to get paid. Terms of loans reached an average of 72.9 months in Q2, a record high.

There have been signs that Santander has eased some of its underwriting practices, in fact. For a $1 billion subprime bond that priced earlier this year, the company verified fewer than 3% of borrower incomes, another story we covered back in the beginning of September, as it happened.

The decline in Santander’s income verification levels meant the obvious, we said at the time: “…that there is a higher chance of borrowers having weaker credit profiles than they have stated.”

Santander didn’t comment back in September, but instead pointed to information on its earnings calls stating that the percentage of income verification has decline as the company is working to refine its processes of screening high risk dealers and borrowers from its securitizations.

We joked at the time that this meant just giving up on income verification altogether? Sadly, it looks like that’s the case.

And while Santander Consumer has generally chosen to repurchase loans that defaulted early to improve the performance of its securitized deals, it was also required to do so following a settlement with Massachusetts and Delaware in 2017, after the states alleged that the company should have known its high cost loans were not affordable for borrowers.

As Bloomberg points out, “Santander Consumer is the only subprime auto asset-backed issuer that has contractually made this promise.”

For another series of bonds, Santander found itself buying back 6.7% of the loans that were issued – much higher than average for a deep-subprime auto lending business.

The rapid defaults reflect “borrowers who should have never received loans in the first place,” said Frank McKenna, chief fraud strategist at PointPredictive.

He continued: “We’ve always drawn a link between EPDs and fraud. We found that depending on the company, between 30% to 70% of auto loans that default in the first six months have some misrepresentation in the original loan file or application.”

Moody’s analyst Matt Scully said: “The situation is somewhat perverse in that bondholders are actually benefiting from high early-payment defaults through the repurchases.”

Santander Consumer is the largest securitizer of subprime auto loans, having sold close to $70 billion of bonds backed by subprime loans since 2007.

But don’t worry, this time it’ll be different. We’re sure everything will be fine and we’re just overreacting…