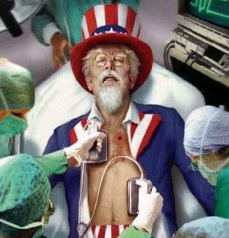 The biggest political issue over the next fifteen years may be changing conditions that affect how much Social Security can pay.

This would include the decline in the ratio of those who are paying into the system to those collecting. Once this was as much was some forty-two to one. Today the ratio is down to about three to one. That ratio will probably fall further, which would likely require more cuts and higher taxes. Rachel Greszler complains that more tax increases, already pending in Congress, are the most likely solution.

Social Security’s problems are the classic problems of every government social “insurance” program (Social Security is nothing like an insurance company, which is tightly regulated and required to carry huge reserves, which can’t be loaned out for political reasons as Social Security surpluses have been).

For instance, the first generation of Social Security recipients tends to do very well. At the Social Security website there is the heartwarming story of Ida Mae Fuller. She got a great deal. She was the first recipient of Social Security. She paid a few dollars and ended up collecting tens of thousands of dollars over some thirty years (she lived to be 100).

But in the history of social insurance the second generation usually doesn’t do nearly as well as the first. After a generation or two, there are no more Ida Mae Fullers.

And by the third generation the government is often scrambling to pay for the system, warned economist Lester Thurow. The Social Security system is sometimes hobbled by pricey politically inspired benefit increases that often happen just before elections, as I wrote in “The Disastrous Social Security Deal of 1972.”

The pesky Social Security issue is: how much should the government tax one generation of taxpayers to pay for the benefits of another? This tricky question haunt this much-debated program, which when it began in 1935 was projected never to have taxes of more than six percent.

But debates over the program’s funding do go back to Social Security’s founding in 1935. That’s when President Franklin Delano Roosevelt’s treasury secretary wondered about its long-term financing.

“They would place all confidence in the taxing power of the future to meet the needs as they arise,” Morgenthau wrote. “We do not share this view.”

However, here Clinton seems to disagree:

He [FDR] basically said, look, here’s the deal: You pay, you’re taken care of; you have Social Security in your old age.

Indeed, here is the essence of the debate over this crown jewel of the modern American welfare state. The problem is that how far that “care” extends is debatable. Republican congressman Carl Curtis in the 1950s questioned the program’s benefits. He cited Section 1104 of the original Social Security Act.

Section 1104 and Social Security’s poor investment returns, critics say, mean that neither has security nor is “taken care of.”

Facing the huge challenges of paying for the system, some even suggest that Social Security payments might be “means tested.”

Means testing would result in some who have paid into the system over decades but have also privately saved getting nothing.

Impossible? Not at all.

Section 1104 of the original Social Security law gives Congress complete control of benefits. The controversial clause. It was designed to give government “flexibility.” Under Section 1104 Congress “reserves the right to alter, amend or repeal any provision of this act.”

So Social Security, unlike a paid-up contract with an annuity company, has no legal obligations. Benefits and taxes are whatever Congress says they are. And what if crushing debts someday put the government in a corner?

With a Social Security system under stress, some taxpayers could get nothing or possibly be paid in devalued dollars.

Section 1104 was affirmed in the U.S. Supreme Court’s famous 1960 Flemming v. Nestor decision. It held that the widow of someone who had paid into the system for years and lost his citizenship was not entitled to any benefits.

Writing for the majority in the 6–3 decision, the court defended Social Security’s action:

To engraft upon the Social Security System a concept of accrued property rights would deprive it of the flexibility and boldness in adjustment to the ever-changing conditions which it demands.

However, Justice Hugo Black, in a minority opinion, said,

the Court consoles those whose insurance is taken away today, and others who may suffer the same fate in the future, by saying that a decision requiring the Social Security system to keep faith would “deprive it of the flexibility and boldness in adjustment to ever changing conditions which it demands.” People who pay premiums for insurance usually think that they are paying for insurance, not for flexibility and boldness.

no private insurance company in America would be permitted to repudiate its matured contracts with its policyholders who have regularly paid all their premiums in reliance upon the good faith of the company.

The government has shown bad faith for generations.

Taxpayers are forced to pay into Social Security with the implicit promise that they are getting a good deal, at least as good as if their money had gone into private investments. This is a broken promise that goes back to the founding of the system.

In the 1935 Congressional report on the first Social Security law, the program’s framers wrote,

We can’t ask support for a plan not at least as good as any American could buy from a private insurance company.

It is time to make good on that promise.

It is time to at least give taxpayers private options.

It is time to improve the American savings rate, so vital if we are to achieve high growth rates.

It is also time to give a young generation a chance to accumulate significant private assets that many of us in the older generation have.