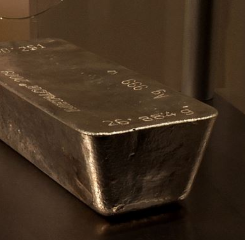 The big news this week was the drop in the prices of the metals (though we believe that it is the dollar which is going up), $57 and $1.81 respectively.

Of course, when the price drops the injured goldbugs come out. We have written the authoritative debunking of the gold and silver price suppression conspiracy here. We provide both the scientific theory and the data. So we won’t say anything more about it today.

On 17 Feb, we wrote about the widening bid-ask spread in the spot markets for gold and silver. The spread in silver was around 2 cents (up from where it had been humming along at ½ cent until about a year ago), then just over 1 cent. By mid-February, it was over 1.5 cents.

“We would expect widening spreads to cause / be caused by lower volumes. Whether we get rising prices or falling prices, as a result of this, remains to be seen.”

The spot silver bid-ask spread closed the week at well over 3 cents. Here is a graph zoomed in to show just the last month.

We emphasize that one should analyze spreads rather than look too much at price charts. When a spread changes, it is telling you something.

When the bid-ask spread widens, it is telling you that liquidity is drying up. Suppose you run a used-car lot. Bill Average comes in with a 2016 Honda Accord with 50,000 miles on it. You might give him $19,000 for it, if you know that later in the day you will likely have a buyer who pays you $20,000.

It’s pretty easy to see why he dealer lowers his bid when there is uncertainty about when he can sell it. It’s a bit harder to understand why the offer is raised. So let’s look at two reasons for that.

The first applies to a used-car dealer. Suppose the supply of 2016 Honda Accords is intermittent. For example, Honda has a sale and gets lot of people to buy a new car. So many dump their old ones. But a few months after that, there are not many more used cars coming to the market. If you have one or two in stock, you might mark up the price.

We will look at whether this is occurring in the silver market, below.

But first, consider the market maker for precious metals. He takes no price exposure, hedging all of his trades. I.e. when he buys a bar of metal he simultaneously sells a futures contract. When he sells the bar, he buys back the future he sold short). Or, to be more technically precise, we should say that he seeks to take no price exposure.

Of course, the spot and futures trades may not be executed at precisely the same time, due to internal processes or the market. There is always a short window of time, during which the market maker has price exposure.

If market conditions cause this window to lengthen, or if price volatility during this window increases, the market maker must lift his offer price (and drop his bid). His spread must cover the risk of execution slippage on his hedge as well as make a profit.

Finally, the market maker has costs of doing business. These include compliance, regulatory capital requirements (e.g. Basel III), and of course the cost of credit to finance its metal positions. If these costs rise, then he has no choice but to either widen his spread or exit the business. A number of banks have exited in recent years.

Let’s take a look at the Friday intraday silver price and May basis. The price fell over a buck, from $17.74 to $16.67. Clearly the market action was the selling of something. Was this something futures or spot metal?

The basis shows us that the price move was driven by the selling of futures. That is, speculators are repositioning (either by choice or perhaps under stress elsewhere in their portfolios).

When that futures contract owner decides to sell it, the bank reverses the trade. It buys back the contract, and sells the bar. So the metal comes back out of the warehouse.

Another way of saying that the metal is coming out of the warehouse is that the inventory levels of the market makers are dwindling. Could that cause them to raise their offers? At the same time that they may be dropping their bids because of uncertainty about the buyer.

Whatever the cause, we predicted a likely price move. We got it in spades.

Our next prediction is twofold. One, if stocks continue to crash (and Treasury yields continue to drop) then the price of silver could drop a bit further. But, unless more silver metal comes to market and basis recovers, backwardation should provide increasingly firm support as the price declines.

If we had to guess, we would not expect silver stackers to panic and sell their metal at this point. Those who own the metal today likely hold it for reasons other than false certainty of endless gains (which did occur at certain times in the past). However, if economic hardship hits them, they may be forced to unload silver to put food on the table. This may seem premature in the US, but we will write about our observations in Asia. Here is one picture Keith took in the virtually empty Jewell Mall attached to Chiangi Airport in Singapore.

No one discounts seafood that’s kept live in a tank until the moment you order it. They just buy less from their suppliers. Except under one condition. When they are surprised by a sudden collapse in demand. Chiangi and Jewell are normally quite crowded. Now, they are eerily empty. Eerie like 2009.

Perhaps this restaurateur (and many others in that mall) is selling metal in order to keep the lights on, and wait for traffic to return.

We need to say two things about the breathtaking plunge in 10-year Treasury yield. It closed 2019 at 1.9%. It closed February at 1.1%. That is, it dropped 0.8 percentage points. That is, in two months, over 40% of the yield has been sucked out of it.

Two, this is not due to coronavirus. The yield has been evaporating from bonds for 39 years, and the present leg down began in November—over a year ago in 2018. If your favorite economist had been calling for rising interest rates (as a rebellion by investors against rising consumer prices), perhaps it’s time for a new economist.

The US is traveling down the trail blazed by Switzerland, Europe, and Japan. America is just lagging behind. Its economy is a bit less phlegmatic. Thus, there is a bit higher bid on the interest rate. The trend is clear. Demand for credit does not come in size, except on a downtick in rates.