Second $1,200 Stimulus Checks Could Be Coming But Not Enough For Rent 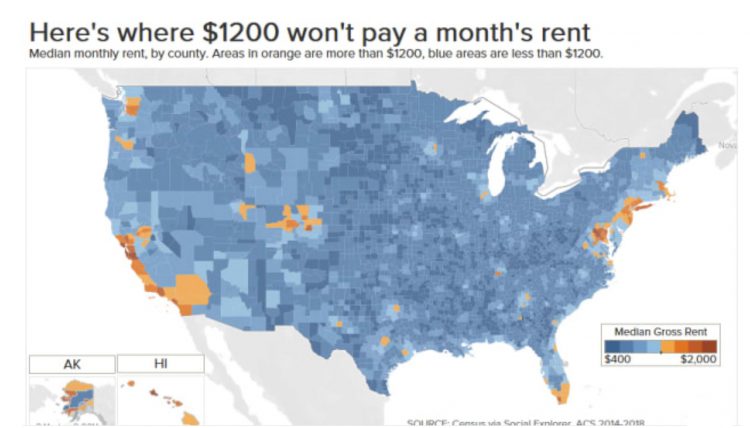 Negotiations over the next coronavirus stimulus package on Capitol Hill ended the week in a stalemate.

But there’s one form of help lawmakers reportedly agree on: a second set of stimulus checks.

That’s as the unemployment rate fell to 10.2% in July. While that is an improvement, about 1 in 10 Americans can’t find work.

Washington lawmakers are at odds on how much extra federal unemployment to provide to jobless workers. Democrats want to continue the extra $600 per week through January. Republicans have proposed reducing that to $200 per week through September, followed by a 70% wage replacement through December.

Trump’s executive order would extend the enhanced unemployment pay at $400 per week, after the benefit expired last month, though this is likely to face legal action over his authority to do that absent Congressional assent.

Trump also moved to extend an eviction moratorium on that also lapsed in July.

Democrats have called for extending eviction protections, both in the House stimulus legislation and another plan put forward by Rep. Maxine Waters, D-Calif. The House has voted yes to both bills.

The crux of the political impasse is that the parties are at odds over how much they want to spend on the new coronavirus stimulus package. While Democrats have come up with a $3 trillion plan, Republicans have said they want to keep the cost at around $1 trillion.

Some politicians who want to limit the total cost have argued that the $1,200 stimulus checks could help make up for curtailed aid in other areas.

But a look around the country shows that one-time payments of up to $1,200 per individual won’t cover one months’ rent in many areas. Even with a moratorium on evictions, people will eventually have to pay back rent unless additional relief is provided.

A call for more targeted aid

Experts including Chuck Marr, senior director of federal tax policy at the Center on Budget and Policy Priorities, have argued that the stimulus checks are not targeted aid.

It would be better for the government to focus its spending on other aid first, Marr said, for unemployed workers, renters at risk of eviction and families without access to food.

According to a CNBC analysis of Census data, in many parts of the country, $1,200 isn’t even enough to cover the median monthly rent payment. (The median is the middle in a list of numbers).

The map above shows where individuals will have the hardest time making their rent if they plan to cover it with their $1,200 stimulus checks.

The 11 counties where it would be most difficult to stretch those payments were mostly in California or Virginia.

One exception to was Nantucket County in Massachusetts, which came in at No. 10.

Meanwhile, the 13 counties where median rents are well below that $1,200 were spread across the country.