Saxo Bank: “We Are Putting Out An Early Warning: A Sharp Correction In Equities Could Be Imminent” 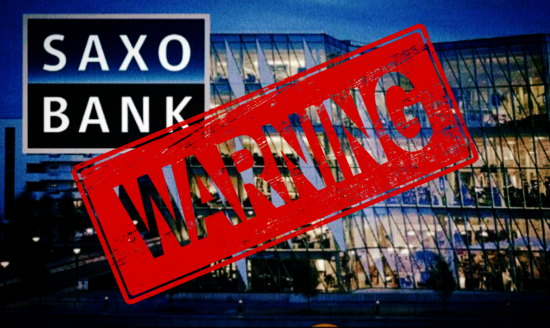 Equities are getting frothy with short squeeze and momentum accelerating technology stocks higher. This has led to the highest top five concentration in the S&P 500 eclipsing the dot-com bubble in a sign of destabilisation and increased fragility.

We are putting out an early warning to investors as a sharp correction in equities could be imminent. Our overall longer term view is still positive on equities, but sharp moves up are typically followed by rapid declines. In today’s equity update we also talk about equity valuations and earnings season.

The first two weeks of the year have seen a tremendous acceleration in technology stocks with the sector by far outperforming all other sectors. As we talk about in today’s Market Call podcast we are witnessing an epic short squeeze in Tesla and other heavily shorted stocks.

In higher echelons of the market the FANG+ Index is accelerating at an unprecedented pace showing clear signs of frothy behavior. It mimics the move leading up to the volatility explosion in February 2018. While we laid out our asset allocation view yesterday as overweight Europe and EM equities, and overweight equities vs bonds, the short-term dynamic could get ugly here when the short squeeze and momentum have exhausted itself.

In VIX we are observing a increase in net positioning although from a very low level but could signs that bigger players in the futures and option markets are preparing for increase in volatility. On the other, the forward curve in VIX futures is still not sending any distress signals, but these things change fast and the catalyst may be very subtle.

The rapid rise of the large US technology stocks has catapulted the five largest stocks on market value to reach an index weight of 18%, the highest level observed in the S&P 500 in 25 years. Increased concentration risk is a clear sign of fragility increasing and the system is destabilizing underneath the surface. It’s historically a recipe for violent moves so it should definitely be on investors’ radar.

As we hinted at in our equity update yesterday the equity valuation expansion might be fueled by investors anchoring their long-term interest rate expectations at a continuing lower level increasing the equity risk premium and hence allowing higher multiples on earnings. With the lower anchoring and dual stimulus coming from the monetary and fiscal side we cannot rule out that equity valuation will reach new all-time highs before the party ends. But the current move seems too aggressive, and the probability of a sudden large drop in equities could happen anytime.

The earnings season kicks into gear today with the first big names (Citigroup, JPMorgan Chase and Wells Fargo) reporting Q4 earnings. Consensus is looking for strong EPS y/y figures for JPMorgan Chase and Citigroup due to base effects from a very weak Q4 2018. Wells Fargo which is a more pure banking play is expected to show slightly negative y/y EPS growth.

All there financials are expected to show negative q/q growth numbers. But overall analysts are looking for decent numbers from financials compared to other industries. In aggregate S&P 500 is expected to deliver its fourth straight negative y/y EPS growth in Q4 for the first time since the financial crisis.

However, the real price action lies in the outlooks which should be improving given the recent macro backdrop and better signs coming out of Asia.