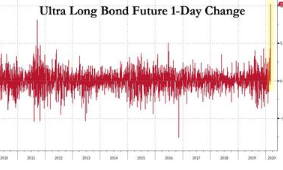 Back in December, the BIS laid out a stunning, and heretofore unknown assessment of the factors leading into the September repocalypse: not only was the overnight repo surge to 10% a function of supply (or lack thereof), with banks – primarily JPMorgan – pulling liquidity from the repo market causing a panic scramble for any incremental dollar (end eventually forcing the Fed to open up its overnight and term repo lines for the first time since the crisis), but an arguably more important reason for the Fed stepping in to restore liquidity was that countless hedge funds were indirectly funding massive Treasury pair trades using repo, or as we put it, “the BIS found that hedge funds exacerbated the turmoil in the repo market with their thirst for borrowing cash to juice up returns on their trades.

Here is what the BIS said:

US repo markets currently rely heavily on four banks as marginal lenders. As the composition of their liquid assets became more skewed towards US Treasuries, their ability to supply funding at short notice in repo markets was diminished. At the same time, increased demand for funding from leveraged financial institutions (eg hedge funds) via Treasury repos appears to have compounded the strains of the temporary factors.

“High demand for secured (repo) funding from non-financial institutions, such as hedge funds heavily engaged in leveraging up relative value trades,” was a key factor behind the chaos, said Claudio Borio, head of the monetary and economic department at the BIS

The BIS’s finding was novel, and surprising, as it highlighted the “growing clout of hedge funds in the repo market” according to the FT, which notes something we pointed out one year ago: hedge funds such as Millennium, Citadel and Point 72 are not only active in the repo market, they are also the most heavily leveraged multi-strat funds in the world, taking something like $20-$30 billion in net AUM and levering it up to $200 billion. They achieve said leverage using repo.

Focusing on the trades in question, one increasingly popular hedge fund strategy involves buying US Treasuries while selling equivalent derivatives contracts, such as interest rate futures, and pocketing the arb, or difference in price between the two.

It was the fear that this arb would suddenly dislocate in chaotic fashion, culminating in a cross-asset liquidation cascade, that spooked the Fed into activity in September, forcing it to inject over $600 billion in liquidity in the ensuing months via both Repo and QE4.

Which brings us to today, and this morning’s unprecedented move in the Ultra long bond future…

… which has already swung higher by over 10points, is the biggest one-day move in history!

… with catastrophic consequences for all those who listened, which based on trading desk rumors includes 2 especially large hedge funds, which are also getting crushed this week on their equity exposure.

The good news, for now at least, is that there are no notable dislocations between 30Y cash and Ultra futures – the clearest indication that someone has thrown in the towel, and there is a tradable arb in the most liquid security in the world, one which nobody wants to take advantage of due to counterparty risks. However, it is only a matter of time before the cracks do emerge, at which point the only question will be who it is that just blew up…