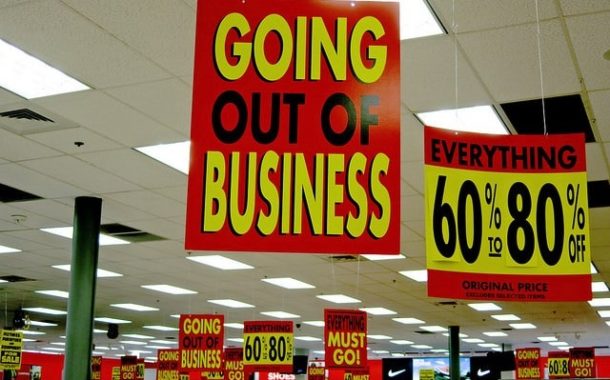 The Big Bad Wolf, also known as Jeff Bezos, huffed, puffed, and blew brick-and-mortar establishments down once again in 2019. The Amazon gods triggered another bout of hellfire and brimstone from the retailpocalypse, a corporate cataclysm that intensifies with each passing year. Unfortunately for these vendors, there is no respite in sight as even some of the biggest brands in the world have failed to adapt to the evolving digital conditions. Despite a modicum of optimism on The Street over the future of brick-and-mortar, the latest figures and stock performances suggest these stores’ crusades are no match for the Prime forces. Will these physical outlets capitulate or continue bleeding red ink in the 2020s to take on the Bezos empire?

Just how bad was it out there? According to a new report by Coresight Research, 9,302 stores shut down or were going to shut down in 2019, a 59% increase from the previous year. Leading the way were Payless ShoeSource (2,100), Ascena Retail (781), Gymboree (740), Fred’s (564), and Sears (210). A dozen or so well-known brands had shuttered doors in the last year, including Gamestop, Foot Locker, Victoria’s Secret, Office Depot, and Abercrombie & Fitch.

It was another year of widespread bankruptcies as 23 companies declared insolvencies, up from 17 in 2018. The most notable Chapter 11 case was Forever 21, the fashion retail giant that could not mirror its domestic success in foreign markets. The other one was Barneys New York, the high-end department store chain that reported more than $100 million in assets and liabilities.

It was not all doom and gloom, though. The upside, researchers found, was that more than 4,500 new locations opened in 2019. One-third of these new locations were dollar stores; so, we are not talking about opulent outlets. Coresight’s final tally also fell short of its earlier forecast of roughly 12,000 store closures.

Consumers have proved over the last couple of years that they are willing to open their wallets and splurge on everything from apparel to electronics. Thanks to higher wages, low inflation expectations, and stronger purchasing power, shoppers have been on a spending spree. However, department stores have yet to catch a break and attract a portion of those consumer dollars.

Could the tide turn in 2020? Or will e-commerce reign supreme over the next decade?

Because there were six fewer shopping days this holiday season, there was a lot of emphasis on Super Saturday. The final Saturday before Christmas turned out to be a record-breaking event as it posted a one-day sales record of $34.4 billion. This topped Black Friday’s $31.2 billion and Cyber Monday’s $19.1 billion. Everyone must have flocked to Amazon and Walmart’s website, right?

Surprisingly, according to data from mobile payments solution firm Square, online sales accounted for just 9% of receipts for retailers that maintain both an online and offline presence. What the figures show is a so-called bricks-and-clicks business model that involves investing in pop-ups and taking advantage of buy-online-pick up-in-store gimmicks.

It made more sense for shoppers to go offline since the shipping cutoff dates were more common in the weekend before Christmas. By the time Super Saturday arrived, just about half of consumers reported to be finished with their holiday shopping, so these people wanted to buy their gifts in person and walk home with these presents the same day.

Foot traffic remained low at most shopping malls, but the conversion rate – the percentage of shoppers who went to the mall and made a transaction – edged up. Even the department stores ostensibly enjoyed their best weekend of the season.

Analysts are wondering if this might be the catalyst that can reignite the shopping mall and the retail store. Probably not, since this season’s trends were most likely a calendar anomaly. It is true that some companies are doing an admirable job of connecting offline and online and making in-person shopping more interactive. It might be counterintuitive, but e-commerce-first businesses excel at brick-and-mortar initiatives far better than the traditional enterprises.

Indeed, digital shopping is here to stay thanks to innovation, ingenuity, and investments. Over the next year, fulfillment options will expand, dynamic pricing will drive sales and profits, and e-commerce tool kits will diversify (real-time conversations, chatbots, artificial intelligence, and machine learning). Online is embracing evolution, while offline is a lifeless corpse.

Perhaps the retail real estate market is correcting itself after years of suffering an over-store problem. But consumer trends, shopping habits, and behavioral patterns all point to people continuing to purchase Agatha Christie novels for the amateur sleuth toddlers in their lives and posters of Ludwig von Mises for their teenage daughters and nieces on their desktops, smartphones, and tablets. We will see next holiday season if this was a one-off experience, or patronizing stores is the new norm.

By: Andrew Moran on LibertyNation.com