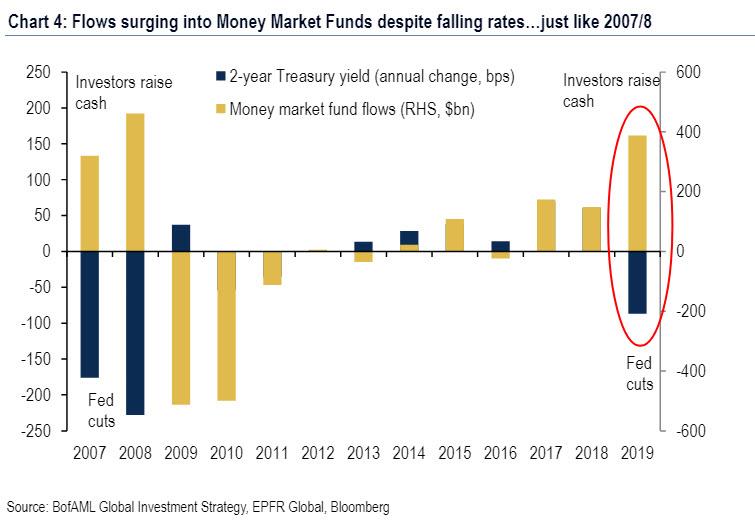 While algos continue to zig and zag, daytraing the barrage of optimistic and pessimistic US-China trade deal headlines, and stock buybacks are set for another record, with a recent report finding that cumulative buybacks YTD are already up +20% YoY compared to 2018 which was already a record year for stock buybacks…

… while insiders quietly dump stock, selling an estimated $26BN of their own stock in 2019, the fastest pace since the year 2000, when executives sold $37bn of stock amid the giddy highs of the dotcom bubble…

… retail investors are acting as if a financial crisis is just around the corner.

A recent report by Bank of America found that retail investors haven’t been this bearish since the collapse of Lehman. The bank looked at money market fund flows, which attracted a near record $322 billion in the past 6 months, the largest since the second half of 2008 when the global financial crisis was unleashed.

As BofA explains, this means that instead of putting their money to work, investors are doing the opposite and raising cash at a furious pace, expecting a market crash, even though – just like in like 2007 and 08 – rates are now falling, while the S&P 500 put-call ratio has soared to the highest since April 10.

One explanation according to BofA’s chief investment strategist, Michael Hartnett, is that investors are suffering from “bearish paralysis,” driven by unresolved issues such as the trade war, Brexit, the Trump impeachment investigation and recession fears. Underscoring this point, in the week ending Oct. 9, investors continued to aggressively exit equity funds globally, with outflows reaching $9.8 billion according to EPFR data, while allocating cash to safe havens, with bond funds enjoying $11.1 billion of inflows.

Picking up on this there, JPMorgan’s Nick Panagirtzoglou writes that the bearishness of retail investors with respect to equity funds has been getting progressively worse during the course of 2019, which as captured in the chart below, shows that retail investors globally sold more equity funds in Q3 vs. Q2 and in Q2 vs. Q1.

To the extent that this growing equity fund selling is indicative of retail investors’ confidence, or lack thereof, the JPM strategist writes that “the picture above points to waning consumer confidence reinforcing the message from the negative trend in the economic measure of Figure 3” which shows that after peaking in 2017, consumer confidence has stumbled and is now at 3 year lows.

Such diminishing consumer confidence would naturally raise further expectations of recession by both economists and markets given the key role the consumer is playing in gauging recession risks.

Indeed, the release of the October 2019 Blue Chip Economic Indicators survey which every month presents economists’ forecasts for the US economy, showed a rise in the average probability of a US recession taking place in 2020 to 39%, surpassing the previous high recorded in the February 2019 survey. This 39% probability is also the highest for this cycle. This is shown in the next chart, which depicts the probability of a US recession taking place in different years based on successive Blue Chip Economic Indicators monthly surveys conducted since 2017. There has been an upward shift in the recession probabilities pattern after each successive year and the current 39% US recession probability represents the highest reading for this cycle.

In other words, according to at least one measure, what is coming will be even worse compared to the financial crisis – after all, this time economists see what’s coming; that nobody is acting on it yet, is a different matter.

As Panigirtzoglou recounts, a decade ago, “we had to wait until the December 2007 survey for the probability of a US recession taking place in 2008 to approach 40% and it was only with the February 2008 survey conducted, after the 2008 recession had started, that this probability went above 50%.”

Which again brings us back to fund flows, as a proxy of consumer confidence.

As JPM notes, “the vast majority of the fund universe in the world is owned by households or retail investors. And retail investors’ behavior in the fund space this year has the hallmarks of late cycle investing with outflows from equity funds and inflows into bond funds.”

As the next chart shows, the last time we saw such strong outflows from equity funds was during 2008! Admittedly Figure 4 shows that during 2008 we had seen outflows from bond funds also, in contrast to the strong bond fund inflows seen this year. But the difference is less significant than appears in the chart below, as the bond fund outflows at the time had mostly taken place post Lehman crisis once credit spreads rose to unprecedented levels post September 2008

But, Panigirtzoglou asks, “what if this selling of equity funds does not reflect fears of a recession or late cycle dynamics but rebalancing, i.e. an effort by retail investors to prevent their equity weighting from rising too much given the strong 15% rally in global equities YTD.”

Indeed the equity share in the fund universe has been hovering at pretty high levels by historical standards since the end of 2017. This equity share is proxied by the AUM of equity funds plus the equity holdings of hybrid funds divided by the sum of the AUM of equity, bond, hybrid and money market funds. And it could be considered as a proxy of how overweight equities retail investors are as shown in Figure 6 (since 1996 for US domiciled funds and since 2005 globally).

As JPM further notes, this equity fund share has exhibited mean reversion since the mid-1990s. It had increased sharply in the five years to 2017 as a result of the equity rally, with most of the increase taking place during 2013 and during 2017. The metrics in Figure 6 declined sharply during the equity market correction of Q4 2018 but all of this decline reversed in the first quarter of this year shifting retail investors to very overweight territory.

As a result, at 59% currently at a global level, retail investors are entering the fourth quarter of this year at a similar equity overweight position to the record high of the end of 2017. For US domiciled investors, the equity share is currently somewhat lower than the record high of 63% seen at the end of 2017. But at 61% this equity share is still pretty high by historical standards and equal to the previous cycle peaks of 1999 and 2006.

In other words, even if they aren’t dumping stocks because they fear a financial crisis, retail investors appear to be very overweight equities at the moment given the strong 15% rally in global equities this year. So it is possible to view their growing equity fund selling this year as an effort by retail investors to rebalance and prevent their equity weighting from rising too much rather than as a reflection of waning confidence or increasing fear of recession.

This, however, is also not good news, because even if this alternative “rebalancing” hypothesis is correct, it implies that the equity weighting of the household sector has peaked and thus retail investors are likely to limit any equity market upside from here. Therefore, as JPM concludes, “this alternative hypothesis has rather negative implications for equity markets also” asretail investors could act as a drag on equity market upside from here even if consumer confidence improves.

In conclusion, even an optimistic read of the ongoing liquidation by retail investors “poses a challenge to the bullish equity market thesis emerging from this week’s positive news on US-China trade negotiations and Brexit” Panigirtzoglou concludes, because any upside from this week’s news could be constrained by retail investors trying to prevent their equity overweights from rising too much.