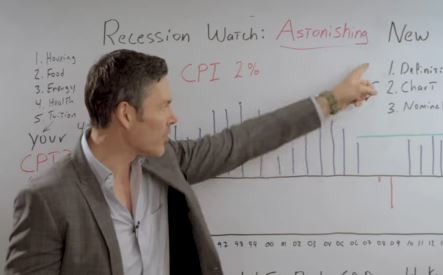 Recession ahead? Or are we in a recession now? 👉ASTONISHING INSIGHTS YOU NEED TO BE READY! 👈

The talking heads in the media and the politicians tell us unemployment is low and the economy is great. But is it? On the surface yes, but once you dig deeper it starts to get ugly. You’ll discover that it’s possible we never got out of the last recession!

That’s right, we’re still in the great recession of 2009. How can that be? It’s the governments sleight of hand with the numbers. They constantly change the way numbers, like GDP, are measured to look as if the economy is doing well. The problem is, if the numbers were calculated consistently, like they were prior to 1994, by the governments own statistics the US would be in a recession.

We never left the last recession, it’s been a great depression like period of US history. The push back whenever you imply the economy could be headed for, or in, a recession is “NO WAY, I don’t see people standing in lines for food.” What these people fail to recognize is 50% of US households receive some form of government assistance. A whopping 12% are on food stamps!! Does that sound like the greatest economy in American history? Or does it sound like the US is still in a recession?

The longest contraction since the great depression? That’s one of the huge problems with the economy now. No one sees how bad it is because the governments masks the recession with smoke and mirror tactics. You know all your friends are underemployed, if they’re employed, but you hear in the media everything is so great, you assume the recession like times must be isolated to the group of people you associate with.

Not so! Even is you use the governments cooked numbers, if you extract government deficit spending it still takes GDP negative. Once you look at the facts deeper, it’s hard to come to any other conclusion other than the US has been in a recession and the money printing by the Fed has just masked the recession temporarily.

In this recession watch video I discuss the following: