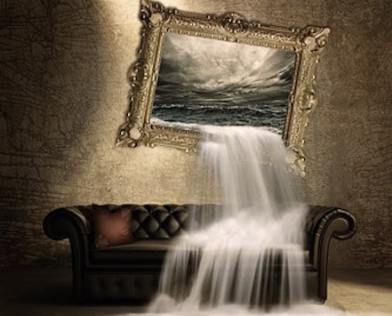 It seems as if many of the world’s engineers and scientists are going from DUMB to DUMBER and are now ending up in the category of complete STUPIDITY.  I hate to be so harsh, but there it is. If scientists are spending time inventing new ways to extract energy from rain, then we have as a society, TOTALLY LOST OUR MARBLES.

I saw a recent article on Oilprice.com titled; The Next Renewable Energy Source Could Be Rain.  After reading the article this morning, I had to provide my commentary on what I see in the world as “Rearranging the deck chairs” on the Titanic, right before it sinks.  The world is heading full speed towards the ENERGY CLIFF while we waste time and energy on really STUPID experiments.

But, of course, this is a free world… so people are free to do what they please.  However, at some point, even the SMART-STUPID people are going to have to wake up to the fact that we have RUN OUT THE ENERGY CLOCK. Thus, the new religion of High-Tech that a lot of people now believe in and likely pray to, to save us from all our problems, will likely disappoint and collapse in glorious 3D Technicolor.  Coming soon to a town near you.

Yes, that’s correct; it’s all due to our coming energy predicament.  In my last article, I said Americans are going to be in for a rude awakening, but one of my commenters on the website suggested a better term… “A CRUDE AWAKENING.”  That does seem more fitting.

So, this morning during my usual course of reading material, I came across the new renewable energy source from rain.  While rain is indeed renewable, thanks to the great lord almighty, depending on whichever one we practice and follow, what isn’t renewable is the high-tech garbage technology we stupid human mortals use to try to extract energy from it.  The late great Comedian George Carlin has to be laughing in his grave.

The article linked above stated the following about renewable rain energy technology:

The idea itself is not new. Previous attempts to generate electricity from rain drops have been made and they have all utilized the triboelectric effect: this is when certain materials acquire an electric charge after they come in contact with another material and then get separated. Think of it as a type of static, low-charge electricity. Yet all of the previous attempts have suffered the limitations of technology.

The team behind the new raindrop power generator has pushed these limits further. The researchers, from City University in Hong Kong and the University of Nebraska-Lincoln, spent two years working on the energy density of what they have called a droplet electricity generator, or DEG.

What they did was use the design of field-effect transistors – three-terminal devices that use an electric field to control the flow of electric current through them. Thanks to this design, the energy density of the DEG shot up to over 50 Watts per square meter, which is thousands of times more than the energy density of comparable devices.

This new breakthrough providing a 1,000 times more energy density from DEG (droplet electricity generator) reminds me of the amazing “Blacklight Technology” that supposedly creates the energy of the sun from some mad professor’s machine in his garage.   Now, the name of this technology was changed to “Brilliant Light Power” to attract MORE SUCKERS to invest, the very same way a lousy junior mining explorer company changes its name after it BAMBOOZLED its supply of available investors.  Thus, when you change the name, put on a new COAT OF LIPSTICK on the PIG, you can attract another group of poor unworthy slob investors.  Rinse and Repeat.

Please understand when I use that type of vernacular, I don’t believe investors are poor unworthy slobs.  However, this is how many of these mining company executives look at and treat investors.

Okay, for those individuals who are still clinging to these SILVER-BULLET energy technologies to solve all our problems, I am going to let you in on a dirty little secret.  Fossil Fuels, which still account for 80+% of our energy consumption, power (and maintain) the complex supply chains and the massive levels of technologies that run everything.

We must remember, the Labs these scientists and engineers work at are only possible from decades of BINDING TIME from the burning of millions and millions of tons of Coal, Natural Gas and Oil (especially oil).  So, when scientists walk into a lab, they take for granted all the decades of fossil fuel burning that has allowed not only our technologies to become more complex, but also the level of EDUCATION to increase and be built upon past education.

What is BINDING TIME?  Simply put, it’s the ability to STACK either technologies or education upon each other to more complex levels over a period of time. Unfortunately, the mad scientists of the world trying to solve our energy problems with DEG’s (droplet electricity generators) from rain, fail to realize they needed and continue to need highly condensed energy from fossil fuels to make it all work.

Here’s a GREAT EXPERIMENT.  Cut all the power supply, materials, and products from Fossil Fuels these scientists use and let’s see how much energy from rain these EINSTEINS can extract??

So, here’s the deal in a nutshell.  Because scientists and engineers do not FACTOR IN all the energy that was burned to get the world to a much more complex high-tech level that it is today, our future energy predicament can’t be solved with more complex technology if the fossil fuel energy is running into serious trouble… and it is.

As I stated in my last Youtube video, even if we could bring on more Nuclear Power or the supposed Silver-bullet Thorium Reactors, they will not solve the problems we will have with maintaining the 11 million miles of roads in the world. HOW PEOPLE cannot understand this explains why most still believe in ENERGY MAGIC or the ENERGY TOOTH FAIRY.

Let me repeat that because people still don’t get it.  We cannot just simply PLUG and PLAY a new form of energy technology when the entire system is built upon Coal, Natural Gas, and Oil.  You cannot plug in an Electric Energy Solution into a Fossil Fuel system.  IT JUST DOESN’T WORK.  And that goes above and beyond the fact that you need to MINE, EXTRACT, PROCESS, TRANSPORT, MANUFACTURE metals and materials to construct a nuclear power plant.

Lastly, if you are still clinging to HIGH-TECH ENERGY to save us so we can continue going to Walmart, Walt Disney and Starbucks for another 100 years, maybe, just maybe, you might belong to that group of scientists and engineers who are both SMART & STUPID.