Quantitative Easing: Will It Cause Hyperinflation? (ANSWER REVEALED) 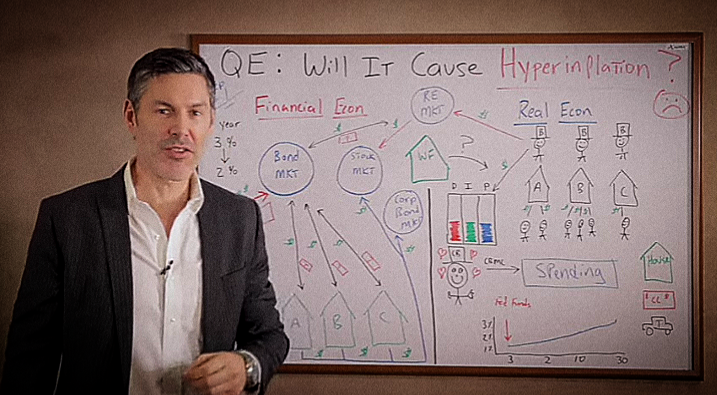 Quantitative Easing has a 👉DIRTY LITTLE SECRETS CENTRAL BANKERS DON’T WANT YOU TO KNOW! 👈And that is sooner or later if you print too much money you’ll invite hyperinflation to the table! And once the inflation genie is out of the bottle it can lead to hyperinflation.

The dollar maybe the world reserve currency, but NO fiat currency is immune to the laws of supply and demand. And quantitative easing creates huge amounts of additional supply. QE is sold to the public is a cure all for the economy. There’s nothing some money printing and quantitative easing can’t handle but what about hyperinflation?

The problem is quantitative easing is only one of two tools the central bank has, the other is lowering interest rates. But either is basically money printing.

In other words, any problem the Fed try’s to solve whether it’s unemployment, housing crash, stock crash, 2% inflation, poverty, climate change, etc. they only have the money printing tool. And if you only have a money printing hammer, ever problem you see looks like a nail.

Quantitative easing is not a cure, it’s makes the underlying ailment 10x worse. It really boils down to belief system.

The core of quantitative easing is money printing. Many people believe that, because of QE infinity, sooner or later we’ll see hyperinflation. But will we?

This is the question I explore and answer in the video.

In this quantitative easing video I discuss the following:

1. Quantitative easing as seen through the eyes of a central banker.

3 I answer the question “will quantitative easing cause hyperinflation?”