QE or Not, World’s Most Elite Bond Club Is Getting Its Mojo Back 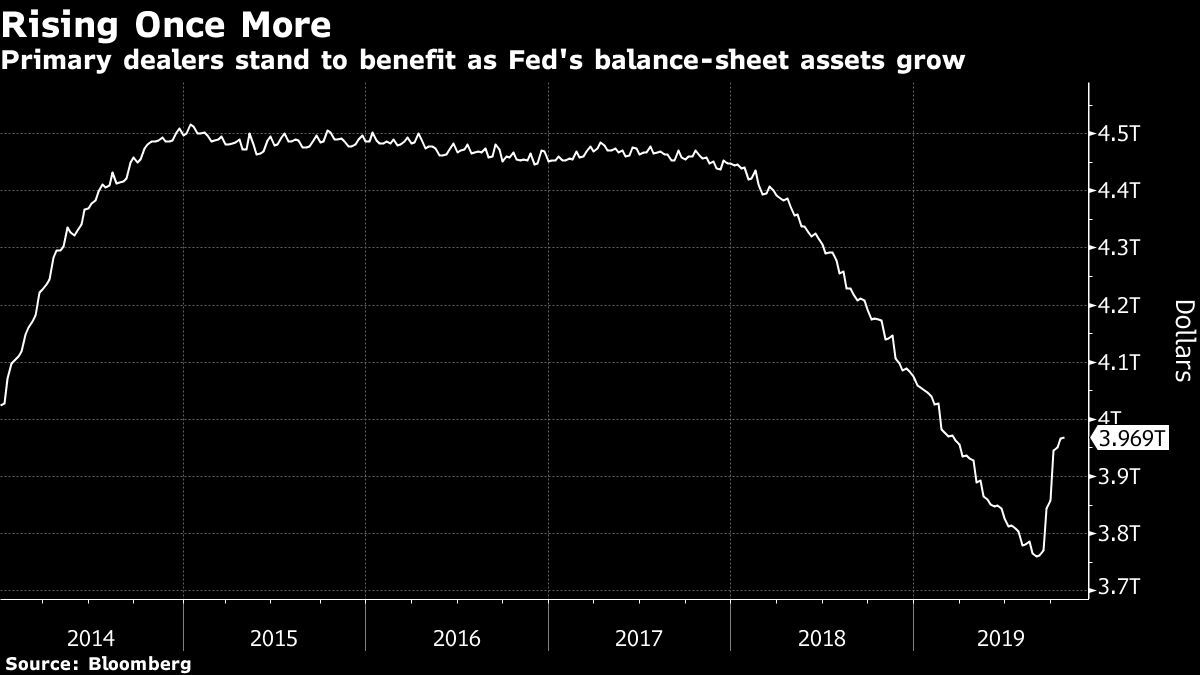 Regardless of what you think about the Federal Reserve’s decision to get back into the business of buying Treasuries, one thing is clear: It’s a good time to be a primary dealer.

While this elite-bond trading club may never fully regain its former glory, the prospect of the Fed once again purchasing hundreds of billions of dollars worth of U.S. government debt is set to be a boon for the select group of banks and dealers at the center of the $16.3 trillion Treasury market.

That’s because only primary dealers, which have to bid at U.S. debt auctions, get to sell Treasuries directly to the Fed. And as the U.S. borrows more and more to fund its ballooning deficit, having a captive buyer to offload all those Treasuries could hardly have come at a more opportune time. So while Fed officials are tripping over themselves to stress it’s not quantitative easing, for primary dealers, the fact they’re buying is what really counts.

For Citadel Securities, the Fed’s decision is a also timely one. The brokerage and market-making firm, part of billionaire Ken Griffin’s empire, has been laying the groundwork to ultimately make markets in all Treasury securities for over a year now — a prerequisite for becoming a primary dealer.

The ranks of primary dealers have slowly started to rebound after falling by more than half since peaking in the late 1980s. In May, Amherst Pierpont Securities became the 24th member and the first addition since 2016, when the Fed tweaked requirements to make it easier for smaller firms to apply.

The Fed itself “may be interested in adding more non-bank primary dealers,” said Darrell Duffie, a Stanford University finance professor who’s co-authored research with Fed staffers on repurchase agreements. In mid-September, a funding squeeze caused that market suddenly dried up, triggering a jump in short-term funding rates and briefly causing the Fed to loose control of its benchmark policy rate. “It would also help them mitigate the frictions that have surfaced in the repo market.’’

Back in the day, banks champed at the bit to become primary dealers, which enabled them to gain insights and market intelligence by trading with the Fed. But the role’s benefits have diminished as bond trading has become more regulated, consolidated and transparent.

And in the post QE-era, dealers have been saddled with more and more Treasuries, which they often financed in short-term funding markets, as debt auctions increased along with the deficit. Dealers also widely expect the Treasury to detail on Wednesday that it plans to keep its quarterly refunding auction sales at a record level. The situation proved to be a key factor in the repo-market turmoil last month.

In response, the Fed began buying $60 billion a month of T-bills and building up assets on its balance sheet for the first time since the end of QE. The purchases are intended to ease the funding pressure and help build bank reserves. It’s also pumping cash into the system with temporary repo operations. As the Fed’s counterparties, primary dealers can submit offers to sell for themselves and on behalf of their customers.

“The Fed is going to be coming in to buy a big chuck of them,” said Zachary Griffiths, an interest-rate strategist at Wells Fargo, a primary dealer. That, he said, will help alleviate concern that dealers will be inundated with supply. The U.S. deficit reached almost $1 trillion in fiscal 2019, its fourth straight increase, and economists see it widening further in coming years.

Wall Street strategists and traders also say the Fed may ultimately need to move beyond just purchasing T-bills, and include notes and bonds as well, to maintain ample liquidity in the banking system. Estimates suggest the Fed may buy as much as $300 billion of Treasuries from the open market next year. (Separately, the Fed will also replace maturing securities that it holds by buying directly from the government, helping to finance the deficit.)

“This makes being a primary dealer more attractive because they now have a non-economic buyer to sell to, which offsets some of the risk they face by having to participate in Treasury auctions,” said Scott Buchta, head of fixed income strategy at Brean Capital. “Whether that will be enough incentive to bring more in is not clear. Still, overall most people become primary dealers because it opens doors.”

To contact the reporter on this story: Liz Capo McCormick in New York at [email protected]

To contact the editors responsible for this story: Paul Dobson at [email protected], Michael Tsang

For more articles like this, please visit us at bloomberg.com