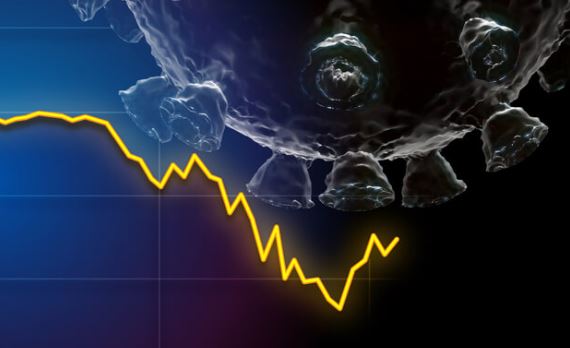 Often it is stated viewing something in hindsight is like having 20/20 vision. In this case, I am talking about the expectations of a “V-shaped” economic recovery. While such could be the case, it will likely leave everyone disappointed.

What spurred this discussion was a comment via CNBC from Federal Reserve Vice Chairman Richard Clarida:

“Our policies we think will be very important in making sure that the rebound will be as robust as possible. We’re in a period of some very hard and difficult data that we’ve just not seen for the economy in our lifetimes, that’s for sure. But a third-quarter rebound is one possibility. That is personally my baseline forecast.”

The hope for a V-shaped recovery is the basis on which the market has rallied from its March lows. The question we must answer is whether such will be the case.

You have to be careful when reading headlines, especially when they involve percentages. Most commentaries tend to be very misleading because of the misunderstanding of math.

Let me run some numbers for you to put the expected recovery into perspective.

Currently, if the Atlanta Fed is correct in its current assessment, Q2-GDP will be down more than 50% on an annualized basis. We will also assume the mainstream media analysis is correct of a V-shaped recovery. In this case, we will assume optimistic projections of a 30% recovery in Q3 and an additional 20% in Q4.

The first problem with these assumptions is that there are no previous periods in history to which we can refer to. All of these projections simply dwarf any other period of decline or recovery going back to 1947.

More importantly, for the economy to return to pre-pandemic levels, there will need to be a vaccine widely available. While there are currently more than 100 different companies working on a vaccine, there are several realities to consider.

Without a readily available vaccine, consumer confidence will be slower to recover to pre-pandemic levels. Given that consumption is 70% of GDP, a slow-return of activity will slow economic growth, employment, and wages.

As Micheal Lebowitz wrote previously, any curtailment to the “consumption function” will delay a return to economic normality.

“To review, our forecast assumes that jobs will trough in May. From June going forward, jobs will recover at the same rate and duration as in the aftermath of 2008. Using this assumption, we create the PCE forecast shown below.”

“If the historical relationship between labor and PCE holds up, and consumption continues to be the predominant contributor to GDP, we should not expect GDP to regain prior highs until 2025.”

This is where the “math” becomes problematic. A 50% drawdown in Q2, requires a 100% recovery to return to even. In the more optimistic recovery scenario detailed above, two-quarters of record recovery rates still leave the economy running in a deep recession.

Even if the economy achieves high recovery rates, it won’t change the recession. The resulting 2.5% economic deficit will remain one of the deepest in history.

Such does not bode well for employment recovery, wage growth, or corporate earnings.

The underlying structure of the economy continues to weaken as non-productive debt erodes growth. As discussed just recently in “Debts, Deficits & The Path To MMT:”

“The relevance of debt growth versus economic growth is all too evident. When debt issuance exploded under the Obama administration and accelerated under President Trump, it has taken an ever-increasing amount of debt to generate $1 of economic growth.”

Such reckless abandon by politicians is simply due to a lack of “experience” with the consequences of debt. In 2008, Margaret Atwood discussed this point in a Wall Street Journal article:

A story is a string of actions occurring over time — one damn thing after another, as we glibly say in creative writing classes — and debt happens as a result of actions occurring over time. Therefore, any debt involves a plot line: how you got into debt, what you did, said and thought while you were in there, and then — depending on whether the ending is to be happy or sad — how you got out of debt, or else how you got further and further into it until you became overwhelmed by it, and sank from view.”

Today, we have no “story” about the consequences of debt in the U.S. While there is a litany of countries that have had a “debt disaster,” they are simply dismissed. Why? Because “they aren’t the U.S.”

Before the “Financial Crisis,” the economy had a linear growth trend of real GDP of 3.2%. Following the 2008 recession, the growth rate dropped to the exponential growth trend of roughly 2.2%. Instead of reducing the debt problems, unproductive debt and leverage increased.

The “COVID-19” crisis led to a debt surge to new highs. Such will result in a retardation of economic growth to 1.5% or less. As discussed recently, while the stock market may rise due to massive Fed liquidity, only the 10% of the population owning 88% of the market will benefit. Going forward, the economic bifurcation will deepen to the point where 5% of the population owns virtually all of it.

That is not economic prosperity. It is a distortion of economics.

Interestingly, the first official forecast that incorporates the pandemic from the Congressional Budget Office agrees with our assessment.

“CBO compared its interim, May 2020 projections to the last official forecast made in January 2020. The CBO said the level of nominal GDP in the second quarter of 2020 would be $790 billion (or 14.2%) lower than previously forecast in January 2020. (That number, unfortunately, will only grow larger with time especially if the Atlanta Fed’s 52% GDP drop forecast is accurate). Subsequently, the difference between those projections of nominal GDP narrows from $533 billion. Such is 9.4% lower in the latest projection by the end of 2020 to $181 billion (2.2 percent lower) by 2030.”

While my projections are a bit more optimistic than the CBO, the shape and duration of the recovery are similar and push out full recovery until 2030.

“In real terms, the difference between those projections of real GDP shrinks to $422 billion in 2019 dollars. (That is 7.6% lower in the more recent projection) by the end of 2020 and roughly disappears by 2030. In other words, it will take a decade for the impact of the coronavirus to fade away fully and for the economy to return to its pre-coronavirus normal.”

As noted by Zerohedge, the permanent loss in output in the U.S. was shown by BofA two weeks ago. The bank laid out the pre-covid trend growth and compared it to is base case recovery.

Given the permanent loss in output and rising unproductive debt levels, the recovery will be slower and more protracted than those hoping for a “V-shaped” recovery. The “Nike Swoosh,” while more realistic, might be overly optimistic as well.

However, this is the most important point

The U.S. economy will never return to either its long-term linear or exponential growth trends.

The data is so skewed by the “shutdown” that it has rendered all recovery projections completely unreliable. As noted recently by the IMF, many traditional “official statistics” are out of date at this point. To wit:

Such is a problem for policymakers, and ultimately for the markets.

If you read between the lines, policymakers are “spit-balling” solutions and making potentially erroneous monetary policy decisions on unreliable data. However, given Central Banks’ only policy tool is more liquidity, it is a “shoot first, ask questions later” response.

The problem is those policy measures continue to erode economic prosperity. Such is evident when the CBO’s own long-term economic growth potential projections fall below 2%.

Due to the debt, demographics, and monetary and fiscal policy failures, the long-term economic growth rate will run well below long-term trends. Such will ensure the widening of the wealth gap, increases in welfare dependency, and capitalism giving way to socialism.

“So for the Federal Reserve to intervene and support those asset prices, is creating a little bit of moral hazard in a sense you’re encouraging people to take on more debt.” – Bill Dudley

What could go wrong?