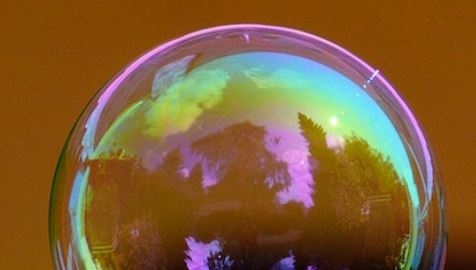 The more the policy-makers try to pump and jawbone the market higher, the worse the consequences will be on the downside when the rug is pulled out from under stocks. The trigger could be anything. Eventually the market will acknowledge and accept the fact that the economy is getting worse and earnings will continue to decline. But fundamental reality is just one of many possible catalysts that will cause a painful drop in the stock market.

For now the rising stock market is shaping the Wall Street narrative and transmitted through the mainstream media that the economy is in good shape. Funny thing about that – the stock market is not the real economy. But this is:

To be sure, rising stock prices enhances the wealth and spending capacity of the top 1% who own stocks outside of their retirement funds. But that wealth does not “trickle down” to the average middle class household (everyone below the top 1% wealth demographic). Let’s look briefly at some facts.

I’ve been making the case for several months that freight shipping volume is a valuable tool by which to gauge the relative level of economic activity:

The Cass freight shipment volume index tanked nearly 8% YoY in December. This number includes the growth in online shopping fulfillment deliveries and would have been worse if online shopping was not taking market share from brick/mortar stores. The index has fallen to its December 2009 level, which is part of the time period that the NBER has declared the economy to be in a recession.

The Cass data is reinforced by the sharp decline in the Baltic Dry Index. BDI measures global ocean freight shipment activity and is considered a leading indicator for global commodities and raw materials demand. This includes incoming/outgoing vessels to and from the U.S. Not only is the global economy, including the U.S. growing weaker, the IMF has slashed its global economic growth outlook for 2020 and 2021.

The Conference Board’s Leading Economic Index released Thursday showed a 0.3% drop vs the 0.2% decline expected. The index has now declined in five of the last six months of 2019. Without the large run-up in the stock market, the index would have fallen even more. Rising unemployment claims (hmmm…) were the largest contributor to the decline. YoY for December the index gained just 0.1% – the weakest YoY change since November 2009.

One of the false narratives being promoted by talking heads and Wall St. is the idea that the consumer is still strong. Wrong. Consumer spending over and above necessities is being driven by the easiest access to credit in my lifetime. Evidence of this is the rapid growth in auto, credit card and personal loans. And in fact more than a third of all households report using credit cards to make ends meet every month.

In fact, loan loss reserves are starting to rise at a double-digit rate at many banks and finance companies. The average consumer is stretched, a fact that shows up in the numbers that never get reported in the mainstream media or Wall Street. The last time bank financials evidence rising consumer borrowing distress like this was in late 2007. We know how that played out. This time around the bubbles are bigger, the fraud is better disguised and households and policy-makers are even less prepared for the inevitable.

This is why gold is up 24% since May 2019, outperforming the stock market and most other financialized or commodity investments. No, it has very little to do, if anything, with coronavirus fear. But it’s why the western Central Bank and bullion bank gold price managers are having a difficult time containing the rising price.