Gold Is Living Up to Its Reputation 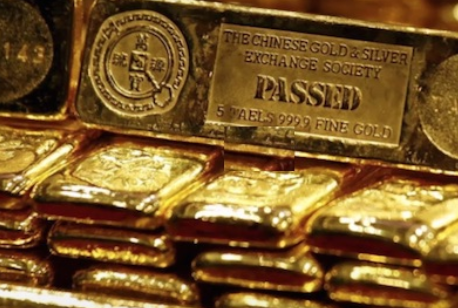 As turmoil continues in the markets with stocks selling off due to continued fears over coronavirus and its potential economic impact, Peter Schiff says gold is doing exactly what it’s supposed to do — serving as a safe haven and a store of value.

US stock markets fell again on Wednesday. The Dow Jones was up by as much as 400 points interday, but with late selling, it closed down 123.77. The S&P 500 fared a little better, with a modest drop of 11.82. The Russell 2000 was down another 19.2 points (1.2%). That index has been hammered the hardest in recent days. As Peter Schiff has pointed out, the Russell 2000 best represents the domestic economy, so it’s interesting that it is struggling despite the mainstream narrative is that coronavirus is all about a slowdown in global growth. The Nasdaq was the only index to finish positive, up 15.16 points.

Peter has been saying that this is not just fear over the coronavirus. On Fox Business earlier this week, He said its more about how central banks will respond to the virus, including the Federal Reserve.

It’s Fed monetary policy. And especially the additional easing that I think the markets are correctly starting to price in that is going to result from the coronavirus.”

Meanwhile, gold traded sideways after some profit-taking on Tuesday. Still, over the last six days, gold is up about 2% and, the yellow metal has gained around 3.6% over the last two weeks. Peter pointed out gold looks even better when you consider how much stocks are down.

If you have the Nasdaq or the Dow down 8% in terms of dollars, but gold’s up 2%, that means in terms of gold, those indexes are down 10%.”

It’s liquidity. It’s money. And if you want to keep powder dry because you think stocks are expensive, and you want to buy them in the future when they’re less expensive or when they’re cheap, I recommend that people keep their dry powder in gold rather than the dollar or even other currencies. And clearly, if you wanted to put your dry powder to work now, you would be able to take advantage of an even bigger decline if you’re buying stocks by selling gold than if you’re buying stocks by selling dollars. So, gold is living up to its reputation as a store of value, as a safe haven. Money continues to flock into gold as a result of what’s happening.”

Money also continues to flow into other perceived safe havens, including US Treasuries. Yields on US bonds hit record lows earlier in the week and continue to trend lower. Peter has said this is a giant bubble waiting to pop. In his latest podcast, Peter continued to cast doubt on US Treasuries as a safe-haven and said these are “crazy yields.”

But they continue to move lower because people believe that the Fed is going to cut interest rates as a result of the declining market and also as a result of any economic slowdown that may result from the coronavirus, or anything else for that matter. So, it is traders betting on rate cuts that is the reason they are flocking into Treasuries.”

That may be the same reason people are flocking into gold. After all, rate cuts are even better for gold than bonds. But Peter warned people are going to get burned on the bond trade, even though it hasn’t happened yet.

At some point, the people who are buying Treasuries thinking they are doing something safe are going to lose a lot of money, and they’re going to realize that they were jumping out of the frying pan and into the fire and they should have been buying gold.”

One thing investors haven’t been flocking to as a safe-haven is bitcoin. Peter said the narrative that the cryptocurrency is “digital gold” is breaking down.