Pelosi Ripping Trump’s Speech A Harbinger Of What Happens To America In 2020 Election? 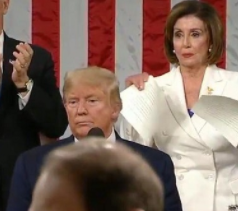 It is a rare thing to witness a truly iconic moment happen on live television, but that is precisely what tens of millions of Americans had the opportunity to do on Tuesday night.

At the conclusion of President Trump’s State of the Union address, House Speaker Nancy Pelosi ripped her copy of Trump’s speech in half in front of a nationwide audience.  We have never seen anything like that before in the entire history of this country, but of course so many unprecedented things have taken place during Trump’s presidency.  Pelosi is claiming that she did not plan in advance to rip the speech in half, and at that moment she probably wasn’t doing much thinking at all, but it is a moment that will live in all of our memories for the rest of our lives.  Pelosi shocked the entire nation by tearing the speech in two, but more importantly I believe that her action was a perfect metaphor for what is about to happen to America.  We are more deeply divided than we have ever been, and during this election season I believe that we will see very frightening eruptions of anger and frustration all across the United States.

Nobody expected Trump and Pelosi to be friendly with one another on Tuesday night, and Trump immediately made national headlines when he refused to shake Pelosi’s hand…

Pelosi omitted the customary language about it being a high privilege and a distinct honor to introduce the president. Trump then handed the traditional copies of his speech to Vice President Mike Pence and to Pelosi, but when she reached out to shake his hand, he turned his back on her.

Considering the fact that Pelosi has been leading the charge to impeach Trump for the last several months, it really wasn’t a surprise that he didn’t want to shake her hand.

But when Pelosi ripped up Trump’s speech in front of the entire nation right after Trump concluded his remarks, it surprised everyone.  The following comes from USA Today…

In a remarkable display, House Speaker Nancy Pelosi tore up the text of Trump’s speech and tossed it aside before Trump had left. Pelosi later waved the ripped pieces in the air, and audience members left in the chamber and public-viewing gallery could see Trump’s prominent signature.

I think that Pelosi will later deeply regret doing that, but I also believe that it will go down as one of the most iconic moments of 2020.

Following the speech a reporter asked her why she ripped Trump’s speech in half, and this was her reply…

So precisely what would “the alternative” have been?

I wish that somebody would have asked Pelosi that question.

One of our last surviving Tuskegee Airmen.

The survival of a child born at 21 weeks.

The mourning families of Rocky Jones and Kayla Mueller.

A service member’s reunion with his family.

Of course the left was absolutely thrilled by what Pelosi did, and they can’t say enough good things about her right now.

Sadly, this is yet another example of how deeply divided we are as a nation.

When Pelosi tore those pieces of paper in half, I believe that it was symbolic of what will happen to our entire country.

In other words, I believe that it is possible that we may have just witnessed what is known as a “harbinger”.  The following is how that word is defined by Merriam-Webster’s dictionary…

During the 2020 election season, America is literally going to be torn in half.  Right now, many Democrats absolutely hate President Trump, his family and his supporters, and that hatred is only going to intensify as we get closer to next November.

On the other side, many Republicans absolutely hate Nancy Pelosi, Chuck Schumer, Joe Biden, Bernie Sanders and all of their supporters, and that hatred will also intensify as we get closer to next November.

No matter who wins the election, the coming months are not going to be pretty.  In fact, I believe that we are about to witness the most chaotic election season in American history.

And once the election is over, a large portion of the country will not be willing to accept the result.  So I actually expect the aftermath of the election to be even worse than the election season itself.  We are on a very dangerous path, and I cringe when I think about what is coming.

To get an idea of where we stand at this moment, just consider the results of a recent Gallup survey…

According to Gallup, the 82-point partisan gap between Republican approval of the job Trump is doing (89%) and Democratic approval (7%) is the largest in the 74-year history of the poll. That gap breaks the previous record of 79 points that Trump set in his second year in office, in 2018. (Trump’s first year in office, 2017, was the sixth most partisan in history.)

But of course this trend did not begin when Trump entered the White House.

In fact, Gallup says that the “10 most partisan years in history” have all been within the past 16 years…

The 10 most partisan years in history have all occurred in the last 16 years, as measured by Gallup. Those 10 years include years from the presidencies of George W. Bush and Barack Obama as well as Trump.

“There have always been partisan gaps in ratings of president, just not to the degree seen over the past two decades,” wrote Gallup’s Jeffrey M. Jones in an analysis of the data.

No matter who wins next November, it isn’t going to heal this very deep divide.

Instead, we are about to see America ripped apart like never before.

So even though Nancy Pelosi didn’t even realize what she was doing, I think that she perfectly foreshadowed what is about to happen.

Very dark days are approaching, and the United States of America will never be the same again.