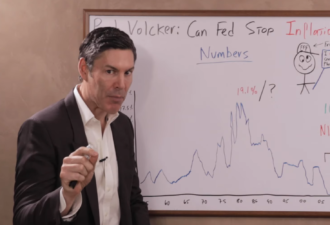 Paul Volcker, broke the back of inflation, could today’s Fed do the same?👉DISCOVER THE ANSWERS YOU NEED! 👈Paul Volcker is the legendary Fed chair who raised the fed funds rate to over 19%!

At the time Paul Volcker was incredibly unpopular, constantly being ridiculed by the press and the general public. But he had the guts to do what was necessary for the long term health of the US economy. And history will always remember the late Paul Volcker for his courage and willingness to administer the cure the economy needed to get back on track.

In a world of central bankers and politicians taking the easy way out of everything, sacrificing the future, because they don’t have the guts to do what’s right, Paul Volcker was the last of an extinct species.

If you have an interest in the future of the US economy, the dollar, inflation or hyperinflation this Paul Volcker video is for YOU!

The problem the US faces now is the debts are so much higher, a raise in interest rates would most likely bring the whole house of cards down. Paul Volcker knew this. Before he passed he made it clear, the Fed couldn’t use the same method to defeat future inflation he used in 1981. But I think there’s more to it then simple math, debt and interest rates.

The main reason I don’t think the Fed can fight inflation today, by raising interest rates, is I don’t think any of them have the guts to deal with the blow back. Our entire society now prioritizes feelings to rationale decision making. I think the Fed falls right in line. Many who work at the Fed must know their policies are exacerbating huge bubbles and the only way to stop is raising rates like Paul Volcker did, but none of them will do it because they broke the central banker mold with Paul Volcker.

In this Paul Volcker video I discuss: