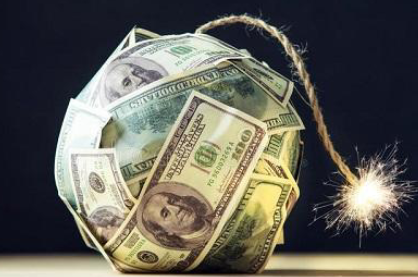 During times of financial disruptions defaults rise in importance and move front and center. The term financial crisis is applied broadly to a variety of situations in which some financial assets suddenly lose a large part of their nominal value, a default falls into this area.

In the last decade, debt has soared across the globe. With this in mind, you never want to be caught on the wrong side of a debt default. That is the place where you don’t get paid or are paid with a less valuable currency that has seen its value eroded by inflation. A debt default can take many forms but what they have in common is they all can be considered as reneging on financial obligations. Generally, we make a distinction between public and private debt but even that may become blurred when a government in need of funds has to seize or take over assets or institutions.

Relationship Of Tangibles To Intangibles

An area of great concern should be the growth in non-recourse loans, this includes unsecured personal loans. The fact these are particularly dangerous has not discouraged many investors from becoming seduced into thinking the yield justified rolling the dice and putting at least some money at risk. The chart to the right shows how intangible assets have grown, be cautious if you are owed money, that falls into the area of an intangible asset. The problem is that lenders will find little help in recovering their money from an expensive legal system that has become overwhelmed by the complexity of modern life.

An example of this is explored in a recent article by Mish Shedlock reported how changes in the bankruptcy laws have made it easier for small companies to now file and sidestep their debt obligations. Thanks to the Small Business Reorganization Act of 2019 (SBRA), as of February 19, 2020, new rules make it easier for small businesses to file for chapter 11 and to simply walk away from obligations. The law is the most significant change to the bankruptcy code since 2005 and bodes poorly for those thinking a contract is still a binding agreement.

Legislation that allows easy bankruptcy protection is a gift for anyone wanting to plot a course forward by exploiting those stupid enough to loan them money. This includes landlords and suppliers willing to extend them credit during hard times. To be clear, a default results in a transfer of wealth. This is not always clear in that the party to which the wealth is transferred may have already squandered it, this means it only reduces his financial obligations. Making it easy for someone to run up obligations and not meeting them undercuts the idea we as a society must take responsibility for our actions.

It is also important to make a distinction between public and private debt. Many investors have become seduced into thinking the backing of government adds tremendous validity to both the explicit and implied warranty that come with government-backed instruments. History, however, has shown public debt can also be mishandled, in several ways. One example from the past was how Henry VIII, in addition to engaging in an epic debasement of the currency, seized all the catholic church’s vast landholdings. While not strictly a bond default, actions such as these accompanied by imprisonment or even executions can still be considered as reneging on financial obligations. It is difficult to argue this doesn’t constitute some kind of default.

Inflating away debt is another form of defaulting on debt. We should consider the possibility that inflation has been kept in check primarily because we as a society have invested a large percentage of our wealth into intangible products or goods such as stocks, bonds, and even currencies.  If faith drops in intangible “promises” and wealth shifts into tangible goods seeking safety inflation would soar. This would drive interest rates upward and result in massive losses for bondholders. To give you a sense of what this may mean to U.S. Treasury Bond investors a 10-year treasury bond issued at a 2.82% interest rate could see a 42% loss in value from a mere 3% rise in interest rates. This means if you’d held $100,000 in these bonds before rates rise, you would only be able to sell those bonds for $58,000 in the secondary market. Please note the $58,000 you get back would also be affected by a loss of purchasing value lost from inflation.

A debt default that results from the collapse or failure of an institution, financial mechanism, or even a financial instrument and can result in a rapid shift in the value of assets. This has been witnessed time and time again as a stock suddenly becomes worthless. The word “collapse” has a way of conjuring up the image of something falling or crashing in but it is important to note subtle details of the way this occurs can have a great effect on the damage it creates. Many of the economic crises we encounter in our complex modern world have the potential to spread from one institution to another creating contagion and resulting in a destructive domino effect. The massive derivatives market that is touted as one of our modern financial tools is often sighted as having the potential to wreak havoc in this way.

Defaults often fuel the collapse of what some people label as Ponzi-type schemes, underfunded pension funds can be considered in this category.Pensions and promises will be broken so get ready for more pain. This is especially true in the public sector where the 25 largest U.S. public pensions face about $2 trillion in unfunded liabilities. One reader on another site compared pensions to a Ponzi scheme where benefits are paid out to its investors from new capital paid to the operators by new investors, rather than from profit earned through legitimate sources. I fear the future will prove him mostly right. The financial stress caused by defaults is often the final straw that brings collapse and causes things to cave in upon themselves.

This Chart Is From Before Recent Problems!

One thing is clear, we are only beginning to see the tip of the iceberg when it comes to this growing problem and just how many pensions are severely underfunded. This is a problem that exists all over the world. Remember the PBGC, America’s safety net for failed pensions has far less in the way of total assets than liabilities. A message from the head of the PBGC in the 2019 annual report states, “The Corporation is in a difficult financial position today.” He goes on to say, “Without reforms, our Multi-employer Insurance Program – the backstop that is the last resort for retirees when a plan fails is very likely to become insolvent in 2025, leaving participants and beneficiaries with significantly less than the level of benefits guaranteed by the PBGC.”

A “bank bail-in” is another way to disguise a massive default and it can happen here in America. An example of just how delusional we have become as to the fragility of our financial system is that many people have taken comfort in the efforts to control the banking sector through legislation following the 2008 crisis. The Dodd-Frank Act of over 2,300 pages allows this under Title II by imposing the losses of insolvent financial companies on their common and preferred stockholders, debt holders, and other unsecured creditors including depositors.

Many who have read my blog have indicated to me they strongly feel a major financial reset will take place in the future. Those invested in bonds should not underestimate the power of inflation to strip them of their wealth. Never before do I remember seeing so many predictions of interest rates remaining low forever and a day. We should have a problem lending hard-earned money out for lengthy periods and we should be wary. Rates are based on predictions of future government deficits and events around the world that may or may not unfold as expected. Part of a conundrum we face is that far more freshly printed money has flowed into the system than new tangible assets created to back it.

An issue that merits far more attention than it gets is the massive role our government plays in the economy. I contend that in the case of a financial crisis brought on by a large number of defaults it will act as a net under the economy making painful deflation unlikely. This means, in the end, those in power and control of the financial system are more likely to engineer an inflationary exit from this mountain of debt. As stated earlier, paying back debt with something of lower value is another way the system masks a default.