Obama Might Get The Last Laugh. Trump Assumes Mantle as the ‘King of Debt’ 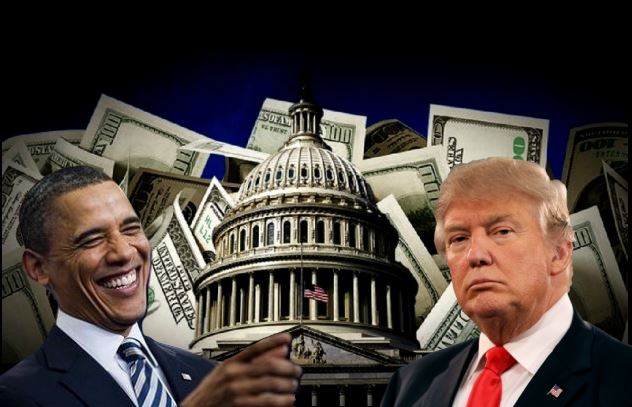 When President Obama nearly doubled the national debt, raising it by almost $9 trillion during his two terms in office, Republicans howled in alarm. Although interest rates were being kept artificially low by the U.S. Federal Reserve and global central banks in the aftermath of the Great Recession, there certainly would be a reckoning down the road when the bill came due.

So incensed were Americans by the profligate borrowing by the federal government that it caused a political revolt in the form of the Tea Party, whose politicians took Congress by storm and demanded accountability for the fiscal irresponsibility in which our country had engaged. Tea Party-affiliated politicians urged congressional Republicans to be willing to shut down the government to force congressional Democrats and President Obama to agree to deep cuts in spending and to repeal the Affordable Care Act.

And, for the first time in decades, Congress refused to pass a continuing resolution (in lieu of a final budget deal) to raise the debt ceiling, which forced a government shutdown in 2013.

One of the central tenets of the Republican Party has been a commitment to fiscal conservatism, which consists of three central prongs: low taxes, low debt and small government. America’s burgeoning national debt, sprawling government bureaucracy and incredible burden of liabilities — that is, promises to pay in the future — seem to belie this set of ethics.

So, when President Trump agreed to lower taxes as part of his economic plan in 2017, most Republicans thought it was a step in the right direction. We believed it was good for the economy and many signs, including our current state of full employment and robust stock market expansion, seem to bear that out. However, lowering taxes affects only one side of the government balance sheet. To be done responsibly, lower taxes must be accompanied by lower spending.

And that is something the president has failed to do. This year, the U.S. national debt at roughly $22 trillion reached 100 percent of our gross domestic product (GDP) for the first time in American history. Despite the fact that our economy generates an incredible $20 trillion annually, we borrow at least that amount in addition to our income to finance our current expenditures. Were America a country without a reserve currency, like Greece, we already would be facing an economic emergency.

We once derided Obama as the “king of debt.” But at this point in his presidency, Trump seems to have happily inherited the mantle.

The economic reasoning behind Trump’s decision to lower taxes without lowering expenditures is a particular form of economic voodoo that reasons that the “fiscal multiplier” caused by putting more money back into people’s pockets will stimulate increased economic investment and, consequently, economic growth. That economic growth will produce increased tax revenue that exceeds the amount of the tax cuts. This looks great in theory — but theory is where it belongs. Economic growth has not outpaced government expenditure over the past two years.

Despite campaigning on a promise to eliminate the national debt, Trump is on track to match or exceed Obama’s debt increases. The only difference — and this is a key one — is that there is no opposing party in Congress that seems to be capable of checking the madness. There is no more Tea Party, and fiscally conservative Republicans are notably silent. Trump not only has proven to be fiscally irresponsible like his predecessor, he also has played a dangerous political game of publicly coercing the Fed to keep interest rates artificially low. The massive fiscal stimulus in which the Fed has engaged over the past decade has kept the U.S. economy afloat. But it has so burdened the Fed’s balance sheet that it has few tools left at its disposal should a real economic crisis occur.

The logic of continuing to goose the economy with debt and monetary stimulus, even after it has reached nominal full employment, is akin to sending the drunkest guy at the bar out into the night with a full bottle of vodka in hand. Something tragic is bound to happen. At least Obama had the excuse that he needed to stimulate an almost moribund economy in the midst of a deep recession. What is Trump’s excuse?

The president has had a long enough track record in business to understand both the healthy and perilous effects of debt. In a healthy, growing organization, debt can be used to invest in capital goods and other investments that can multiply growth. However, in declining and weakening firms, debt often is used to mask poor growth and pay for current expenditures — which causes a vicious cycle that eventually leads to bankruptcy and failure.

In America, we seem to be doing the latter when it comes to our national balance sheet. We are using cheap (for now) long-term debt to cover immediate expenses that should be covered with current revenue. We are not using debt to invest in capital goods — dams, roads, ports and other infrastructure — that can make America more economically competitive. Instead, we are spending on current consumption, in the form of entitlements, health care, military expansion and government bureaucracy.

What happens when the bill comes due? Already there are signs that the new bubble is the “risk-free” asset that is the U.S. dollar. So much global investment has gone into U.S. debt that we are gorged on debt. However, if countries such as China, Saudi Arabia, Japan and Europe decide to reduce their investments, the results could be catastrophic. At debt levels equaling or even exceeding GDP, even a 1 percent rise in debt service on U.S. debt could put extreme pressure on the government’s ability to meet current obligations.

To make our country great again, we need to become more fiscally responsible. We are simply not in a position of strength to engage in tough negotiations on trade and other geopolitical issues when we put ourselves in such a precarious position of owing the world a ton of money.