Not Even Paycheck To Paycheck: 1 In 3 American Workers Runs Out Of Money Before Payday 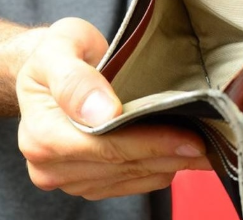 A new study has found that at least 32% of people making over $100,000, run out of money between paychecks and can’t make ends meet in the “greatest economy ever.”

This shows us that there’s a significant gap between Trump’s election-year propaganda and what is happening on the ground.

The study notes that many of these financially stressed-out folks are resorting to payday loans, credit cards, and have been slammed by overdraft fees as their economic well-being quickly deteriorates.

The survey was conducted by Salary Finance, who interviewed 2,700 working adults at companies with over 500 employees.

Amy is one of those Americans who are all too familiar with her household running short on cash as her husband makes about $50,000 per year.

“Tax time hurts for us because we don’t get a refund, we get a bill,” she tells CNBC.

And which respondees are running out of money in between paychecks?

Well, it’s widespread according to the data – at least a third on average across all salary ranges.

Macklin said the cost of living is stressing everyone out and putting a massive hole in wallets. Soaring food, housing, education, and medical expenses are crippling people in Trump’s economy.

No matter how one looks at it, 42% of people in the survey across all salaries were struggling to pay bills as financial stress threatened to leave some in complete ruin.

Macklin warned the findings are “extremely worrying” ahead of the next economic downturn.

We’ve documented countless times that exploding wealth inequality has transformed the middle class into the bottom 90%, as it’s the top 10%, and really the top 1%, that are benefiting off easy money policies. At the same time, everyone else drowns in debt in the “greatest economy ever.”

It won’t be surprising that as the market melts up to new highs, an unprecedented public backlash is building on the frustrations of millions who can’t make ends meet. One way or another, these people in financial misery will express their feelings if it’s at the voting box, or on the streets, as America is destined for social-economic unraveling in the 2020s as the rich soak up all the wealth, leaving very little for everyone else.

The Federal Reserve, whose unprecedented loose monetary policies have led to extreme wealth inequality, has thrown the U.S. into a banana republic…

This will all work itself out somehow in the future if it’s through voting or protests on the streets. Things will get interesting during the next recession, which as of today, the Covid-19 outbreak in China could be enough to tilt the world into a period of below-trend growth in the quarters ahead.