Nine States Headed For Recession In Six-Months, Most Since Financial Crisis 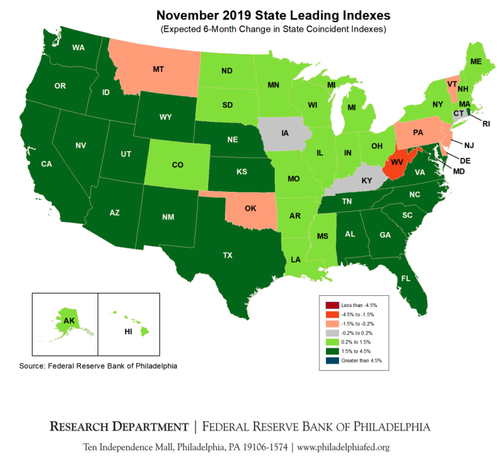 President Trump’s core campaign promise was to “Make America Great Again,” through a revival of the manufacturing complex via launching a trade war against China and debt-fueled tax cuts for corporations.

Most of the recovery, well, it was a sugar high, that by the time late 2018 rolled around, economic growth rates started to reverse.

Manufacturing data on Friday was more confirmation that an industrial recession continues to persist and could be broadening into early 2020. Now the slowdown appears to be spreading to nine states that are teetering on the edge of a recession.

The Federal Reserve Bank of Philadelphia published new leading index data for 50 states for November 2019 last week. The leading indexes are a six-month forecast of the coincident state indexes that show nine US states are expected to plunge into a recession within six-months – this is the most significant number of states to slide into a contraction since the financial crisis.

State leading indexes for November show that West Virginia’s economy is headed for a significant downturn. The coal industry is in tatters, manufacturing is busting, and an opioid crisis continues to ravage local communities across the state.

Delaware, Vermont, Oklahoma, Montana, Iowa, Kentucky, and Connecticut are other states where leading indexes are indicating an economic contraction could occur in the next six months.

Leading indicators suggest Midwest and Rust Belt states will record marginal growth in the next six months, but we should note that growth rates have quickly faded in these states where farming and manufacturing have gone bust.

Bloomberg data shows nine states are headed for an economic contraction; this is the highest amount since July 2009.

An industrial recession is broad-based at the moment, spreading to nine states, with the risk of infecting another 14 states in the Midwest and Rust Belt by 2021.