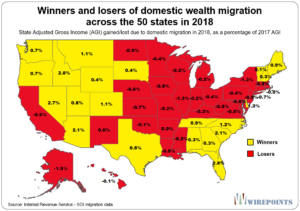 Nearly 7.5 million people moved from one state to another in 2018, boosting the economies of some states while straining the finances of others.

The winners of the battle for people and their incomes included states like South Carolina, Arizona, Texas and Florida. Those findings are based on a Wirepoints’ analysis of the latest 2018 domestic migration data provided by the Internal Revenue Service.

The stakes are large. A growing population for the winners means an increasing tax base, economic growth and investment. And as baby boomers age and pressure to fund pensions increases, a growing workforce is a windfall.

On the other end of the competition are states that have become perennial losers. Connecticut, New Jersey, Illinois and New York have experienced some of the nation’s biggest drain of people and their money.

According to the latest numbers, Florida is once again the biggest winner of both people and money.

The Sunshine State attracted nearly $32 billion in Adjusted Gross Income (AGI) from people moving into the state in 2018. In contrast, it lost about $15.7 billion in AGI from those who left Florida, leaving the state with a net gain of nearly $16 billion in new taxable income.

Arizona was the runner up with a net gain of $3.5 billion, followed by Texas with $3.4 billion. North and South Carolina rounded out the top five with gains of $3 billion and $2.5 billion, respectively.

On the losing side, New York suffered the worst outflow of money of any state in 2018. The Empire State lost a net $9.6 billion in income, or more than 1.3 percent of its AGI base.

California was next, losing a net $8 billion, followed by Illinois and a loss of $5.6 billion. New Jersey and Maryland were in 4th and 5th place, with $3.2 and $1.7 billion in losses, respectively.

A full table with each state’s ranking is provided below…

Keep an eye on Illinois

Illinois’ experience with out-migration shows just how damaging being an “exit” state can be. The state’s $5.6 billion AGI loss in 2018 wasn’t just a one-time thing. Wirepoints’ analysis found Illinois has netted annual AGI losses every single year since at least 2000.

The losses have piled on top of each other, year after year, and if you add them all up, Illinois’ AGI losses total $410 billion over the 2000-2018 period. That shrinking tax base has contributed to the state’s deepening fiscal woes. Illinois now has more than $6 billion in unpaid bills, the nation’s largest pension shortfall and is rated just one notch above junk.

Considering the annual losses to Illinois’ tax base, Gov. J.B. Pritzker’s wish to replace the state’s constitutionally protected flat tax with a progressive tax structure that will increase total taxes by over $3 billion is all the more striking. Illinoisans will vote for or against the progressive tax on a ballot initiative in November 2020.

The state has lost a net of more than 1.5 million people to out-migration since 2000, or more than 11 percent of the state’s population.

Florida’s gains and Illinois’ losses are a clear reminder that states are constantly competing for people, businesses and a growing tax base.

The prize for winning is big, but the price for losing may be even bigger.

Authored by Ted Dabrowski and John Klingner via Wirepoints.org,