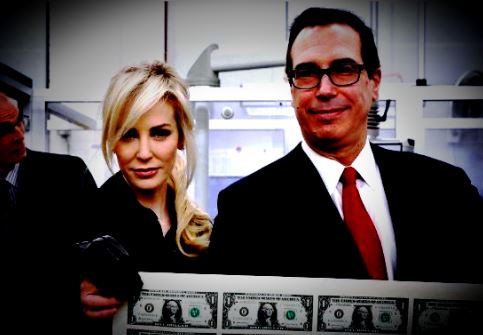 An eye-opening new study into financial literacy reveals just how little Americans know about the US dollar – or how the monetary system works at all.

The study, sponsored by cryptocurrency firm Genesis Mining, aimed to uncover just how well the average American comprehends basic financial details about the banking system, Federal Reserve, and the dollars in his or her wallet.

Unfortunately for the reputation of the US educational system, the results weren’t all that favorable.

Stunningly, the study found that 29% of Americans falsely believe the US dollar is backed by gold. That hasn’t been true for decades, but at least it makes more sense than those who said that bonds (5%) or oil (4%) were backing the greenback. A further 7% responded “nothing,” while 23% admitted that they didn’t know, leaving a mere 30% of respondents stating the correct answer: the US government.

Since Richard Nixon officially scrapped the gold standard in 1971, the US dollar has been backed by “the full faith and credit” of the US Government, something which many believe to be an insufficient support. (They’d likely argue that the 7% who answered “nothing,” were, in fact, correct.)

But this wasn’t the only worrying revelation. The study also asked whether banks must maintain 100% of customer deposits in reserve. Incredibly, just under half of the respondents either answered “yes” or “I don’t know.” The remaining 52% correctly responded, “no.”

Speaking to CCN, Marco Streng, CEO of Genesis Group, reasoned that Americans are blissfully ignorant about their financial system, a luxury not available to residents of more volatile economies like Argentina.

“I believe it’s because for most Americans, overall the US dollar works fine in their day to day lives. Unlike countries such as Argentina or Venezuela, Americans don’t have to really be worried about dramatic value fluctuations or strict capital controls. They are too busy living their lives to really take the time to think deeply about what money is, what it means, and how it will evolve in the future.”

The study didn’t just seek to prove how little Americans know about their money. It also wanted to know about how they use their money, and whether they’d be open to digital alternatives like cryptocurrency.

Two-thirds of respondents prefer to make payments with debit or credit cards, while 31% answered in favor of cash.

Despite most respondents admitting to not using cash and preferring the use of debit/credit cards, the study found that Americans don’t want to eliminate cash entirely in favor of cryptocurrency or another digital money system. When asked about that proposal, a meager 13% said yes, a further 10% didn’t know, and a massive 76% answered rejected it.

Streng suggested that this reluctance springs from the lack of incentive for a more dependable system:

“If you are a migrant worker sending money home to your family or run an international business and have to deal with the slow and expensive wire transfers, the concept and benefits of digital currency can make sense to you. But if you take, for example, a 20 year old college student, many of those benefits mean nothing to them.”

However, he added that doubt in cryptocurrencies stems solely from skepticism about new technology:

“it will take time for people to become comfortable with it, just like it took people time to be comfortable paying with a credit card online.”

Streng believes that it’s not only time that will change the minds of the average American but also proper education. However, he stressed that this instruction must be relevant to individual needs.

“The average person doesn’t care about blockchain or any technology for that matter. They don’t care if something is decentralized. They care that their bank is closed on the weekend. They care that they are in a bind because they hit their daily ATM withdrawal limit. […] The community as a whole needs to focus on selling these types of benefits, not the features and technology that makes cryptocurrency possible because at the end of the day, for most people, they just don’t care.”

While the study’s findings highlight a worrying glimpse into the understanding of the monetary system, they also present a clear mandate for appropriate education on the subject. Perhaps the best way for American bitcoin fanatics to introduce their loved ones to cryptocurrency is to teach them about the US dollar first.

This article was edited by Josiah Wilmoth here…