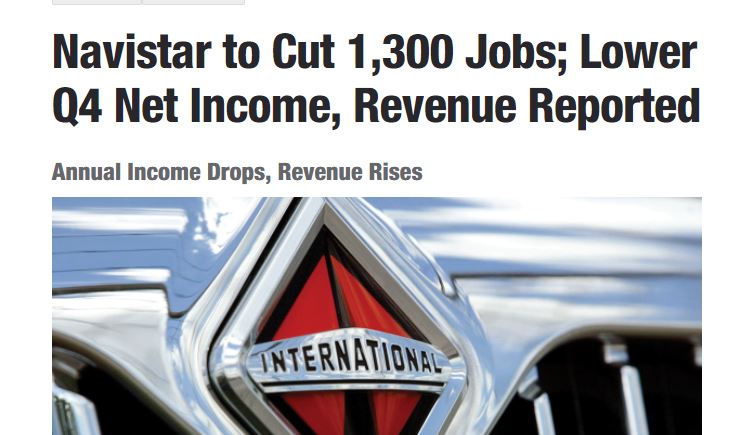 Navistar International Corp. reported lower net income and revenue in its fiscal year fourth quarter as the industry’s falling demand for heavy-duty trucks was amplified by other corporate factors, including strong year-earlier chargeouts. For the full year, net income fell and revenue rose.

Navistar also will reduce global employment by more than 10%, the maker of International brand trucks said Dec. 17. The Lisle, Ill.-based manufacturer slashed its forecast for 2020 revenue to below the lowest estimate among analysts surveyed by Bloomberg, sending shares plunging more than 10%, the biggest drop since October 2018.

Most of the more than 1,300 jobs being eliminated will come from North American production cuts, according to a spokeswoman.

“We are taking actions to adjust our business to current market conditions, including reducing production rates and selling, general and administrative expenses while restructuring our global and export operations. Building on the strong gains achieved over the last several years, Navistar has a clear road map in place for sustained growth that will set it apart from the industry,” Troy Clarke, Navistar chairman, president and CEO, said in a release.

He added that for the second year, Navistar’s warranty expense “achieved industry-best levels representing 1.4% of revenue in 2019. As for uptime, we made significant improvements in reducing repair frequency and repair duration.”

The revenue drop largely was driven by a strong fourth quarter in 2018, vehicle chargeouts after supplier production constraints in the third quarter of that year, the impact of the sale of Navistar Defense in December 2018 and lower industry demand in the quarter, according to the company.

Navistar defines chargeouts as trucks that have been invoiced to customers, with units held in dealer inventory primarily representing the difference between retail deliveries and chargeouts.

For the quarter, its truck segment saw profits slide to $86 million compared with $197 million a year earlier. The year-over-year falloff primarily was due to an 18% decline in the company’s core chargeouts, as well as the impact of the sale of a majority interest in Navistar’s defense business.

The parts segment was its bright spot.

In the quarter, the global operations segment recorded a loss of $10 million, compared with a year-ago, fourth-quarter profit of $4 million. The year-over-year change largely was driven by a $14 million restructuring charge related to cost reduction actions, including ceasing production at the company’s MWM Argentina engine plant and restructuring activities in Brazil.

“We expect 2020 GDP to be near 2%, lower than 2019. At 2% GDP growth, freight demand and shipping capacity are pretty balanced, reducing the need to expand fleets. We think the industry will be driven by replacement demand,” Clarke said during an earnings call.

In November, as the holding company’s new fiscal year began, its truck-making arm, Navistar Inc., issued a safety recall for 12,539 International brand medium-duty work trucks that can be used for deliveries, dumping and towing, and that are at risk of unintended movement when the parking brake is in use.