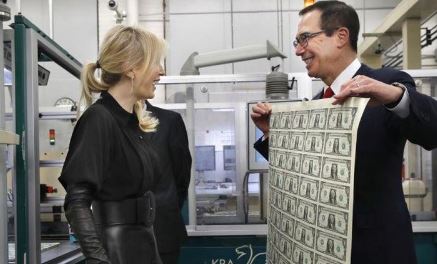 The last time the US was seriously considering issuing ultra-long dated bonds – those with a maturity of 50 and 100 years – was back in late 2016 and early 2017, when yields were near the record lows hit in recent days.

As we reported back in November 2016, shortly after Steven Mnuchin was confirmed as US Treasury Secretary, the former Goldman banker proceeded to roil the bond market when he told CNBC he would look at extending the maturity of future Treasury issuance, hinting at 50 and 100 Year bonds, which promptly sent long-term US bond yields surging by the most since the turmoil following Trump’s election victory.

“I think interest rates are going to stay relatively low for the next couple of years.” Mnuchin told CNBC. “We’ll look at potentially extending the maturity of the debt, because eventually we are going to have higher interest rates, and that’s something that this country is going to need to deal with.” Ironically, with that statement, Mnuchin quickly sent yields spiking higher, although courtesy of foreign buyers these were promptly renormalized.

Asked if he would consider maturities of 50 or even 100 years, ultra-long issuance that has become increasingly popular in Europe in recent years as interest rates plunged to record lows as recently as July, Mnuchin said: “We’ll take a look at everything.”

Well, it’s that time again. As a reminder, two weeks ago, the Treasury’s Office of Debt Management announced it was again conducting a broad outreach to Wall Street to refresh its understanding of market appetite for a potential Treasury ultra-long bond, according to a statement Friday. Specifically, the US Treasury is once again looking at the market interest in 50- or 100-year bonds, although it has not yet reached any decision whether to issue such a product.

As noted above, the Treasury last conducted a similar outreach on this product in early 2017, and was seeking to update its “market intelligence” at a time when the Austrian 100Y bond is trading above 200 cents of par in what has emerged as unprecedented demand for ultra duration. The Treasury also said that this is part of an “ongoing and periodic review of potential products.”

As a further reminder, back in the May 2017 refunding announcement, the Treasury disclosed that it is studying the possibility of ultra-long bonds, with maturities greater than 30 years, although it eventually panned the idea due to no “strong or sustainable demand.”

This time may be different, however, because moments ago, with the 30Y Treasury yield dropping this morning as low as 1.907%, a new record low, Treasury Secretary Steven Mnuchin told Bloomberg in an interview that issuing ultra-long U.S. bonds is “under very serious consideration” in the Trump administration, which as Bloomberg notes could lead to a “historic revamp of the $16 trillion Treasuries market.”

“If the conditions are right, then I would anticipate we’ll take advantage of long-term borrowing and execute on that,” Mnuchin said Wednesday in a Bloomberg News interview in Washington. He said officials held a meeting earlier in the day to review the possibility.

Naturally, the issuance of bonds with an ultra long maturity would be a welcome option to an administration which is faced with a soaring budget deficit that’s headed to $1 trillion annually and quickly needs to find a cheap way to plug the debt hole, one which does not have to be address for decades. Meanwhile, pension funds – desperately starved for yield and positive returns – would enjoy a few extra points of returns amid falling yields.

Mnuchin said his renewed interest in long bonds was unrelated to the drop in yields on shorter-term U.S. debt, even as the yield on 30-year Treasuries plunged to a new record 1.90% on Wednesday.

Not surprisingly, the Bloomberg report sent yields on longer-dated Treasurys sharply higher, with the 30Y yield spiking by 4 bps…

That said, the Treasury is far away from a determination on new 50 and 100Y paper:

“It would be premature for me to comment on what our conclusion is,” Mnuchin said, adding that the department is “actively revisiting it, and it is something that is under very serious consideration.”

And while the Treasury and Treasury Borrowing Advisory Committee shelved the idea when it last emerged for serious consideration in 2017, this time record-low interest rates and escalating demand for safe US paper may make this an opportune time for the Treasury to issue ultra-long debt, with Bloomberg noting that “some observers see a window for the U.S. to issue extremely long-term debt instruments, even though the idea has been met with a cool reception on Wall Street.”

As we first reported two weeks ago, whereas Mnuchin studied the issue when he first took office in 2017, the idea was put to rest following a thorough review with the TBAC, which concluded that “strong or sustainable demand” may be fickle for the paper. Specifically, while buyers may be enthusiastic when yields are high, in downturns, when the Federal Reserve is cutting rates, demand could well evaporate, pushing government borrowing costs higher across different maturities. Just last week, Germany suffered a technically failed 30 Year auction which for the first time priced at a negative yield – as demand was insufficient to fill out the €2BN offering size, the Bundesbank was forced to retain more than half of the total issue.

“The determination we made at the time was that there was definitely some interest in it but it was not necessarily at the size and scale that we thought made sense to pursue,” Mnuchin told Bloomberg on Wednesday. “Some time went by and I thought it made sense that we revisit this.”

Another reason why the Treasury may want to issue ultra-long term debt is that the US economy is headed for a recession, when appetite for duration soars. And a recession now appears inevitable after the 2s10s curved inverted earlier this month for the first time since the financial crisis. Such an inversion is seen as a virtually certain harbinger of an an economic recession in the next 18 months.

The move caught President Donald Trump’s attention, who on Aug. 14 tweeted about the “CRAZY INVERTED YIELD CURVE!” and blamed the Fed for any negative effects.

The Treasury secretary however poured cold water of the inverted yield curve’s predictive powers, telling Bloomberg that “there are people who think that the yield curve can predict a recession — I don’t believe that. The answer is: In environments when the market thinks that the Fed is going to lower short-term rates, and that’s built into the market expectation, people end up buying longer-term securities, and that’s what can lead to a flat or inverted yield curve. The market adjusts quicker than the Fed.”

What Mnuchin purposefully failed to say is that the market thinks the Fed is going to lower short-term rates precisely because it is convinced that the economy is headed for a recession, just as it was – correctly – during the past 7 inversions.

Finally, for those curious what the TBAC thought of ultra-long dated bond issuance back in May 2017, below we excerpt from our post “TBAC Slams Ultra-Long Treasury Idea, Sees No “Strong Or Sustainable” Demand; Yields Slide“

For those curious what the TBAC thought of ultra-long dated bond issuance back in May 2017, below we excerpt from our post “TBAC Slams Ultra-Long Treasury Idea, Sees No “Strong Or Sustainable” Demand; Yields Slide“

With Bloomberg recently writing articles such as “Mnuchin to Wall Street: U.S. Is Serious About Ultra-Long Bonds“, “Mnuchin Says Ultra-Long U.S. Bonds Can Absolutely Make Sense” and “Wall Street Sees Treasury Paying Up for Ultra-Long Bond Issuance“, there was a tangible buildup of confusion and excitement that the US Treasury under Steven Mnuchin may follow in Europe’s footsteps and announced 50, if not 100 year Treasurys in the near future. As such, today’s quarterly refunding announcement by the Treasury Borrowing Advisory Committee – which met yesterday at the Hay Adams Hotel at 9:00 a.m. – was keenly watched to see whether Wall Street would agree or endorse the Mnuchin trial balloon.

In fact, in the minutes released as part of the May 2 meeting, the TBAC was vocally against launching “Ultra-longs” at this moment saying “while an ultra-long is most likely to be demanded by those with longer-dated liabilities, the Committee does not see evidence of strong or sustainable demand for maturities beyond 30-years.”

The TBAC highlights the change in US TSY issuance patterns over the past three and a half decades, and notes that since 1980, the Treasury has made minimal changes to its issuance patterns: Introduced 2 new products (TIPS and FRNs); Permanently canceled 2 products (4y and 20y); Canceled and subsequently re-introduced 3 products (3y, 7y and 30y).

The TBAC further “recommended that further work be done to study these demand dynamics to get a better sense of where an ultra-long bond might price, which could be above or below the longest maturity debt issuance based on the pricing of domestic ultra-long derivatives, ultra-long bonds abroad, and theoretical models.”

Instead of rushing to issuing 50 and 100-year paper, the TBAC suggested that “regular and predictable issuance policy should remain the central consideration to minimize Treasury’s funding cost over time.” It also suggested other ways that Treasury might tap potential demand from long-duration investors. As such it recommended that “Treasury consider issuing a zero coupon 50-year bond, and coupon maturities between 10- and 30-years, preferably the reintroduction of the 20-year.”

Furthermore, the TBAC noted that it does not expect “meaningful ultra-long supply”

And while the TBAC was pessimistic about demand for 50 Year paper, it explicitly recommended against issuing a 100-year bond due to “limited pension or insurance cash flows beyond 50-years and the preferable attributes of stripped 30-year bonds to meet a similar duration as a 100-year coupon bond.”

Here is the full breakdown of TBAC recommendations on ultra-long dated paper: