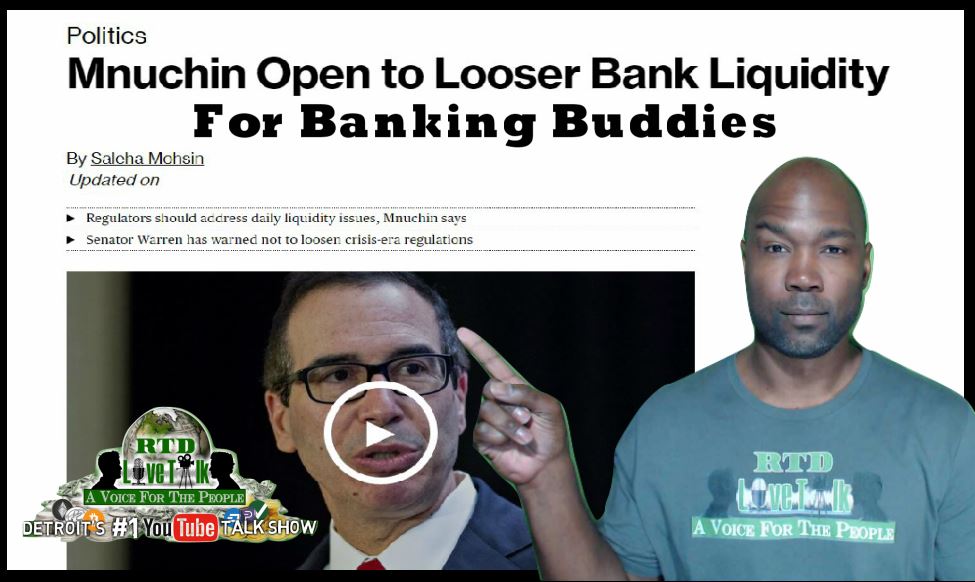 Mnuchin said in an interview Tuesday that he had spoken to Jamie Dimon, chief executive of JPMorgan Chase & Co., and other banks about how to avoid liquidity problems.

“The banks have raised an issue around intra-day liquidity, and that is something that makes sense for regulators to look at,” Mnuchin said in Tel Aviv, his first stop during an 11-day trip through the Middle East and India.

There may be a way around current regulations that creates more intra-day liquidity without raising risks, according to Mnuchin.

Turmoil last month that led the Federal Reserve to inject liquidity for the first time in a decade is largely a result of the “technical issue” of a corporate tax deadline draining money from the banking system, Mnuchin said, expressing a widely held view. The dysfunction has kept the U.S. central bank pumping money to quell a surge in short-term rates that was pushing up its policy benchmark rate. The operations also eased the pain of hedge funds and broker-dealers that need to finance their Treasury holdings.

Repo glitches have cast a spotlight on how thoroughly the environment for short-term funding has changed since the 2008 credit crisis, according to bank executives, traders and observers of the market. They said that’s even created a generational gap: Big banks and regulators have seen so little repo-market turmoil in recent years that they have lost some of their reflexes.

Mnuchin said he believes the Fed has resolved the technical issues that caused the glitch and he doesn’t expect them to happen again, adding that any issues with regulations are separate.

But banks say a strict liquidity requirement instituted after the financial crisis is also a contributing factor.

Too Big to Fail

Regulations introduced after 2008 oblige financial institutions to hold more cash and cash-like assets as a buffer against times of stress. Systemically important banks — JPMorgan is the largest in the U.S. — face year-end reviews to determine how much more common equity they must carry.

Dimon has said his firm had the cash and willingness to calm repo markets when they went haywire in September, but regulations held it back.

Instead, the Fed began daily liquidity injections, as market forces alone weren’t able to calm the ructions. Even as repo rates have since returned to more normal levels, the Fed has also resumed purchases of Treasuries to bolster bank reserves.

JPMorgan is building its case, with analysts warning that money-market stress is likely to get much worse despite the Fed’s attempts to fix the problem. Conviction is also lacking that the central bank has resolved the issues in the funding markets.

“It’s a reasonable question: Have we gone too far in the other direction in requiring the banks to maintain this excess liquidity for intra-day operations?” Mnuchin said.

However, banks are unwilling to go negative with their accounts at the Fed, citing regulatory burdens.

President Donald Trump has repeatedly vowed to loosen the leash on Wall Street, but some of regulators’ most meaningful efforts to revamp post-crisis constraints on big banks have run into problems.

Any further effort to loosen the rules is also likely to face push-back. Senator Elizabeth Warren, a Democratic presidential candidate, already waded into the debate around last month’s repo turmoil, warning Mnuchin not to use the episode as a rationale for weakening post-crisis regulations.

Mnuchin’s proposal “is dangerous and it’s the exact same direction that every single step taken by the Trump administration has gone, and that is make it a little easier for the banks to make a little more money with a little less oversight,” Warren told reporters in Laconia, New Hampshire Tuesday