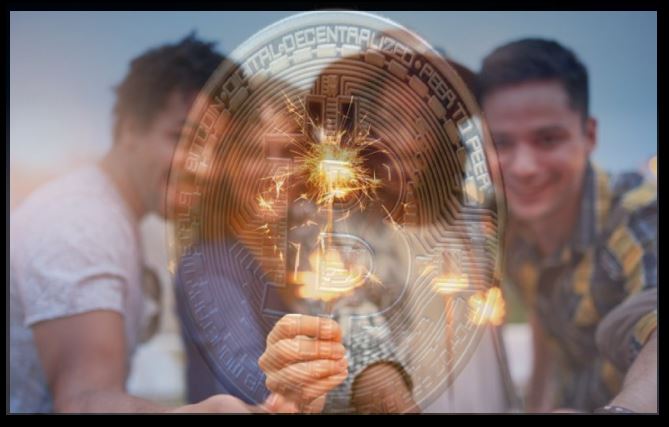 “Drop Gold” – the ever-present tagline of Grayscale’s Bitcoin Trust TV commercial – appears to be working its magic on a certain cohort of society.

2019 has seen assets under management in GBTC soar…

And for Millennials, according to the latest data from Charles Schwab, the Grayscale Bitcoin Trusts is the 5th largest holding in retirement accounts (including 401(k)s) with almost 2% of their assets tied to the success (or failure) of the largest cryptocurrency.

For now this remains a relatively small number…

But, given the increasing acceptance of socialist policies, and the historically-ignorant promise of MMT (and don’t forget UBI), Goldman Sachs suggests that Millennials’ willingness to accept ever-increasing central-planning means gold is the go-to asset to preserve wealth over long-term horizons.

And, at least in the short-term, gold has held its value (relative to Bitcoin) as the world’s volume of negative-yielding assets has shrunk on the latest round of optimism that ‘this time is different’…

Indeed, Goldman notes that gold looks attractive particularly relative to DM bonds. Both bonds and gold are defensive assets which go up in value when fear spikes. Exhibit 5 shows that investment and central bank demand for gold has been highly correlated with US 10 year real rates.

During the next recession gold may offer better diversification value to bonds because the latter may be capped by the lower bound in rates limiting their ability to appreciate materially. This is particularly relevant for Europe where rates are already close to the lower bound. This means that during the next recession when fear spikes, gold may decouple from rates and outperform them.

If we look at week on week changes in gold they tend to be dominated by the dollar. As a result the gold S&P500 weekly changes correlation looks almost identical to correlation of S&P 500 and the dollar (see Exhibit 7).

However, if we look at 5 year returns gold and S&P 500 display strong inverse relationship with gold performing great during the 1970ies and 2000s when the S&P 500 underperformed (see Exhibit 8).

This makes sense given that gold is ultimately a hedge against systematic macro risks, which can lead to long periods of equity underperformance. Our strategy team also finds that gold historically has been a good hedge against periods of large drawdowns of the 60/40 portfolio. This was particularly true when a drawdown is caused by accelerating inflation as it was in the 1970ies. Therefore, if one is concerned that the low macro volatility of 2010s will be followed by higher volatility in the 2020s, which would hurt equities, gold would be a good addition to the portfolio.

Geopolitical uncertainty is already translating into greater gold demand. CBs globally have been buying gold at a very strong pace, albeit more recently the rate of CB purchases has cooled off as China and Russia have moderated their buying. Nevertheless, 2019 still looks to be a record year for CB gold purchases with our target of 750 tonnes combined purchases likely to be met (see Exhibit 15).

Rising political risk – together with negative European rates – may be an important reason behind the large share of unaccounted gold investment over the past several years.

Exhibit 17 shows cumulative unexplained gold demand based on World Gold Council (post 2010) and GFMS (pre 2010) balances data. It surged since 2016. Similar dynamics can be seen when we look at implied vaulted gold stocks built in the UK and Switzerland, which is calculated as implied cumulative total net imports minus transparent ETF gold stocks. In fact, since the end of 2016 the implied build in non-transparent gold investment has been much larger than the build in visible gold ETFs. This is consistent with reports that vault demand globally is surging.

Political risks, in our view, help explain this because if an individual is trying to minimize the risks of sanctions or wealth taxes, then buying physical gold bars and storing them in a vault, where it is more difficult for governments to reach them, makes sense. Finally, this build can also reflect hedges by global high net worth individuals against tail economic and political risk scenarios in which they do not want to have any financial entity intermediating their gold positions due to the counterparty credit risk involved.

Finally, Modern Monetary Theory (MMT) – which advocates for central bank financed fiscal deficits – has been gaining more airtime recently, with former Fed Chair Ben Bernanke and former Fed Vice Chair Stanley Fischer offering similar proposals. The logic is that persistent low inflation and lack of borrowing capacity in many developed markets means that direct CB financing of government deficit is warranted. This is especially true for countries where monetary policy is close to the limits of its capacity. Whilst there are arguments to be made in favor of MMT there are also risks associated with it. Notably some economists stress that if not used responsibly it could lead to a material acceleration in inflation.

In the next recession, our US economists do not expect governments to adopt direct monetary financing and expect inflation to remain firmly anchored. But this doesn’t necessarily prevent an increase in debasement concerns if conversations around MMT become more widespread — a potential boost to demand for gold as a debasement hedge. False debasement concerns have led to gold rallies in the past. Post 2008 aggressive QE in the US led to a considerable push into inflation protected assets including gold (see Exhibit 19). These inflationary concerns did not materialise and the allocation to gold and inflation protected bonds fell sharply in 2013. Another period, currently is less talked about, is the Great Depression when the Fed pumped a lot of money into the economy leading to debasement concerns (see Exhibit 20). What followed was actually disinflation and the gold price eventually moderated.

This is based on a deteriorated attractiveness of long term DM bonds as portfolio diversifiers and real return generation instruments, exposure to growing EM wealth, limited mine supply growth, elevated political risks and a potential increase in debasement concerns sparked by rising airtime of Modern Monetary Theory.

So – will Millennials keep saying “bye gold” or come over the ‘dark side’ and “buy gold”?