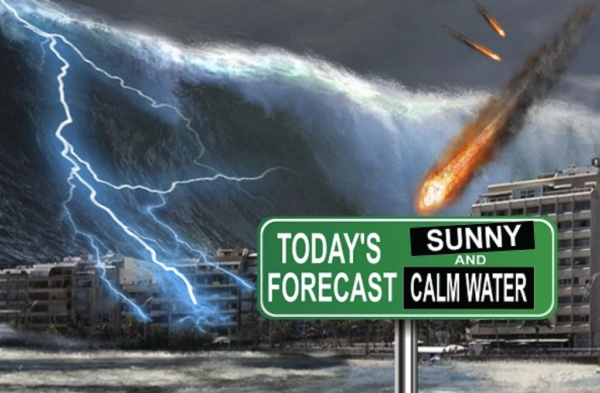 SD Friday Wrap: Winter is coming? Well now, winter will be the least of our worries because of what just happened, this very week…

Do you watch Silver Doctors Live (link to our YouTube playlist)?

We don’t have any scripts, and we certainly don’t use teleprompters.

Sure, we have a few different topics that we propose for discussion during the shows, but other than that, our show is unedited, raw, and often times our discussion takes an interesting turn by interacting with people in the live chat and when viewers call-in live to the show!

You see, I think price inflation is about to become a huge problem for the entire globe.

In part because we see the rich bidding-up record prices for live crabs, vintage bottles of whisky, and bananas duct-taped to walls, and those are just some of the extreme examples I’ve recently highlighted in my “Hyperinflation Watch” series.

Now, however, we’re no longer talking about extreme examples, for two things that are very real are about to become very real problems.

In today’s live-stream, we discussed a report that says 25% pigs have died off, globally!

Let that sink in for a moment: People around the world have to compete for 25% less pork available for purchase.

This is one serious recipe for food price inflation!

Pun and no pun intended.

As for the former mixed with the latter, pork price inflation is not the only ingredient in this recipe.

Combine the pig die-off with this year’s spring & summer historic flooding in the mid-West.

And finally, sprinkle in a couple of Autumn arctic blasts at harvest time.

Oh yeah, and feel free to mix-in other ingredients to taste!

OK, “Hey Half Dollar, you’re on one of your goofy works of semi-passable grade-school art today, so could you just get to your point already?”!

Here’s my point: Food price inflation, in my opinion, is about to become a very serious matter around the globe, and it might get so bad that if we’re talking about 25% of the world’s pigs dying-off or needing to be euthanized and disposed-of now, in 2019, we may be talking about a global famine next year, in 2020.

That’s right, because the US military is beginning a strategic stockpile of rare earths, and today we discussed neodymium specifically, but my point is that this only adds to the inflationary fire.

In other words, all things considered, we’re about to have massive food price inflation specifically, and massive commodities inflation in general.

A lot of otherwise smart people still think we’re about to experience major deflation or dis-inflation, and they’re going to be blindsided by this inflation.

And what’s the problem with that?

The problem is that it simply means the crack-up boom is nearly upon us.

That is to say, the mad scramble to get rid of rapidly devaluing fiat currency in exchange for anything and everything real.

Meanwhile, however, the gold-to-silver ratio is still in the upper-80’s:

The last opportunities to exchange one ounce of gold for over 80 ounces of silver are upon us!

At today’s ratio, stackers and other smart people participating in the gold-to-silver ratio arbitrage can still score a free ounce of gold when the ratio hits 40, or, quite possibly, even more than one free ounce of gold depending on how low the ratio falls at the end of the cycle, but hey, like the Beastie Boys once rapped, “it’s like Lotto, you gotta be in-it to win-it”.

It’s not like Lotto at all, so let’s not get it twisted.

It’s more like a no-brainer, provided that one is willing and able.

For I think the ratio is going much, much lower than 40 at the end of this cycle.

In fact, I think the ratio is ultimately going to parity, and I would encourage readers to call-in to our live-stream next week to make a comment about this, or to ask a question.

There’s no question the cartel doesn’t want silver sitting above its 50-day moving average to open next week:

However, I’m expecting a price break-out next week, and I would be honored if I could make yet another shameless plug to say that we also discussed why silver is likely to break-out.

Gold sure has been pinned down, all week long:

It’s hard to see it on the chart, but at the time I took the screen-shot, gold was sitting above its 50-day moving average.

Palladium is finally taking that trip down to its 50-day moving average:

While a drop like that may seem scary, I’m expecting palladium to perform similarly to how it has performed over the last year.

That is to say, notice how quickly the technicals are moving from “extremely oversold” to a level that’s more supportive of palladium?

I think we get a pullback here, and then we consolidate over time, but I don’t think the consolidation will be over that long of a time, especially if gold & silver finally begin to move next week.

If gold & silver are going to rally next week, I’d be looking for platinum to be above $1,000 very, very soon, if not next week:

Just as everybody gets scared into thinking here comes the next big leg-down!

Crude oil broke-out above $60 this week, and stayed there:

I’m really not sure how the bears out there think the price for a barrel of crude will fall into the $40s, especially now that we’ve carved-out such an impressive bottom.

Copper is ready to break-out to the upside after an ugly consolidation around $2.80:

The House votes to impeach President Trump, and, well, check out the stock market’s all-time record highs, along with today’s gap-up:

Because why wouldn’t investors rush-in to buy US stocks amidst so much political uncertainty in Washington?

Seems legit, does it not?

OK, “Hey Half Dollar, you don’t get it man, the stock market gapped-up and soared to all-time record highs because of today’s witching!”.

Sure it did, because, you know, we have nothing but free markets with real price discovery.

There’s not a care in the world, or a fear in the stock market right now:

Do you even impeach bro?

The markets don’t seem to think so.

Death is coming to the US dollar index’s daily chart:

When the death of the dollar comes to Main Street, we’ll be talking not about death on the charts but death in the streets.

They get-off on this kind of disgusting, evil crap!

Big increases in the US budget deficit and the national debt require big decreases in interest rates.

What’s the bottom line as we find ourselves here this beautiful Friday in late December?

People are distracted by the impeachment circus side show and the 2020 election.

Meanwhile, there is a mega-tsunami of inflation that’s fast moving ashore.

Most people will drown in the rising prices for food and commodities.

Which in turn affects the prices of everything else one buys.

The Fed and Trump do say, “there’s no inflation”.

But inflation is about to destroy the globe.

And it will happen very, very soon.

Gold, silver and some skills.

That’s what is needed.

As are other preps.