Market Melts Up As Fed Turns On The Liquidity Firehose 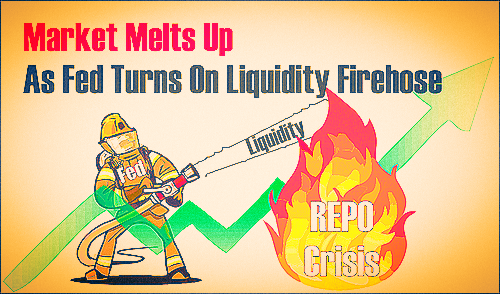 “We are so overbought, and this is feeling like a panicky-just-get-me-in buy day. Be careful about being impressed.” – Kevin Muir

Let me start this week, taking the lead from my dear friend Victor Adair of Polar Futures Group:

“The S&P 500 keep printing new ‘all-time highs’ while complacency reigns even as the CNN Fear & Greed index is flashing extreme greed. Volatility is ultra-low across all markets, the put/call ratio is at a 5 year low and credit spreads are tight. People are reaching for yield, and have no interest in buying downside protection. AAPL is up 100% in 12 months, but TSLA has more than doubled in just 6-months…a poster child for the market’s current exuberance!”

As we discussed previously, the market has been primarily lifted by the largest companies in the S&P 500. In our interview with Thomas Thorton of Hedge Fund Telemetry it was noted that Apple and Microsoft have made up 38% of the YTD rally in the market. Another 38% was supported by the next 15-largest stocks with the remainder brought up by the other 483 stocks in the index.

As I noted in our MacroView Outlook for 2020, and as Victor notes above, the levels of outright complacency and bullishness have reached extremes. The following is our composite “Fear/Greed” gauge with is based on actual market positioning between individuals and professional investors. Since this is a 4-week moving average, it moves more slowly, but with short-term readings spiking higher, I would expect this gauge to be well entrenched at the “Greed” level by year-end.

As Victor notes, this is quite a swing from where we were just one year ago as the markets were in the midst of a near 20% decline.

“A year ago today the CNN index was flashing extreme fear…the S+P index was at 18-month lows…having fallen nearly 20% in less than 3 months…but just a couple of days later it began to rally and is now up ~37% from those lows.”

While the media continually droned on about the “Trade War,” the primary reason for the reversal in the markets was the massive reversal in monetary policy.

As Stanley Druckenmiller said this week:

“You have very low unemployment. You have fiscal stimulus in Japan. You have fiscal stimulus and a lot of confidence coming to Britain. We are running a trillion-dollar deficit at full employment. Apparently, we are going to have some sort of green stimulus in Europe. And we have negative real rates everywhere, and negative absolute rates in a lot of places. So with that kind of unprecedented monetary stimulus relative to the circumstances, it’s hard to have anything other than a constructive view on the markets, risk, and the economy in the intermediate-term.”

However, this stimulus is the largest ever outside of a “recession” or “financial crisis,” which should lead to the obvious question of “what exactly is going on we don’t know about?”

Over the last 3-months the Fed has been fighting a “repo inferno” flooding the overnight lending market with billions in short-term funding. While the Federal Reserve accurately states this is NOT “Quantitative Easing,” market participants didn’t get the memo. The market has risen in every single week the Fed has been active, despite collapsing fundamentals.

As we have noted over the past year, we have remained primarily allocated toward equity exposure, but have also worked around the edges hedging risk, raising stop levels, and remaining primarily domestic-focused. Given our outlook for a steeper yield curve earlier this year, we also shorted duration in our bond allocations, increased credit quality, and carried a slightly higher than normal level of cash.

Currently, that remains the case with the exception that we have now started to make a small shift into value as the momentum trade is now exceptionally extended. The chart below shows the relative performance of momentum versus value which is currently at a level last seen in 2000.

With the markets extremely deviated from long-term trends, extremely complacent, and overly bullish (as noted above), the shift towards value adds a defensive component to our portfolio risk management strategy (more on this in our MacroView)

While none of this means the next “bear market” is lurking, it does suggest that a fairly decent 5-10% correction is likely over the next couple of months.

As we head into the final few trading days of the year, it is worth reminding you of “the rules” we penned in last week’s missive. These processes follow our basic rules of portfolio management, which you can apply to your portfolio as well to reduce overall volatility risk.

Notice, nothing in there says, “sell everything and go to cash.”

Remember, our job as investors is pretty simple – protect our investment capital from short-term destruction, so we can play the long-term investment game.

Of course, if the Fed fails to “extinguish” whatever “blaze” they are currently battling, then we will begin to have a very different conversation about risk, positioning, and liquidity.