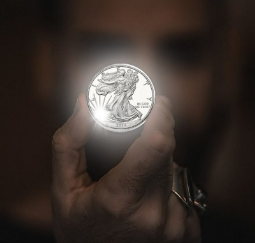 Black Monday hit Wall Street in a BIG BLOODY WAY today.  With oil being the main driver of the economy, U.S shale stocks lost nearly half of their value… IN ONE SINGLE DAY.

That’s correct, the average decline from eight of the top U.S. shale companies saw their stock prices decimated by 48%.  While the energy stocks lost almost 50% of their value today, the precious metals held up rather nicely.

Gold closed up about 0.4%, while silver declined 1.9%.  Of course, not all precious metals investors are happy with the silver price action.  I see some people complaining that silver is selling off with the markets, and it isn’t a good investment.  I wouldn’t be so pessimistic on silver because it takes time for the fundamentals to kick in.

It’s been quite a long time since the U.S. Mint sold 1.3 million Silver Eagles in the first week in a month. Thus, this provides an indicator that precious metals investors are concerned with the Global Contagion and are once again buying Silver Eagles in larger volumes.  While this increased buying won’t impact the silver price currently, it shows us that investors have ramped up physical silver bullion purchases to protect wealth during a time of extreme market mayhem.  And I believe, the worst is yet to come.

There is no better way to describe what took place in the U.S. Shale Patch as a BLOODBATH.  Actually, the term, bloodbath isn’t good enough to illustrate what occurred today in the U.S. Shale Industry.  A Bloodbath refers to stocks or markets that posted losses of 10-20% in a single day.  If the Dow Jones Index lost 20% in one day, trading would be suspended. However, the top eight shale companies below lost an average of 48% on Bloody Monday.

First, here is the list of shale stocks shown in order; Oasis, Continental Resources, Occidental, Marathon, WPX Energy, Diamondback, Whiting, and Pioneer.  Oasis (OAS) suffered the worst carnage by losing 62% with Pioneer (PXD) in front of the pack down, only 37%.  Down only 37%… LOL.

Secondly, get a load of this.  Whiting being the third-largest shale oil producer in the Bakken is now trading at 80 cents a share while Oasis, ranked 5th, ended the day at 33 cents a share. Can you imagine the 3rd and 5th largest Bakken oil producers trading as PENNY STOCKS… LOL.

Let’s rewind a bit and compare the chart above to the following that I did on Whiting and Oasis several months ago:

I mentioned that once Oasis fell below the MAJOR SUPPORT LEVEL of $5.00, it was over for them.  Well, let’s do some math for both of these shale companies:

So, these two stocks lost 96% and 93%, respectively, since July 2019.  Think about this for a minute.  Whiting and Oasis are producing a combined 182,000 barrels per day of oil in the Bakken as PENNY STOCKS!

While it’s true that the Global Contagion gutted the U.S. Shale Industry quicker than I imagined, it would have happened eventually when the PONZI SCHEME FINANCE ran into trouble.  How the hell are these shale companies going to survive on $30 oil??  Sure, we could see a bailout by Trump or maybe even higher oil price support levels, but this will only give the critically ill patient a little longer to COUGH, HACK, and WEEZE before keeling over.

Chesapeake Energy used to be the talk of the town years ago when the Shale Biz was in its infancy.  Early on, it was easy to BAMBOOZLE investors as they were enamored by all the “High-Tech Mumbo-Jumbo.”  Investors with DOLLAR SIGNS in their eyes thought the Shale Industry had reinvented the wheel. However, all the shale industry really managed to do was take Bernie Madoff’s Playbook to a much higher level. While Maddoff’s clients lost $17.5 billion during the Ponzi Scheme, 76% of the funds have been recovered to date. According to Irving H. Picard, the Trustee appointed by the federal bankruptcy court, Maddoff’s investors recovered $13.3 billion of their funds.

Unfortunately, I doubt investors in the Shale Industry will be as lucky.  There is over $300 billion in debt tied to the U.S. Shale Industry, and now, it looks like most of that debt will not be recovered.  And what about the Shale Industry shareholders??  They have lost a boatload of money over the past year.

Regardless, here are the top Shale Gas producers in the United States:

So, how can the second-largest shale gas producer be trading at 16 cents a share???  Good question.

With oil trading in the low $30s and natural gas at $1.78, there is a tremendous amount of DAMAGE taking place in the U.S. Shale Industry.  And, I believe it will only get worse from here on out.

Even though President Trump announced after the market closed today that his administration was going to promise VERY DRAMATIC actions to support the economy, this won’t solve the ongoing Global Contagion that will continue to DESTROY the Just-In-Time Inventory Supply Chain.  Trump might be able to provide tax cuts, Bailouts, larger bond purchases, or more money printing, but that would fix a Global Pandemic.  It reminds me of a Doctor visiting a critically ill patient and telling him that he has stacks of $100 bills to help cure him.

The Global Contagion & Pandemic Are Just In Their Beginning Stage

Unfortunately, there still seems to be a lot of CLUELESS or MISLEAD individuals in the world clinging to the notion that this is ONLY A FLU or worse yet, it’s another MASTER CONSPIRACY by the Elite to defraud the masses.  I would be happy if either of those were true because this VIRUS, according to some high-level experts, is one NASTY ONE for the history books.

As I mentioned in my last article, when this virus first started to spread, I said the same STUPID thing… “What’s all the hype about?  The common FLU is much worse.”  Well, after I spent the past 3-4 weeks researching this virus and watching a lot of updates by Chris Martenson at Peak Prosperity, and numerous Twitter feeds, I believe this virus is much worse than the information the media is releasing to the public.

For example, do you really believe the CCP, the Chinese Communist Party, has this virus under control in Wuhan or the rest of the country?  If that were true, then why is China’s daily traffic still down 75% from what is normal????

How can Chinese daily traffic, including trips by ROAD, RAILWAY, FLIGHT & SHIP be down 75%, while the CCP says they have everything under control??  If traffic is still 75% less than usual, then a lot of Chinese citizens are still either quarantined or in some form of lock-down.

Then we heard that Chinese Auto Sales were down the most ever in February by falling 80% compared to the same month last year.  According to the Yahoo.com article published on March 5th, Auto Sales in China Log the Biggest Monthly Decline Ever:

Thus, Chinese Auto Sales in February were 198,800 compared to 1,260,000 during the same month in 2019. While auto sales picked up towards the end of February, it will be interesting to see if the virus continues to spread to other cities like Beijing, even though the CCP says they have everything under control.

I can’t believe the Western Media continues to publish the Chinese Official statistics.  How did the Diamond Princess ship infect 20% of the passengers while China has 100’s of millions of its citizens in one form of a lockdown or another, and only 81,000 are infected??

Here is my graphic on the infection rate of the Diamond Princess Ship:

Of the total 3,700 crew and passengers, 700 were infected with the virus.  That’s a 20% infection rate of the ship. Do you think the Diamond Princess was just UNLUCKY???  Do you really believe the quarantine process was much worse than in Wuhan China???

Wuhan, China, has a population of 11+ million people.  So, do you believe that only 1/2 of a percent of the population was infected????  Really??  Have you seen the videos of the CCP thugs welding doors shut in apartment buildings so the inhabitants can’t get out to spread the virus??  Have you seen videos of truckloads of coal dumped in front of doors in apartment buildings so people can’t get out??

No… many of you haven’t, so you continue to believe in those GROSSLY under-reported numbers.

Do you truly believe that of the 40,000 Chinese healthcare workers, NOT A SINGLE ONE is infected?? Why would Wuhan still be in quarantine if a lousy 75,000 people were infected with only 3,000 dead??  The common Flu would kill more people, but you don’t see the CCP locking down 100’s of millions of its citizens because of the common flu, do you?

I believe we have only begun to see the DEVASTATION of this Global Contagion.   So, keep an open mind and look at the facts before making a conclusion.