Manipulating The US Dollar Value Lower Is Very Risky 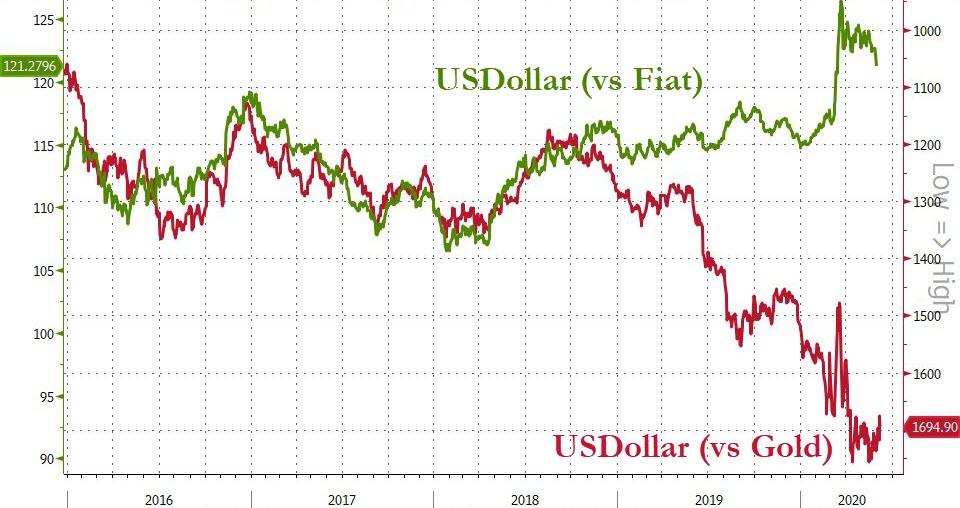 It appears the Fed Chairman Powell has a problem understanding how Main Street works and is more interested in shoring up those in the financial sector. His statements point to him having little interest at this time in forcing some kind of action to contain “soaring risk asset prices.” While some market watchers have voiced concern the Fed may be forced into some kind of action this does not appear to be on Powell’s radar. The fact is, the growing divide between stock prices and earnings expectations signal a dangerous imbalance forming in the market. If this situation spins out of control, be prepared to “watch out below” as things begin to fall like a stone.

Powell seems content in his role as the great enabler moving the global financial system forward. This may even include manipulating the dollar lower which is a very dangerous game. This is especially true at a time so many people are concerned about fiat currencies becoming worthless due to governments abusing their rights to expand the money supply by printing with abandon. Manipulating the value of the US dollar is a very dangerous game because it undermines the global currency market. In many ways, the growing popularity of cryptocurrency is rooted in central banks’ decision to go down this destructive path.

The Fed Has Allowed This To Happen

A major part of the dollar’s role as a reserve currency includes acting as a benchmark by which other currencies and commodities can be valued. A stable dominant  currency results in other currencies being forced to toe the line or pay a stiff price. Ignoring this economic reality translates into pain for those holding the currency of any country that abuses this economic law. This plays out in the account balances of any country that watches its currency fall as it imports far more than it brings in. Wealth tends to flow towards where it will be safe and protected.

To be perfectly blunt, none of the rapid expansion of debt and credit during the last decade could have occurred without the Fed being totally complicit. It has been the Fed that decided to allow the dollar to be used as a global prop. This trend exploded following the 2008 financial crisis when then-Fed Chairman Ben Bernanke adopted policies of massive quantitative easing (QE) to stimulate the economy when standard monetary policy began to become ineffective. Today this policy has become the lifeblood of the global financial system rather than the jolt needed to restore its health.

Across the world, central banks jumped in and allowed governments to abdicate their role in creating an environment where sustainable economies can exist. This could not have been done without the collusion of America’s Federal Reserve. Central banks literally “took turns” stepping up to the plate and announced round after round of easing and lower interest rates while the Fed stood idly by. Following each announcement stocks and asset prices across the world soared. The fact that wealth can rapidly move across borders also causes problems, the inflow or outflow of capital can be very destabilizing.

Low-interest rates coupled with easy money pouring into the economy through the expansion of credit tend to create an illusion of prosperity. This false economy can rapidly vanish. Proof of just how much this economy relies on the continued flow of cheap money is highlighted every time the stock market begins to wobble. We all remember how President Trump ratcheted up his attacks on Fed Chairman Jerome Powell for “ruining the party”. In the past, Trump has pointed to the soaring stock market as confirmation of his skill in growing the economy and leading us forward. In truth, it is his flawed tax reform package that benefited the rich by fostering massive stock buybacks coupled with massive deficit spending has allowed the false illusion of prosperity to continue.

Circling back to the dollar, the Fed, as the dollar’s protector had the power to halt this global creation of stimulus and credit by raising interest rates in America. Instead, it chose to join in and seemed to almost encourage the trend to continue. This central bank experiment calls into question the use of currencies as an economic tool going forward. It has also increased the risk that more currencies will fail as their capability to safely store wealth, is examined. As currencies morph into a tool of government they are being weaponized which takes them further away from their original role as a medium of exchange in commerce.

According to the IMF, the dollar is overvalued by 8-16%. Still, this is not necessarily out of line with fundamentals since the US is growing faster than many other countries. Also, in thesetimes of heightened uncertainty, the dollar is underpinned by safe-haven flows. On more than one occasion, Trump has voiced his desire for a weaker dollar and each time it has had less of an effect on the market. Trump envisions it would help to boost exports and support the US manufacturing sector. It would be wise for the President to understand the dollar is not a pawn to be manipulated around for his pleasure.

If overt efforts are made to lower the dollar’s value, other countries would most likely make an effort to lower their currency which could result in a dangerous race “to the bottom.” This is why the G20 countries have agreed not to target exchange rates for the purpose of competitive devaluation but does allow for temporary intervention to stabilize a currency.It is expected that if risk-off conditions would cause a disorderly rise in USD the probability of intervention by the Trump Administration increases significantly. The history of currency intervention shows it is a useful tool for emerging market countries that need to stabilize exchange rates but little evidence exists that it is effective for advanced economies wishing to target long-term FX competitiveness.

The US Treasury also plays a huge role in international financial policy. This is because it is responsible for managing the USD. Simply put it could intervene and guide the NY Fed’s market desk to weaken the dollar by selling dollars and buying other currencies. The currencies that are used for intervention come from the Fed’s holdings and the Exchange Stabilization Fund of the Treasury which is comprised mainly of the euro and Japanese yen. The two types of interventions are possible, sterilized, and unsterilized.In a sterilized intervention the NY Fed will buy or sell other securities (e.g. sovereign bonds) through open market operations which prevents the intervention from changing the monetary base and interfering with monetary policy. In an unsterilized intervention, it has the ability to influence the money supply and also can impact interest rates.

Again it must be stated, the dollar’s role as a reserve currency gives it oversized importance in world markets. It is indeed the benchmark by which other currencies and commodities can be valued. When all things are considered, fiat currencies are in general a rather weak lot. This means it is best not to look too closely or the system glued together by faith and a prayer could come crashing down. Overall the dollar remains a far better currency to hold than its weak sisters, the euro, and the yen. It should be noted that currency manipulation is a slippery slope bringing into question the real value of a currency further distorting true price discovery. In our current global financial environment, additional manipulation is a very dangerous path to start down.