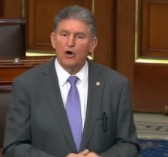 After refusing to reveal how he’ll vote on impeachment, moderate Democrat Joe Manchin on Monday floated a plan to censure President Trump for pausing military aid to Ukraine while requesting an investigation into the Bidens.

“I see no path to the 67 votes required to impeach,” said Manchin. “However, I do believe a bipartisan majority of this body would vote to censure President Trump for his actions in this manner. Censure would allow this body to unite across party lines, and as an equal branch of government to formally denounce the president’s actions and hold him accountable.”

Manchin’s proposal gained little traction among Senate Republicans, though the Never-Trump wing (Romney, Collins and Murkowski) of the GOP may warm up to it.

“His behavior cannot go unchecked by the Senate, and censure would allow a bipartisan. Statement condemning his unacceptable behavior in the strongest terms,” Manchin said, warning that a failure to respond in a bipartisan way to Trump’s actions would set a bad precedent.

“History will judge the Senate for how we have handled this solemn constitutional duty.”

As Axios notes, however:

The issue with a censure vote is that most Senate Republicans don’t think it’s viable, and argue that the impeachment process is too far along.