Kudlow “Doesn’t See A Recession At All”, Warns Full 10% China Tariffs To Go Ahead In December 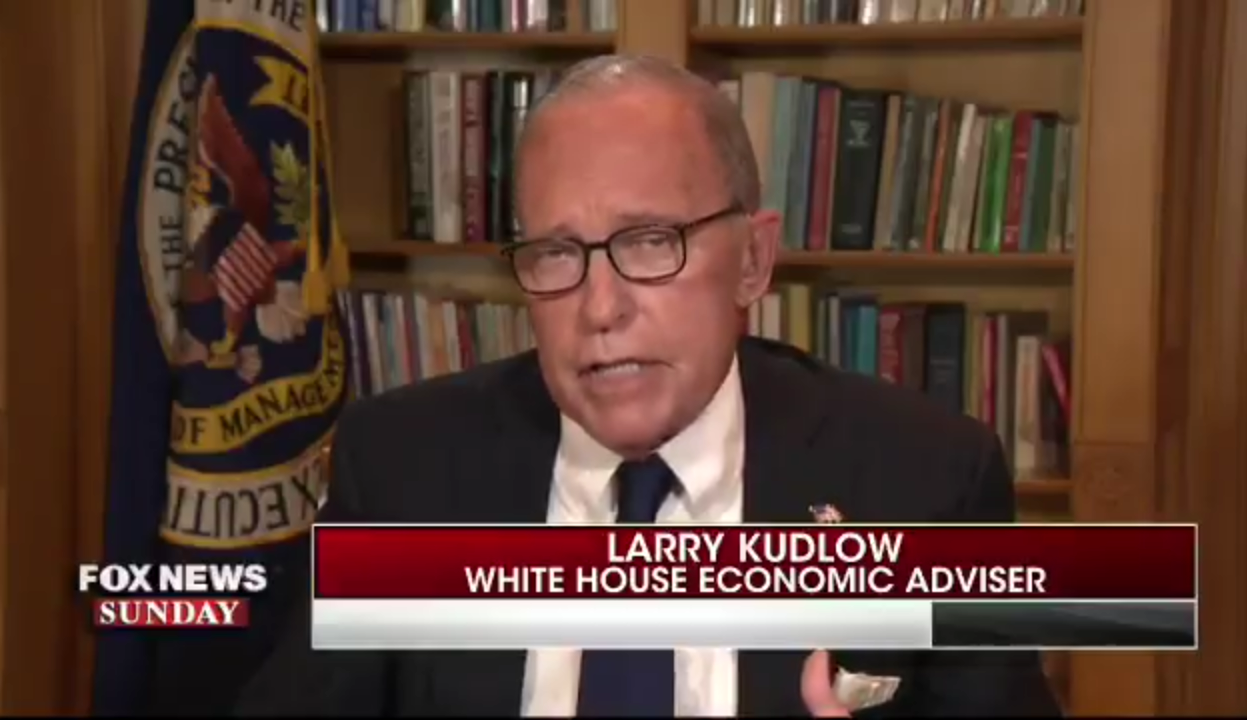 Trump’s chief economic advisor, Larry Kudlow, pushed back against fears of an economic downturn on Sunday saying, “I don’t see a recession at all” when asked by guest host Dana Perino whether the Trump administration is considering concrete steps to stave off a potential recession after the 2s10s yield curve inverted last week.

As a reminder, every 2s10s inversion since 1956 has seen a recession follow, with the average length of time until a recession begins is 16 months.

“The Trump pro-growth program, which I believe has been succeeding, we’re going to stay with that,” Kudlow told Perino.”There’s no recession on the horizon,” he added. “What’s wrong with a little optimism?”

He then repeated for good measure that “I don’t see a recession at all,” and added that there were no plans for additional fresh measures to boost the economy, and that the Trump administration would stay the course on its current agenda.

“Consumers are working. At higher wages. They are spending at a rapid pace. They’re actually saving also while they’re spending – that’s an ideal situation,” he said on a mirror interview later on NBC’s “Meet the Press”, which however begs the question: why is president Trump himself urging the Fed to cut by a 100bps, hinting at an imminent recession.

“I plead guilty to that,” Kudlow responded on NBC.

Fox’s Perino also pressed Kudlow on the ongoing trade war between the U.S. and China. Last week, the administration announced several categories of tariffs on Chinese goods would be delayed until December.

“The goal here is very simple. We want to minimize any impact [of tariffs] on the American consumer. So far it’s been virtually zero,” Kudlow said, echoing comments by White House trade adviser Peter Navarro.

And in a potential blow to any incipient trade deal optimism, Kudlow also admitted that the US and China are in “kind of a technological war”, confirming that the feud between the two superpowers is about much more than just trade; more to the point, he also said that the delayed 10% tariffs on consumer goods imports are likely to go ahead after the Christmas relief period ends, explaining that the administration is giving companies time so they won’t “jack up prices,” he said.

While Trump and his top aides have said repeatedly – and incorrectly – that Beijing, not U.S. companies or consumers, are bearing the brunt of the tariffs imposed on imports from China, the July CPI print jumped in July, driven by costs of shelter, apparel and used cars, and gained the most in a decade in the past two months, the Labor Department reported this month. This website, and other economists, said that the boost in inflation shows the tariffs are gradually filtering through.

The tariff war has increased prices for goods, and U.S. companies are paying the higher levies, according to a survey by the Federal Reserve Bank of New York. The U.S. government collected $57 billion in customs duties in the fiscal year that began Oct. 1, according to the Treasury Department.

And while Kudlow was laying the party line on Fox and NBC, his fellow Trump advisor Peter Navarro, took to CNN, where he disputed that the U.S. had seen an inverted yield curve, often a forerunner of recession because it signals market expectations for weaker growth ahead.

“Technically we didn’t have a yield curve inversion,” he said on “State of the Union.” “All we’ve had is a flat yield curve.”

Well, technically, if one adjusts the yield curve for central bank intervention, for currency hedging costs, and for the shadow Taylor rate which is also affected by QE, the yield curve has never been more inverted. But we digress.

Navarro also added to Trump’s relentless criticism of Powell and the Fed on Sunday. “The Federal Reserve chairman should look in the mirror and say ‘I raised rates too fast,’” Navarro said on CNN, although if one listens to what Powell himself is saying these days, the China trade hawk is right.

Which is why, Navarro added that additional Fed rate cuts beyond the quarter-point move in July will be a good thing – if not for America’s yield starved savers and retirees – and a potential easing by the European Central Bank in September will help Europe’s struggling economy.

Navarro also played the bad cop in the China trade war, saying the U.S. still has “significant structural issues” with China, while Kudlow was good cop, and said he was looked forward to a “substantive renewal” of talks with Beijing. However, he provided no specifics on the as-yet unrevealed “positive news” out of recent telephone talks between the two sides.