JPMorgan: The Fed Will Need To Restart QE Soon 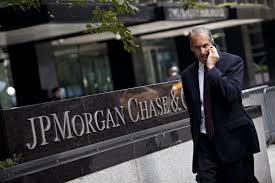 Earlier this week we received an unexpected email from a researcher at the Federal Reserve with an “urgent request” to provide the US central bank with details on an analysis we presented on Tuesday, according to which the Fed was about to be hit with a major liquidity drain as the Treasury, unshackled from the limits of debt ceiling constraints, set off to replenish its cash balance from roughly $130 billion to $350 billion over the next two months, as disclosed recently by the US Treasury.

The reason why the Fed reached out is because as we explained in “Forget China, The Fed Has A Much Bigger Problem On Its Hands“, according to an analysis from Bank of America, the Fed may be forced to launch Quantitative Easing as soon as Q4 to provide the market with the much needed liquidity, or else suffer the consequences of a major liquidity shortage. To wit, in describing the various steps the Fed can engage in, this is what the BofA strategist said:

Outright QE: after OMO dealer capacity is exhausted the Fed may need to start permanently expanding its balance sheet. The Fed would likely describe this as offsetting “bank reserve demand and growth in other non-reserve liabilities”. Regardless, it would represent the Fed permanently buying USTs outright to maintain control of funding markets well above the ZLB.

Apparently this is something that the Fed, which until recently was engaging in additional liquidity draining via QT, was unaware about, and since a return of QE – something that Trump has yet to demand – would cause all sorts of political problems and demand lengthy congressional explanations, the BofA analysis was one of the various factors cited for the dramatic rebound in the market starting on Tuesday, which promptly transformed into the strongest 3-day rally of the year.

Well, it’s no longer just Bank of America that believes the Fed may be forced to pursue QE to replenish the sudden drain in interbank liquidity that would accompany such a dramatic cash rebuild by the Treasury.

In the latest Flows and Liquidity report from JPMorgan’s Nikolaos Panigirtzoglou published late on Friday, the strategist analyzes various components of market liquidity and concludes that “liquidity will likely continue to tighten gradually in the US banking system even after the Fed has stopped its balance sheet shrinkage.”

Specifically, the JPM analysis looks at the bank’s model of US excess money supply, which derives a medium-term money demand target based on 1) the transaction motive, which relates money to nominal incomes and 2) the portfolio motive, which relates money to the nominal values of other assets such as bonds and equities, and 3) the precautionary motive, proxied by US policy uncertainty, whereby agents wish to hold more cash during periods of elevated risk perceptions.

This model suggests that this broad US excess liquidity evaporated during the course of 2018 and shifted further into negative or contractionary territory this year.

The last time this measure of US excess money supply had shifted into negative territory was during the euro debt crisis years of 2010- 2012, which prompted the Fed to launch QE2 (as well as Operation Twist and QE3) and also eventually resulted in the ECB violating Article 123 of the Maastricht treat, prohibiting monetary financing of states, and led to Draghi launching his own QE.

As Panigirtzoglou further explains, the contraction in JPM’s measure of broad liquidity this year has been mostly more driven by a rise in demand and less by a fall in money supply (relative to US GDP). In particular the main drivers have been the rise in uncertainty and the rise in the stock of US financial assets, both of which depress excess money supply via boosting demand.

And while the full analysis focuses on various minutae beyond the scope of this article, one of the things the JPM strategist focuses on was the market’s worries about bank liquidity which have intensified over the past year as the Fed funds rate approached the Interest On Excess Reserves (IOER). This resulted in the Fed twice, in June and December 2018, raising the IOER rate by 20bp rather than the 25bp increase in the Fed funds corridor, and in April 2019 cutting IOER by a further 5bp.

The above chart confirms that starting in early 2019, excess reserves in the banking system shrank to precarious levels, and some needed to resort to the Fed funds market to meet their liquidity needs as reserves are not uniformly distributed across the banking system; some or all of these banks ended up paying rates than are even higher than the IOER.  As the chart above shows, this appears to be happening since the end of last year. On December 19th the Fed funds volume-weighted 75% percentile rose above the IOER rate for the first time. In other words, a quarter of the Fed funds market volume is trading above the IOER rate at the time. Since then this tightening has broadened with the median Fed funds rate moving above the IOER in March this year and fixing between 4-6bp above IOER persistently since then.

What is causing this demonstrated shrinkage in liquidity? The key driver is, of course, quantitative tightening, or the shrinking of the Fed’s balance sheet (which the Fed announced it would halt on July 31). The reserve balances at the Fed began to decline well before the Fed started shrinking its balance sheet at the end of 2017. Figure 11 shows that these excess reserves by US depository institutions (in excess of regulatory minimum reserve requirements) peaked almost five years ago at $2.7tr. They had declined to $2.1tr by September 2017 just before the Fed embarked on its balance sheet normalization journey. They declined by another $600bn since then to $1.5tr currently in line with the Fed’s balance sheet shrinkage.

As JPM explains, that earlier reserve depletion has been the result of mostly two factors: the fast growth of banknotes in circulation from $1.2tr in 2014 to $1.7tr currently and the build-up of the Treasury’s General Account at the Federal Reserve from an average of only $50bn before 2014 to around $350bn at the beginning of this year. Both of these two types of Federal Reserve liabilities had drained liquidity from the US banking system as they grew at the expense of depository institutions reserves.

Here is where we get to the issue at hand, namely the upcoming rapid liquidity drain as a result of the Treasury’s stated desire to build up cash. As discussed previously, the Treasury’s General (cash) Account has been depleted since the beginning of the year due to the debt ceiling issue, offsetting in part the reduction in reserves caused by the Fed’s balance sheet shrinkage, but this is now set to go into reverse into year-end as the Treasury issues T-bills to replenish its General Account. In other words even with the Fed stopping its balance sheet shrinkage, we are likely to see significant reserve depletion into year-end as the General Account is replenished following a resolution in the debt ceiling issue.

This is precisely what BofA looked at last week when it concluded that the roughly $200 billion liquidity drain over the next two months will be so sever, the Fed may have no choice but to resort to QE.

But wait, wasn’t the end of QT – something so urgently demanded by president Trump – supposed to neutralize the rapid depletion of reserves?

While the termination of the Fed’s balance sheet shrinkage process would by itself slow the reserve tightening process, it won’t stop it. This is because of three reasons.

Putting this all together implies – to JPMorgan at least – that liquidity will likely continue to tighten gradually in the US banking system even after the Fed has stopped its balance sheet shrinkage, and – here is the punchline – in order to stop this liquidity tightening from advancing further, “the Fed may need to start open market operations sooner rather than later to inject reserves into the US banking system.”

Open market operations is, of course, another name for QE, which as we have been saying all along is inevitable if for no other reason than to monetize the upcoming wave of UST supply especially if China decides to boycott (or outright sell) US Treasurys. Indeed, the Fed may have no choice but to launch QE simply because of too much Treasury supply and the market’s ability to warehouse it – a challenge that will only grow in the coming years, which is why we have been warning for much of the past year to watch out for market crashes – just like the failure of Lehman – these are a convenient and easy scapegoat for the Fed returning launching another round of QE… much to Trump’s applause.