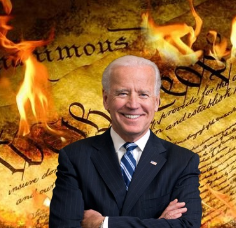 Democrat Joe Biden is essentially pushing to reinstate the “assault weapons ban” which expired in 2004. Not only does he want that ban in place, but he also wants to ban all semi-automatic weapons in the process, all but eliminating the second amendment.

Thursday night during a CNN town hall, Biden talked of meeting with victims’ families after the December 14, 2012, Sandy Hook Elementary school shooting and also meeting with families from the February 14, 2018, Parkland high school attack. He ramped up his vicious attacks on innocent people by saying he would drastically reduce their basic human rights.

Joe Biden ratcheted up the Democrat Party’s attacks on the Second Amendment:

Biden: ban “assault weapons” & “get those clips that have multiple bullets in them not for sale, not be able to sell silencers, all those things.”

This is a broadside on every law abiding American.

Biden’s plan would ban nearly all firearms currently on the market. This isn’t extreme either, consider other democrats have admitted that they want a complete totalitarian regime in charge of all of us – even to the point of saying they will forcibly take your guns at gunpoint. Because it’s ok for politicians to protect themselves against us, but not ok for the rest of us to protect ourselves from their control and authoritarianism.

George Soros Is Lobbying Lawmakers To Take Your Guns Away

Communist Vows He IS Coming For Your Guns

Biden made similar remarks last September, saying, “The idea that we don’t have elimination of assault-type weapons, magazines that can hold multiple bullets in them, it’s absolutely mindless.”

“It’s no violation of the Second Amendment,” Biden falsely claimed. The democrat, who made the remarks while talking to reporters, later said that there should be no compromise with the Republicans when it came to his extreme, draconian, enslavement, anti-Second Amendment proposals. According to Biden, only the ruling class should have guns.

Biden was a leading proponent and sponsor of the federal “assault weapons” ban, a subset of the Violent Crime Control and Law Enforcement Act of 1994. Throughout his career, he has generally been supportive of curtailing Second Amendment rights. Biden has also supported mandating five-day waiting periods for gun purchases, as well as closing the alleged “gun show loophole.” Biden supports a ban on the undefinable sub-class of firearms referred to as so-called “assault weapons” — a line of thought that, if taken to its logical conclusion, could lead to the banning of all semi-automatic firearms in America. -The Daily Wire

Self-Defense Is A Basic Human Right: A Website That ENDS The Gun Control Debate For Good

As we already know, Biden’s extreme proposal of banning semi-automatic firearms would do little to reduce mass shootings in the United States, according to a new study released this month by Johns Hopkins Bloomberg School of Public Health, named after notorious anti-Second Amendment activist billionaire Michael Bloomberg, who is also running for president as a Democrat (and pushing extreme gun control measures himself.) The study “did not find an independent association between assault weapon bans and the incidence of fatal mass shootings after controlling for the effects of bans on large-capacity magazines.”