Iran War Was “Closer Than You Thought”, Trump Admits 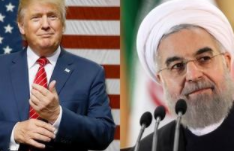 In what the administration has described as an “off-the-record lunch” on Tuesday, President Trump told television anchors hosted at the White House that war with Iran was “closer than you thought,” according to The Wall Street Journal.

It’s an annual tradition for the president to host television anchors from major networks just ahead of the State of the Union address, which was delivered last night.

The private luncheon marks the first time the president gave candid remarks confirming the US stood very close to entering another major war in the Middle East, which was on the heels of the Jan.3 assassination of IRGC Quds Force chief Qassem Soleimani and subsequent Iranian ‘retaliatory strike’ on Jan.8 against a US base in Iraq.

During that time in early January the hashtag WWIII was trending on Twitter, along with countless social media viral memes warning the US stood on the brink of major war with Iran.

In apparent confirmation that the public’s fears were justified, the WSJ describes further of the president’s off-the-cuff comments:

The president’s comment on Iran came after one attendee asked him how close the U.S. came to going to war with Iran earlier this year, after the U.S. killed a top Iranian military commander, Maj. Gen. Qassem Soleimani. Iran responded with a missile barrage on Iraqi bases housing U.S. and allied military forces. The Iranian strikes didn’t result in any U.S. deaths.

And further, the report notes:

Mr. Trump didn’t elaborate on why war with Iran was “closer than you thought,” the people said.

During the lunch, the president spoke mostly about conservative talk-show host Rush Limbaugh, who later in the evening received the Presidential Medal of Freedom award during the State of the Union address itself.

This is consistent with his previously dismissing reports of scores of US troops suffering from Traumatic Brain Injury (TBI) as a result of the missiles’ impact and blasts as but a few mere “headaches”.