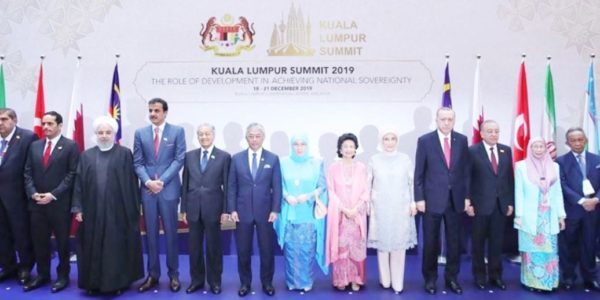 Leaders from countries such as Malaysia, Turkey, Iran, Qatar, and Indonesia attended the summit. They aim to “discuss and find new solutions to problems facing the Muslim world as well as to improve the wellbeing of Muslims and Muslim countries in general,” the official website of the Prime Minister’s Office of Malaysia describes.

The leaders of Malaysia, Turkey, and Iran spoke at a roundtable session on Thursday where the subject of cryptocurrency was discussed, the Associated Press reported, adding:

Rouhani proposed an Islamic financial payment with Muslim countries trading in local currencies and the creation of a Muslim cryptocurrency to cut reliance on the U.S. dollar and weather the effects of market fluctuation.

He also urged Muslim nations “to deepen financial and trade cooperation to fight what he described as U.S. economic hegemony,” the news outlet conveyed. “The Muslim world should be designing measures to save themselves from the domination of the United States dollar and the American financial regime,” he was quoted as saying. The U.S. currently has sanctions against Iran. In addition, a Senate committee approved a bill last week to impose sanctions on Turkey.

Rouhani also talked about how rising extremism, coupled with other challenges such as weak governance, poverty, and corruption, are endangering sovereignty and paving the way for Western interference in Syria, Yemen, Afghanistan, and other Muslim nations.

After the roundtable session, the Malaysian prime minister was asked by the media about his response to Rouhani’s suggestion of a unified Muslim cryptocurrency. According to Bernama, the Malaysian government’s news agency:

Prime Minister Tun Dr Mahathir said he is open to the idea of a unified cryptocurrency for Muslim countries.

“It is the first time we hear Iran and also Turkey are of the opinion that if we do not have American dollars, we can use our own currency or one common currency that we (Muslim nations) can create if we agree,” the prime minister was quoted as saying. “Malaysia had mooted the idea of a common currency for Islamic nations a long time ago, but the big powers had then stood in the way of that proposal … This is because when their currencies are used by others, it gave them added strength,” he elaborated. The prime minister further said that Malaysia is willing to work with Iran and Turkey in technological fields as it is much more advanced in these areas than other Muslim countries.

Do you think there should be a unified cryptocurrency for Muslim countries? Let us know in the comments section below.

Disclaimer: This article is for informational purposes only. It is not an offer or solicitation of an offer to buy or sell, or a recommendation, endorsement, or sponsorship of any products, services, or companies. Bitcoin.com does not provide investment, tax, legal, or accounting advice. Neither the company nor the author is responsible, directly or indirectly, for any damage or loss caused or alleged to be caused by or in connection with the use of or reliance on any content, goods or services mentioned in this article.

Images courtesy of Shutterstock, the Islam Times, and TIME USA.