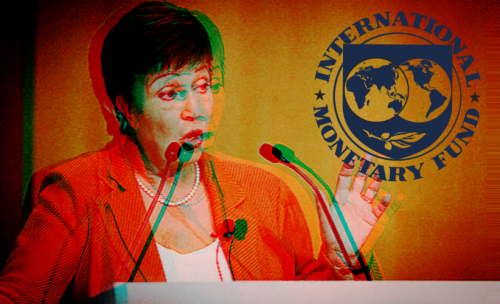 How’s this for some New Years optimism?

The new head of the IMF, who took over from Christine Lagarde in November, warned that the global economy could soon find itself mired in a great depression.

During a speech at the Peterson Institute, IMF Chairwoman Kristalina Georgieva compared the contemporary global to the “roaring 20s” of the 20th century, a decade of cultural and financial excess that culminated in the great market crash of 1929.

According to the Guardian, this research suggests that a similar trend is already under way, and though the collapse might not be around the corner, when it comes, it will be impossible to avoid.

While the inequality gap between countries has closed over the last two decades, the gap within most developed countries has widened, leaving millions more vulnerable to a global downturn than they otherwise would have been.

In particular, she singled out the UK for criticism: “In the UK, for example, the top 10% now control nearly as much wealth as the bottom 50%. This situation is mirrored across much of the OECD (Organisation for Economic Co-operation and Development), where income and wealth inequality have reached, or are near, record highs.”

She also warned about the potential for climate change to become a bigger obstacle for humanity, while increased trade protectionism instills more volatility in markets.

She added: “In some ways, this troubling trend is reminiscent of the early part of the 20th century – when the twin forces of technology and integration led to the first gilded age, the roaring 20s, and, ultimately, financial disaster.”

She warned that fresh issues such as the climate emergency and increased trade protectionism meant the next 10 years were likely to be characterised by social unrest and financial market volatility.

“If I had to identify a theme at the outset of the new decade, it would be increasing uncertainty,” she said.

Back in December, the Bank of England said it would set up “tough” climate stress tests for banks and insurers in the UK. The tests would involve three different scenarios stretching out over decades.

However, critics quickly pointed out that the tests would essentially be toothless. Regardless of whether institutions pass or fail, the results will initially only be published in aggregate without naming individual institutions, though the BoE hasn’t ruled out naming and shaming in the future.

While geopolitical tensions are back in the headlines thanks to Iran, Hong Kong, and a rash of protest movements around the world, few would argue that the bull market that dominated the last decade was in any way impacted by geopolitics. Instead, the market largely ignored geopolitical tensions, and allowed itself to be carried ever-higher by a flood of easy money from central banks.

This is further evidenced by the fact that, every time the Fed has tried to wean the American economy off of rock-bottom interest rates or the central bank’s ever-expanding balance sheet, markets have reacted with fury.

Having considered all of this, we’d like to present another scenario: if Trump loses in November, and the Fed regains the courage to raise interest rates now that President Trump isn’t around to publicly browbeat and humiliate them, that might be enough to send markets into a tailspin, even if the Dems take the ‘market friendly’ road and nominate Joe Biden.