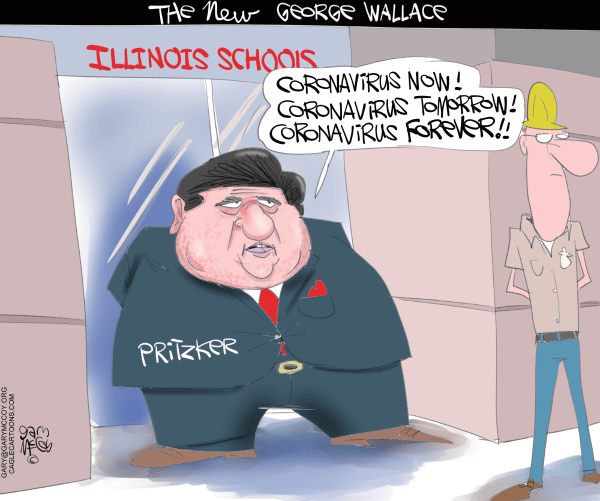 Over two thousand years ago, Marcus Tullius Cicero devoted his life to a struggle to preserve the best of the Roman Republic – constitutional checks on power, the rule of law and, to a significant degree for the age, democracy and individual rights.

It’s all there in Cicero’s story – all of today’s battles for the same goals. Some of those battles were small and some large, some fought in court and some on the battlefield, but many were ultimately decided not by law or armies but by the power of public opinion.

And so it has been for the centuries since Cicero. A Star Wars sequel gave us a modern adage for the role of public opinion: Liberty dies with thunderous applause.

For those reasons, it’s particularly alarming to see the public’s opinion about the clear illegality of Governor JB Pritzker’s emergency stay-at-home orders, which is indifference.

That indifference is almost universal in Illinois’ press. Editorial condemnation of the order’s illegality has been almost nonexistent. A particularly sad example was an April 23 Chicago Tribune editorial. Flattening the curve is good, it said, so hurrah for extending the order. No mention of its illegality.

Same with the general public. Polling says 93% of Illinoisans approve Pritzker’s orders, including 75% who said they strongly approved. Illegality apparently is of no consequence.

Maybe the public thinks this is about some petty “technicality.” Maybe they think it doesn’t matter because the order is sensible.

But Pritzker’s orders are illegal, flagrantly so, and it matters. State authorization for the nearly unlimited power asserted under the orders limits them to 30 days. But Pritzker claims he can extend that to eternity simply by issuing successive 30-day orders forever, an arrogant, autocratic and untenable interpretation of the statute.

The arguments presented by the Illinois Attorney General in a memorandum defending the orders are cringeworthy:

Pity us if those arguments are accepted and become precedent.

They were made in the appeal of a temporary restraining order issued on April 27 against extension of the first stay-at-home order. The lawsuit underlying the order is being refiled and probably will be appealed. We can only hope not only that the rule of law prevails but that the general public comes to understand what is at stake.

The torch had passed, he said, to a new generation of Americans “unwilling to witness or permit the slow undoing of those human rights to which this nation has always been committed.”

The torch passed again since then. Will this generation permit what JFK’s would not?

Authored by Mark Glennon via Wirepoints.org,