Illinois Exodus alert: Why Chicago skyscrapers and your home are worth less 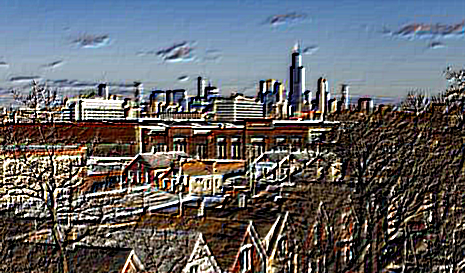 Chicago, bustling city of big business and gleaming skyscrapers, looks vibrant. Yet there’s a sense of foreboding in big-money circles — a legitimate concern that Illinois’ fiscal rot is scaring away jobs and investment.

This is bad news for everyone who works and pays taxes in the Chicago area and throughout the state. The situation is especially perilous for homeowners, because the weaker the Illinois economy, the fewer homebuyers there are. And thus, the more likely Illinoisans will see their property values decline.

The perception out there — Beware of Illinois! — is mostly due to state government’s irresponsible stewardship of the people’s money. Illinois has an enormous hole in its state employee pension system. The latest estimate is a $137 billion unfunded pension liability — essentially, money promised to government retirees that Springfield hasn’t set aside. Chicago and other Illinois cities have their own menacing budgetary and pension woes.

There are several ways for Illinois to climb out of its pit: Spur job growth to create more taxpayers; cut government services and benefits; raise taxes on everyone who resides in the state and chooses not to leave. That third option is what gives employers and investors pause about doing business in and around Chicago. Who wants to be the last ones at the party? It only means you’ll have to clean up the mess. That’s what we mean by the Illinois Exodus.

The latest warning signs aren’t immediately obvious. In the Loop, for example, thousands of workers are moving into the newly refurbished old main post office. Nearby, international investors are teaming up to build the 50-story BMO Tower. There are other good signs: The tech industry is growing. North Side neighborhoods are flush with condo development. Obviously, people want to live and work in Chicago. Betting on Illinois’ future is the problem.[Most read] Federal agents and Chicago police were confiscating drugs and guns from luggage when rapper Juice Wrld suffered seizure at Midway, officials say »

Over the past year, prices for office buildings, retail centers and industrial real estate in the Chicago area have fallen 4.1%, according to Real Capital Analytics, a research firm. Buying levels have dropped through the floor for both Chicago and suburban business hubs: The dollar volume of deals is down 42% this year.

The Wall Street Journal reported Chicago’s dismal 4.1% price decline for these commercial properties and added a spit take: “That was the worst performance among major metropolitan areas analyzed by the company, behind even crisis-stricken Hong Kong, where prices fell 2.6%.”

Chicago is less desirable than Hong Kong under siege by authoritarian China? Uh-oh.

The high cost of uncertainty

What’s going on? There’s more than one reason for real estate anxiety. Cook County Assessor Fritz Kaegi is undertaking a long-overdue revision of the system for calculating property taxes. A lot of commercial properties that were underassessed will see increases. Until the dust settles, some investors are staying away from metropolitan Chicago. That’s a short-term issue.

The long-term uncertainty is the impact of poor governance on this state’s and city’s economic future, including the impact of rising taxes on property values. Here’s the Journal’s take and, spoiler alert, it won’t make you feel better about investing in Chicago’s future — or about the value of that ranch house you may own in Highland Park:[Most read] Friends rescue Chicago couple facing tragic end-of-life decision while living abroad »

“The primary reason that Chicago is struggling from an investment-sales perspective is the outlook for higher taxes in the future,” Dave Bragg, a managing director at Green Street, told the Journal. In a report last year, Green Street argued that Chicago is nearing a vicious cycle where departing workers reduces tax revenue, forcing the city and state to raise tax rates, which increases out-migration, and so on.

Jim Costello of Real Capital Analytics tells us investors worry that Illinois governments’ eventual solution to their pension crises will be to soak property owners with enormous tax increases. That would destroy building values. “Investors are rightly concerned about what happens next,” he says.

What happens next? It’s the same question being asked by others, including employers and homeowners. That’s what discourages companies from creating more jobs here — and also drives the Illinois Exodus. Why not bypass Chicago and locate a new office in Dallas, or move the family to Tennessee instead of dealing with the uncertainty and potential misery of Illinois in the 2020s?

The Journal article reminded its national audience — so no, there’s no camouflaging Illinois’ lousy public finances and the repercussions — that Chicago’s housing market is among the weakest in the top U.S. metropolitan areas.

According to the Federal Housing Finance agency, Chicago-area prices rose 1.5% in the past year, compared with 4.9% for homes nationally.

The way out of trouble

As we noted, there are steps to take that would ease the pension problems. “Something has to happen where the city and state are put onto a path of sustainability for the budget and the pensions,” says Costello. “It sounds like somebody is going to have to take a loss, either the pensions or taxpayers.”

Gov. J.B. Pritzker wants Illinois voters to approve a constitutional amendment next November to allow a graduated income tax, which he says would affect only the top 3% of income tax filers.

Our concern with the Pritzker Tax is that his proposed revenue increase wouldn’t be enough to fix Illinois’ finances, but would be enough to exacerbate the Exodus. Once Springfield has permission to raise tax rates, lawmakers won’t suddenly exert self-control. They’ll raise taxes on the middle class, too, without cutting spending.

The best way to rescue Illinois governments from themselves is to curb public pension benefits earned in the future. That also would require amending the Illinois Constitution. Pritzker, famous for saying “Let the people vote” on his Pritzker Tax, insists that he won’t let the people vote on pension reform. That invites voters to reject the Pritzker Tax.

Fixing state finances won’t be easy or inexpensive. But to delay the reckoning with pension costs and enormous public debts accomplishes nothing positive. Stalling makes everything worse, in fact.

Via The Chicago Tribune Editorial Board