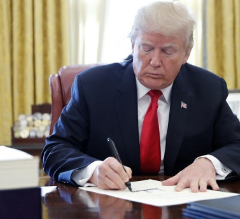 Ignore the naysayers, the Trump administration has successful engineered an economic boom.

I was recently on Cheddar discussing the markets when the anchor raised the fact that the Trump administration failed to achieve its economic goals.

First and foremost, the economic data put out in the U.S. has become EXTREMELY politically biased.

The reason for this is simple, many of the people who compile this information are Democrats who hate the President (the bulk of Government employees live and work in Northern Virginia/ D.C. which went 92% for Hillary Clinton in 2016).

Throughout the Obama years, time and again economic data was massaged to make the so-called “recovery” look better than it was.

The reality is that most of the 2008-2016 period would have qualified as a recession based on objective analysis. Case in point, over 90% of all jobs created by the Obama administration were part-time jobs.

In contrast, we are now seeing the exact opposite occurring with Trump administration: the economic data is being massaged and gimmicked to make the economy look worse.

Real GDP growth is above 3%, and real income growth/ job growth/ etc. are all booming.

If you do not believe me, take a look at the stock market, which is the single greatest discounting mechanism on the planet.

With that in mind, what does the below chart tell you about the state of the U.S. economy? More importantly, what is the stock market is telling us about what’s coming down the pike for the U.S.?

I believe the market is “showing” us that President Trump is going to win the 2020 election in a landslide.

The Trump administration has successfully “branded” the stock market. As such, stocks are closely aligned with the President’s odds of re-election in 2020.

Which is why, this recent breakout to new highs is telling us Trump wins 2020 in a landslide… and that this time there will be few obstacles to his economic agenda.

I want to be clear here…

I DO NOT care about politics. You can hate President Trump or you can love him. That’s 100% up to you.

But the reality is that under the Trump administration the stock market is giving us a once in a lifetime opportunity to GET RICH from our investments.

The MAGA Portfolio: Five Investments That Will Make Fortunes During Trump’s Second Term.

In it, I detail five HIGH OCTANE investments that are primed to EXPLODE higher when President Trump wins a second term.

In it, I detail five unique investments that I expect will produce the most extraordinary gains during President Trump’s second term.

Each one of these investments is in a unique position to profit from the combination of Trump economic reforms and Fed monetary easing, combining high growth opportunities with extreme profitability.