“If You Liked It Up There, Do You Love It Now?” 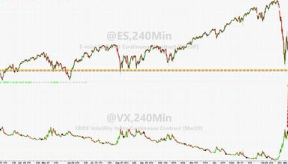 Over the course of the last few hours, we have been moving back and forth between being aghast at the market carnage, and all it might imply, and feeling agonizingly anxious about missing out on the rebound sure to be coming.

Those are big emotional swings even by this market’s standards. There’s nothing wrong with trying to follow the momentum of the moment, but don’t mistake it for careful analysis. Whatever asset prices decide to do for the balance of the day will only be obvious in retrospect. And don’t let anyone tell you otherwise.

Do a lot of things suddenly look cheap compared to where they appeared temptingly priced for a buy last Friday? You bet. But, most likely, only if you weren’t long them over the weekend. This is fundamental news being mixed in with position liquidation. And how much is one versus the other is still anyone’s guess. Moves of this size beget big swings. Lots of opportunity, by definition. But those gyrations, also, have less informative value than would normally be assumed.

Day traders are looking to capitalize on a V-shaped recovery. Not of the economy but in the market, as people chase the price action. Investors, on the other hand, have to consider whether or not systemic risks have changed the asset valuation calculation. Are the risks of recession different than we thought? Is there a greater likelihood that the much-pined-for fiscal stimulus will be coming?

My guess is that the pull of looking to buy the dip and rely on official intervention is such that traders will have a hard time resisting the urge to jump in. The test will be if they can stay disciplined enough not to spend their day buying high and selling low. If you are day trading, stick with intraday charts.

There will be a lot of things mispriced versus other things. That is an unavoidable by-product of generalized panic moves. Picking out the winners from the “Which one doesn’t belong” game will become far easier the more things calm down. Until then, the game remains “Correlation of One.” There are assets out there that are screaming not to be lumped in with everything else. It isn’t always clear which bucket any particular one belongs in.

If you had told me that 30-year Treasuries would trade where they currently are, I’d have said that’s crazy. They suddenly don’t seem so terribly out of whack given the state of things. Especially with bunds yielding what they do. The dollar, on the other hand, looks wrong to me. But there are no shortage of people willing to take the other side of that debate. The bonds are repricing to the facts as we currently see them. The dollar strikes me as getting the story wrong. But it wouldn’t make the P&L impact any less. Or the need to leave stops any less important. Like it or not.

We’ve already begun the rate-cut discussion. It strikes me as wholly premature.

There’s a big difference between being proactive and in full-out panic mode. The Fed did just move less than a week ago.

The fed fund futures are now pricing a 73% chance the Fed cuts to zero next week.

So, cut to zero is now the consensus call.

Note markets are so extreme that that Bloomberg’s WIRP is NOT correct.

CME Fed watch is closer to what is priced. Use this.https://www.cmegroup.com/trading/interest-rates/countdown-to-fomc.html …

But we’ve been conditioned to think that is the default option in all cases. I’m curious to see if there is a noticeable reaction mid-morning if they opt to wait and see. Another reason this won’t be as easy a day as some think. A lot of traders are looking to try to fade what seems to them to be excessive moves.

But, curiously, perhaps tellingly, not many are saying, “If you liked it up there…”