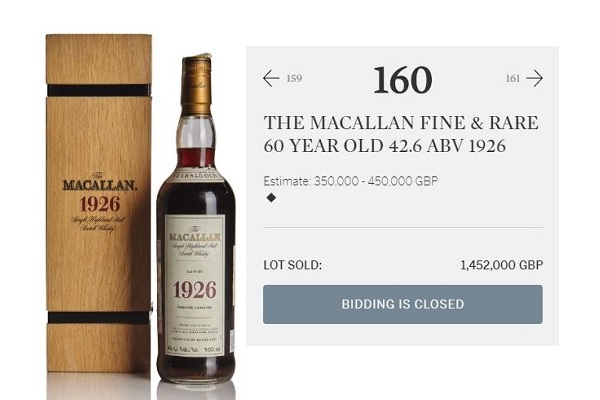 That’s when the government and the Fed claim that improvements to quality, etc, offset the increase in price.

From the Bureau of  Labor Statistics:

The new version of the item may provide additional benefits or, in some cases, reduced benefits. This change in benefit is quality change.

While theoretically “in some cases, reduced benefits” is possible, in practice that doesn’t happen because in the real world, any thing with “reduced benefits” would naturally require the item to be calculated in the CPI at a higher price – something the government is not going to do.

The details from Market Watch (bold and bold added for emphasis):

A bottle of Scotch whisky dating back to 1926 has just shattered world records, fetching a staggering $1.9 million at a Sotheby’s auction in London.

The “Holy Grail” of whiskies with the eye-watering price tag is a bottle of “The Macallan Fine and Rare 60-year-old 1926” single malt. It was distilled in 1926, and aged in casks of “European Oak” for 60 years before being bottled in 1986.

Sotheby’s, the world’s largest auctioneer, said it was the highest price ever paid in public for a bottle of whisky or any other drink. The Guinness World Records could not immediately be reached for comment.

The whisky sold for more than three times the price of reportedly one of the most expensive bottles of French wine (if not the most expensive) ever sold, which went under the hammer at Sotheby’s in New York a year ago.

Here’s a screenshot from Sotheby’s:

Now, how exactly would the Fed and the government say this bottle actually cost less than the one which sold in 1987?

With a “hedonistic adjustment”.

You see, the Fed & government would say, “this latest bottle of Scotch whisky from the same batch had an additional 32 years to age in the bottle, which therefore improves the quality of the whisky, so much so that instead of costing $1,900,000, the cost, when making a hedonic adjustment, is actually $7,300, which shows this bottle actually cost less than the one that sold in 1987”.

You may be thinking it’s hyperbole to say the latest bottle costs less, but it’s no exaggeration.

This is what the Fed and government do, all-the-time, to understate price inflation.

This is only one of the tools the Fed & government use to accomplish this.

But let’s not sugar coat it one bit, especially looking at the estimate.

Why was Sotheby’s so far off with its initial price estimate?

Sotheby’s knows its stuff when it comes to auctions.

Yet the bottle sold for four times estimate.

For things sold at auction.