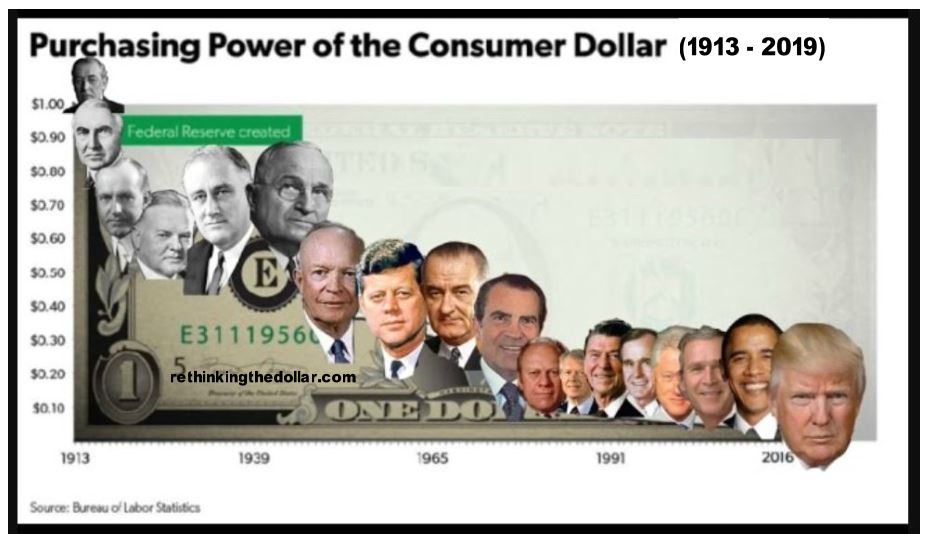 HYPERINFLATION OF THE DOLLAR IS HERE! There is only one thing that’s missing until it’s blatantly obvious…

Hyperinflation of the dollar isn’t coming.

By the Fed’s own admission in their slow, torturous murder of the dollar since 1913, we’ve already had the hyperinflation:

How does it become totally worthless?

We are just missing one thing, and that’s the “crack-up boom”.

Oh, just the mad scramble to get out of US dollars by any and all means necessary, and it will not be limited to the super rich, but rather, anybody with dollars, saved, hidden, or otherwise, will be getting out of their dollars by buying up everything in sight that’s durable or non-perishable.

A game of global hot potato, if I may.

A massive shopping spree, fueled by the speed of the internet.

Today we got a fourth Tweet from President Trump about money printing, which Trump talks about by using “pump money”:

Notice the exact phrase has changed from earlier in the month, but the meaning is still the same.

We now have the phrase “pump money” to add to our hyperinflation indicators.

It really is not difficult to understand what it means to pump money.

Earlier in the month we see the word was “pumping”:

Does this mean “pump” is more desired than “pumping”?

That’s a question for the market riggers who program the HFT algos.

Because at the beginning of the month, it was “pumping money”:

It’s funny too, in an ironic kind of way, what else is said in that Trump Tweet, because when we talk about gold & silver price “manipulation”, we get called “tin-foil hat wearing conspiracy theorists”, and I’m comfortable wearing that hat.

I wear a lot of hats.

When Trump talks about “manipulation”, such as in the Tweet above, he’s praised for taking the fight to the manipulators.

Regardless, that July 3rd “pumping money” phrase is the same one used back in May:

To be clear – we don’t and won’t win by printing money.

Nobody ever wins the printing game.

And where to we go from here?

President Trump is telling us he’s just going to “print the money”.

For now, however, he’s using the term “pump”.

Once he fires of the “Let’s just print the money” Tweet, it should be “game over” for the US dollar.

Which is another way of saying “game on” for the crack-up boom.

Either way, it’s the death of the dollar.

Watch from over 30+ hours of RTD interviews here…