How The House Lost The Witnesses Along With The Impeachment 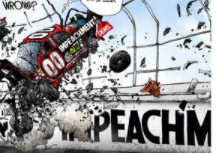 Below is my column in The Hill newspaper on the continued effort to ignore the obvious and catastrophic decision of the House leadership to rush the impeachment vote by Christmas rather than complete the record against President Donald Trump.

This denial continues despite the fact that, after saying that they had no time to seek witnesses or favorable court orders, the House leadership then waited a month before released the articles of impeachment.

Clearly, the record would have been stronger if the House waited and sought to compel witnesses. It also would have kept control of the record and the case. I encouraged them to vote in March or April, which would have given them plenty of time to secure additional testimony and certainly a number of favorable court orders.

However, recognizing this obvious blunder would take away from the narrative that the case failed only because the Republicans were protecting Trump in the Senate.

Here is the column:

NBC host Chuck Todd recently asked guests on his show if supporters of President Trump just want to be lied to. It is a question that many in the media would never ask about Democrats, even in the face of overtly false claims. This week is an example.

After the Senate rejected witnesses and effectively ended the impeachment trial on Friday, the media ignored the primary reason for the defeat, which is the insistence of House leaders to impeach Trump by Christmas.

Critics of the president simply do not want to hear that the blind rush to impeach guaranteed not only an acquittal but an easy case for acquittal. It is after all important for some members of the media to maintain that fools dwell only in Republican red states.

When I appeared before the House Judiciary Committee in November, I opposed four proposed articles of impeachment as legally flawed and explained that two would be legitimate if they were proven.

The House Judiciary Committee rejected the challenged articles and accepted the two articles on abuse of power and obstruction of Congress. That left one fundamental area of disagreement.

I warned the panel that it was rushing to a failed impeachment by insisting on a vote by Christmas. This was the shortest impeachment investigation in American history. It was also the narrowest grounds and thinnest record for trial. I have previously noted that witnesses like former national security adviser John Bolton indicated that they were willing to testify if subpoenaed, and that a couple months would have likely secured more testimony and supportive court orders.

Indeed, in the impeachment case of President Nixon, it took only a few months to go all the way to the Supreme Court for the final decision. So absent such a delay, the impeachment of Trump was guaranteed to fail, due to an incomplete and insufficient record. Yet the House insisted this was a “crime in progress” and there was no time to delay a submission to the Senate. It then immediately contradicted its rationale by waiting more than a month to submit articles of impeachment to the Senate. The House simply could not have made it easier on the president and his legal team.

The media ignored the obvious catastrophic blunder by House Speaker Nancy Pelosi and her leadership. The media instead suggested that it was all some grand and brilliant scheme. They even credited the strategy with Bolton eventually coming forward to say he would testify with a subpoena, even though the same offer was made during the House investigation. The media also ignored the unexplained decision by the House to withdraw a subpoena for top Bolton aide Charles Kupperman, who went to court as a prerequisite for testimony, the same position taken by Bolton. Before the courts could even rule, the House mooted the case by withdrawing the subpoena. That made no sense, and the court dismissed the case after concluding that the House appeared to have no interest in the witness.

No harm would have come from pursuing testimony by Kupperman. Yet lead House manager Adam Schiff offered a facially dubious explanation that Kupperman had said he would litigate the issue. If Kupperman truly wanted to drag out litigation, he could have refused to appear before the House and waited for it to seek to compel his testimony. Instead, he said he just wanted a court order in favor of testifying for his own protection. Moreover, House Democrats continued to seek to compel the testimony of former White House counsel Donald McGahn, despite his continued litigation. It won that case as the House was voting on impeachment.

As these blunders by the House became more and more obvious, all the efforts to excuse them became more and more absurd. One main defense heard in the media was that it did not matter, given the Senate Republican majority. Yet if the House was certain to lose on that record, why end the investigation prematurely with a case that would be so easy to defeat? By waiting only a few months, the record would have been stronger. Instead, House Democrats surrendered control of the record to the opposing party and adopted a ridiculous strategy of demanding concessions to end with this trial that Senate Republicans loathed. That strategy failed miserably.

This is not Monday morning quarterbacking. This very series of events was expressly laid out before the vote, and House Democrats made a decision to choose certain failure over completing their impeachment case. There was no reason to expect Senate Republicans to assist House managers in making their case, particularly in calling witnesses not subpoenaed by the House. Democrats had opposed any witnesses in the impeachment trial of President Clinton and voted as a bloc for a summary acquittal. There was no reason to expect Republicans to adopt an entirely different approach.

We will never know how this impeachment trial would have unfolded if the House had waited to secure additional testimony and court orders. One thing, however, is certain. The case against the president could only have become stronger. The vote for witnesses failed by one for a tie and by two for a majority. A more complete record could well have tipped the balance and certainly would have made the vote against witnesses more difficult for some senators. Instead, the House submitted an incomplete record and failed to subpoena important witnesses like Bolton, making it quite easy for the Senate to refuse to do what the House had never even tried.

None of the explanations offered by House Democrats make any logical sense. That, however, does not matter. As Todd said of supporters of the president, people “want to be lied to sometimes” and “do not always love being told hard truths.” The hard truth is that House Democrats lost this case the minute they rushed an impeachment vote, and they knew it. With the approaching Iowa caucuses, they chose a failed impeachment rather than taking a few more months to work on a more complete case against Trump, a case more difficult to summarily dismiss. That is the hard truth.