Here Is The Real Reason The Fed Restarted QE 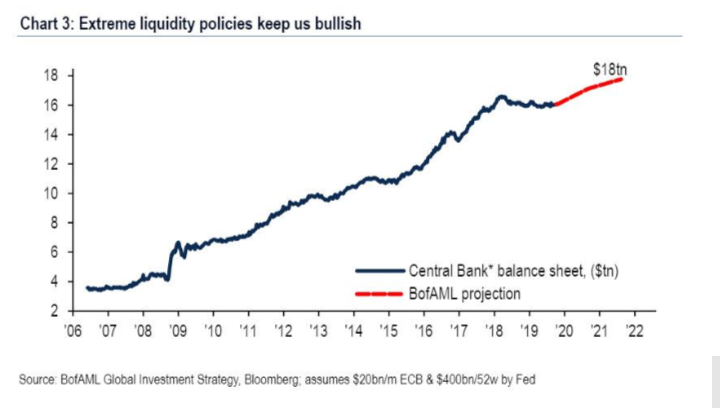 In the past month, a feud has erupted in the financial media and across capital markets between defenders of the Fed, who praise the return of its unprecedented easing in the form of $60BN in monthly T-Bill purchases, by refusing to call it by its real name, and instead the Fed’s fanclub calls it “not QE” (just so it doesn’t appear that ten years after the Fed first launched QE, we are back to square one), and those who happen to be intellectually honest, and call the largest permanent expansion in the Fed’s balance sheet, meant to ease financial conditions and boost liquidity across the financial sector, for what it is: QE.

It is this same “not QE” that has boosted the Fed’s balance sheet by $200BN in one month, the fastest rate of increase since the financial crisis.

Yet while the Fed’s desire to purchase Bills instead of coupon Treasuries was dictated by its superficial desire to distinguish the current “Not QE” from previous “True QEs”, even though both tends to inject the same amount of liquidity into the system, which as a reminder is what the Fed’s bailout role in the past 11 years has all been about, and only true Fed sycophants are unable to call a spade a spade, the Fed’s choice raises a rather thorny question of where the Fed will source those T-bills, because as JPMorgan calculates, the net supply of Bills in 4Q19 and 1Q20 is around $115-$130bn while JPM’s economists estimate that at least $200-$250bn of purchases could be required to return reserves to around $1.5tr where they were in early September this year.

That means the Fed might need to source purchases from money-market funds and foreign central banks – which paradoxically would serve to further drain liquidity out of the system. As such, given the limited alternatives, JPM’s Nikolas Panagirtzoglou believes that the Fed may be reluctant to do so and if they do, some may chose to leave cash in the Fed’s ON RRP facility which would represent a drain on reserves and make T-bills a less efficient vehicle for reserve creation.

Another key question: what if just returning to the previous reserve baseline is not sufficient, and the Fed needs to return reserves to a higher level than $1.5tr? Indeed, with close to $200bn of reserves injected via overnight and term repos for much of this week…

… helping to return reserves to around $1.5tr on a temporary basis from less than $1.4tr in mid-September, money markets appear especially vulnerable to volatility.

There is another reason why the Fed’s stated intention to only buy Bills will soon have to be adjusted to incorporate short-maturity (at first) Treasury bonds, and it has to do with the total open market purchases planned by the Fed. If the Fed would need to return reserves to a higher level, say to around the $1.7tr level in Dec 2018 when the 75th percentile of the Fed funds market began to persistently print above IOER, this could imply a further $200bn of purchases. JPM finds that “in principle” this could be completed in 2Q20 if the Fed were to sustain T-bill purchases at a pace of $60bn per month, which it set as the initial pace, but it would still imply a longer period of reserves being at a relatively tight level than if $1.5tr would be a sustainable level. But that would assume purchases at a continuous (rather than initial) pace of $60bn/m pace are sustainable, and ignores the prospect that purchases from MMFs and foreign central banks could prompt them leaving cash in the Fed’s ON RRP facility thereby draining some of the intended reserve injection.

Currently, close to $300bn of cash has been deposited with the Fed via the ON RRP facility, primarily by foreign RRP counterparties for whom the nearly $300bn is close to its recent highs. By contrast, other, largely domestic,  counterparties’ use of the ON RRP facility has collapsed to just $2bn, well below a high of nearly $450bn in late 2015, as institutions have a far more pressing needs for cash (liquidity) than collateral securities (“collateral shortage” was the big story in 2014-2017, just ask Zoltan Pozsar).

If T-bill purchases start to put upward pressure on ON RRP facility use, the Fed may eventually need to extend purchases to shorter-maturity Treasury bonds.

How and when the Fed shifts the composition of its purchases, however, is of secondary importance; a far more important question is why precisely did the Fed feel compelled to start monetizing debt, whether one calls it QE or not. The simple answer is that in a world in which all central bank-sourced liquidity is now fungible, JPM has found that without the Fed buying Treasuries across the curve, the ECB’s QE on its own would be unlikely to offset the negative G4 central bank duration absorption impulse from the BoJ’s efforts to re-steepen its domestic yield curve.

And that, in one sentence, is what really matters: not whether the Fed’s monetization of debt is called QE or ‘not QE’ (spoiler alert: it is QE as it injects liquidity, impacts rates, eases financial conditions and supports risk assets), but that without the Fed’s intervention, the global central bank balance sheet would shrink again, which if left unchecked would promptly lead to a market crash, the same way the markets crashed in late 2018 when QT was on “autopilot.”

JPM’s Nikolas Panagirtzoglou reaches that stark conclusion by revisiting his previous analysis that estimated the proportion duration that central banks removed from the market by adjusting both central bank holdings and outstanding government bonds to 10-year equivalent terms; back then, he assumed that instead of Bills, the Fed would purchase short-dated Treasuries. So, now that we know that the Fed will, for at least a few months, be buying Bills (before eventually shifting to shorter maturity bonds), the updated projections for the Fed is shown with the dashed lines (while the original one is the solid line).

Of course, the Fed’s asset holdings impact the global central bank balance shee: the dashed red line shows the impact of the Fed going down the path of T-bill purchases on aggregate G4 central bank duration absorption, which suggests G4 duration absorption is set to continue declining roughly in line with its pace thus far this year. In other words, the ECB’s net QE purchases alone look set to be insufficient to offset the impact of the BoJ’s effort to steepen its domestic curve. It is also the reason why the Fed has initially started monetizing Bills, and why in the very near future, the Fed will be compelled to expanding the universe of eligible assets to regular Treasuries.

What are the conclusions? First, the Fed’s choice of Bills to monetize leaves questions over whether the Fed will be able to source sufficient T-bills to facilitate a permanent increase in its reserves, particularly if it has to increase them significantly above current levels, and whether trying to do so would risk offsetting reserve drainage through increased use of its ON RRP facility.

… as Japan struggles to re-steepen its yield curve and which on October 1 caused a marketwide margin call, and sent shockwaves around the globe, the ECB’s QE on its own would be unlikely to offset the negative G4 central bank duration
absorption impulse from the BoJ. As such, the Fed had to step in, if only to keep the G4 central bank balance sheet from shrinking. And that – not whether it’s called QE or something else – is what matters, as that’s the real reason the Fed had to step in. As a result, as Bank of America’s Michael Hartnett recently noted, the fix is in again, and after going nowhere for 2 years, the central banks’ balance sheet is back to $16.1 trillion and is expected to hit $18 trillion in roughly two years.

Whatever you do, though, just don’t call the coming surge in the global central bank balance sheet to a new all time highs, QE.