Harvard Trained Economist: Housing Bubbles Are Bad For The Economy 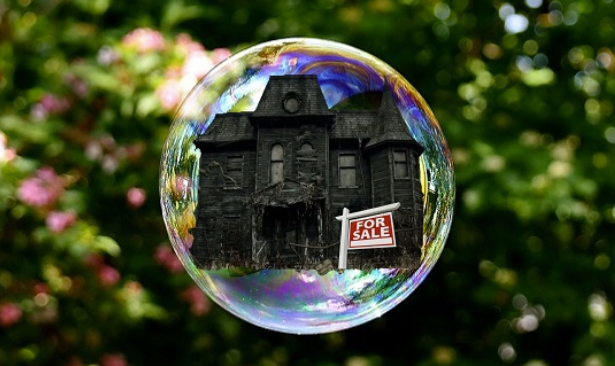 How can the same houses go up far faster than inflation for decades, and that possibly be good for an economy? It only benefits older people who bought earlier, and the affluent who buy the most expensive ones that tend to bubble the most.

I was just in Australia speaking to my favorite country and people. Their only fault is that they are currently “high” on their real estate bubble: Their bubble is greater, and 67% of their net worth is in real estate vs. 25% here. Only China is higher at 75%.

So, I asked them the same question that I posed to you at the top of this letter: How can this be good beyond the speculative gains that cannot be possibly be sustained and more than debt bubbles? People, especially younger ones, have to spend more of their budget on mortgages and rents – leaving less for their kids’ education, vacations, dining out and entertainment. Companies have to pay higher salaries to offset and that makes them less competitive with other countries.

Despite my clear stand on this topic, even I was surprised at this chart. The median age for home buyers since 1981 has risen from 31 to 47. Most buyers today are over their kid-raising cycle when they most need those houses and more space. That doesn’t make sense… except in QE and “Bubbleland.”

In the 1980s, home buying was dominated more by the Boomers in their starter cycle that peaked in a plateau between 1988 and 1992. It started at age 31 for the typical or median buyer in the middle (blue line). But the trade-up or repeat buyer trend (green line) was also ascending… and caused a spike up to 38 into 1993. As the starter home buyers fell off in the 1990s forward, it was natural for the peak buying age to stay higher.

But then the first housing bubble from 2001-2006 caused it to continue to rise to 45-46 as the young could even less afford. Since QE from 2009 forward, the median age continues to rise as homes continue to get less affordable, even though the Millennials are rising into their starter home peak into 2024. Note that their starter home median has risen from 31 to 33. (Zillow pegs it at 34 and still rising.) Many Millennials are waiting so long with high prices, low inventory and tighter lending – that they just skip the start trend and buy their trade-up home to start.

Their will be pent up demand for starter homes for the Millennials after the great crash ahead. But it won’t last long. Meanwhile rentals will hold up the best in the great depression ahead, as even fewer younger people can buy in a downturn with near non-existent credit ailable.Healthy real estate prices are 3–4 times income. Up to that, it is a good sign that a city or area is attractive. Beyond that, and especially at levels of 8-10 times income and higher, it is an impediment to the economy and to the people who live there, especially the young new families…

So, knowing all this, let me put another question to you: Who’s more important for our future: aging Boomers like me, who own appreciating real estate and are set to die over the next two decades, or the rising young generations?

by Harry Dent via Economy & Markets