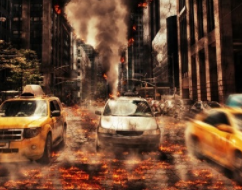 I hear underground rumblings that the number of infections is closer to 90,000. Wuhan, the town of origin, is completely shut down, as is the case with significant parts of 12 other cities.

This has been and will continue to affect China’s economy and its Asian trading partners.China’s stock market had been on holiday since January 23, due to the outbreak.

The Shanghai Composite opened down 9% Monday morning and closed down 7.7%. This was despite $174 billion in reverse repo injections that raised the net balance sheet by $22 billion. But that balance sheet would have fallen by $152 billion, which is tightening, if China’s central bank had not injected that much. And that is on top of the U.S., at $404 billion injections since mid-September.

U.S. stocks had its big fall on Friday, down 600 points on the Dow, but bounced this morning up 200 points to open. We are holding and China is folding.

Ralph Acampora, called the “grandfather of technical analysis,” sees this likely turning into a 10%+ correction and possibly the beginning of a major crash, more like what I am looking for. But I don’t see that yet unless this crisis really accelerates.

The recent Fed injections are bigger than the strongest at its peak QE – and this gives an excuse for even more – and in China, as well. The antibiotics for every ill is “print more money!”

I will be monitoring the Fed balance sheet every week, as it is updated on Thursday after the close. The demand for repo injections has abated for now. But last week’s T-bill purchases – good, old-fashioned QE – were $22 billion, or about $90 billion a month, and their declared intentions have been for about $80 billion a month plus repos when needed. If that continues, as I expect, stocks should be exploding up until the bubble blows between late May and the election, by my best calculations in the last two weeks.

I’ll keep you updated on this virus and these new injections that are just proving that the Fed can’t taper without the system blowing up – we’re hooked on “the crack.”

This repo crisis is not a short-term problem that will go away. And this virus may or may not be. It likely will get worse before it gets better, but it won’t affect the U.S. nearly as much as it’ll affect China and Asia, as the markets have thus far shown.